For the most part, Japanese role-playing games are like video game comfort food. For those of us that enjoy them, they’re a known quantity and rarely stray away from the flagpole franchises that we’re all familiar with like Dragon Quest and Final Fantasy.

We might have seen something of a resurgence in these sprawling JRPGs recently, but back in the Xbox 360 and the PS3 era, new games of this caliber were few and far between. Resonance of Fate initially released for the Xbox 360 and PS3 in 2010 and I never did find time to play it. Though a 4K rerelease of the gun RPG seems entirely out of left field, it’s great to see titles like this getting a second chance to thrive. 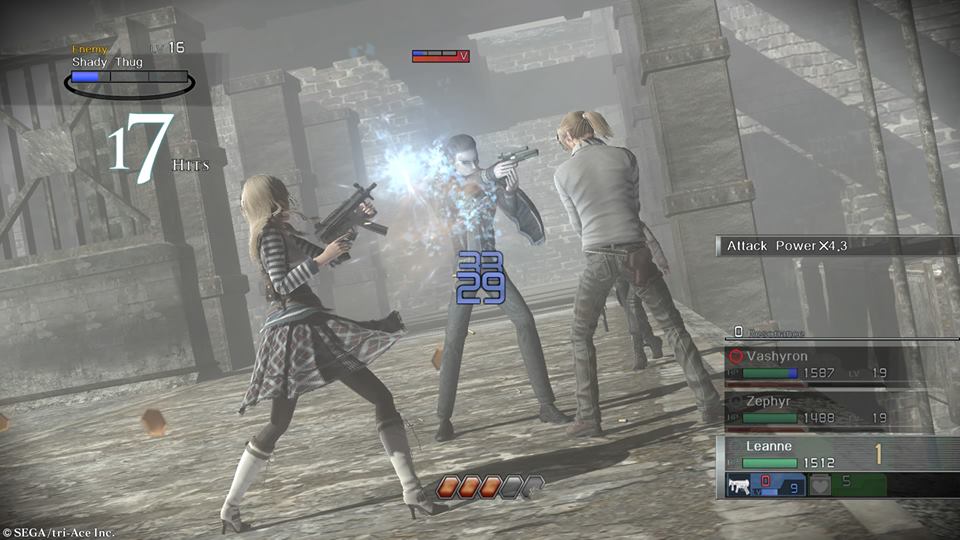 Resonance of Fate takes place on an Earth of the distant future where, surprise surprise, we’ve destroyed the environment to the point where our atmosphere can’t support human life. To get around this little setback, humans create Basel, a massive air purification system controlled by something called the Zenith system.  Eventually, humans build cities on the massive tower of Basel, but Basel doesn’t just control the environment. It controls every aspect of human life.

Society on Basel is broken up into a caste system. A person’s class is determined at birth and the higher your class, the higher in the tower you live. At the very top of the tower are the Cardinals, who otherwise act as the ruling class of Basel. Zenith even programs a “quartz system” that controls every citizen’s exact lifespan.

The protagonists of Resonance are Vashyron, Zephyr, and Leanne. They’re part of the middle class of Basel and work as Hunters, hired guns who make a living doing odd jobs. Everything from monster extermination to letter delivery. 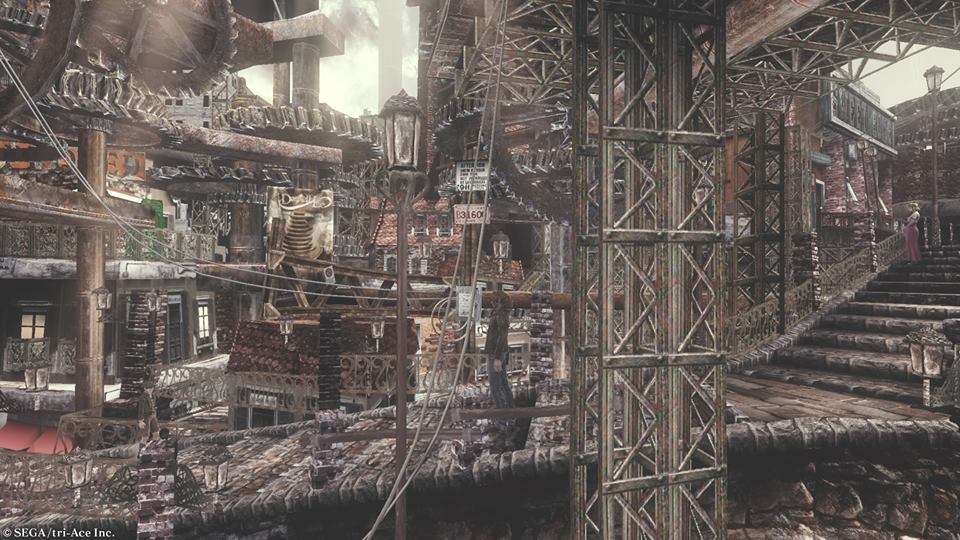 The world of Resonance of Fate is fascinating but is quickly squandered by its storytelling. The steampunk city has the potential to be great, but the plot takes forever to get off the ground and relies too heavily on canned character moments that don’t land. While you’re trying to figure out what exactly the fuck is going on, the narrative keeps jumping back to moments of off-color humor between our three protagonists that are more cringe-worthy than they are funny. I also wouldn’t come here looking for well-written villains. The ruling Cardinal class seems to spend a good portion of their time plotting and laughing about how evil they are.

The best part of Resonance of Fate is its combat, an insanely unique and complex system even the most seasoned JRPG veterans will require more than a few minutes to wrap their heads around. For starters, where most role-playing adventures are filled with swords and spells, Resonance of Fate is dominated by guns and grenades. It combines some classic turn-based combat with elements you would more commonly find in action RPGs. 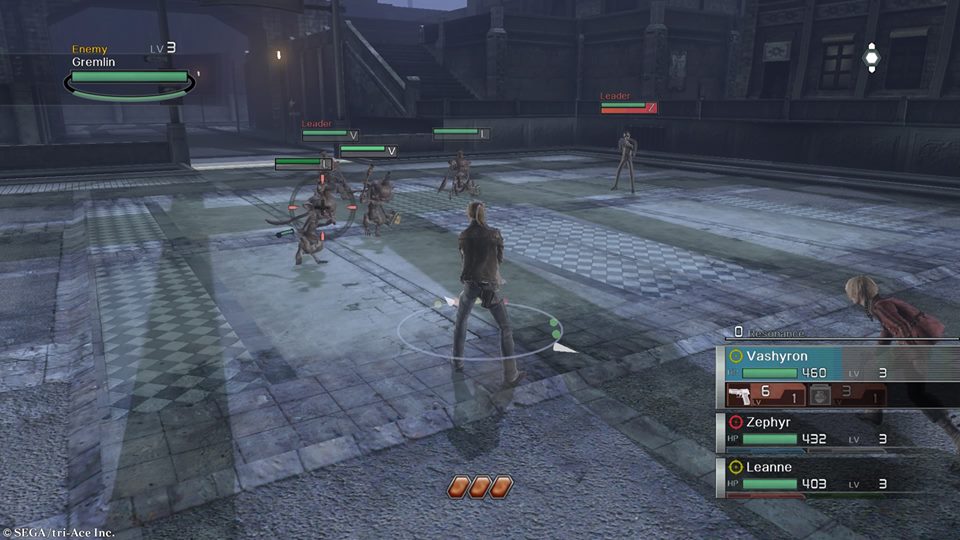 Players are given full control over all three party members during battle. You have all the time in the world to plan out your moves, but when you’re moving or using an ability like readying an attack, a timer starts draining. This allows you to quickly interrupt enemy attacks or have yours interrupted if you’re not careful. It also means one bad move can be the difference between victory and defeat; feeling pretty rewarding when things go your way.

The battle system is very confusing at the outset and is made harder to get a grasp of considering the optional tutorials aren’t directly accessible from a menu but have to be sought out at the local arena. You’ll have to balance learning complicated team attacks, mastering machine guns and pistols that deal different damage types, and in the end, Resonance is still one hell of a grind. There are plenty of enemy types in Basel but not enough to keep things fresh through the fifty or so hours of game.

Dungeons in Basel are laid out like one long encounter in which you move from battle to battle. An idea that is interesting on paper, but it ends up being a series of bland almost identical rooms in which you fight some basic enemies and then finally a boss. Also, if you end up deciding to leave and grind out a bit it means you’ll have to start the whole encounter over next time, and if you happen to find yourself low on Escape Hexes, the item that teleports you out of a dungeon, you’ll have to backtrack all the way out upon completion. 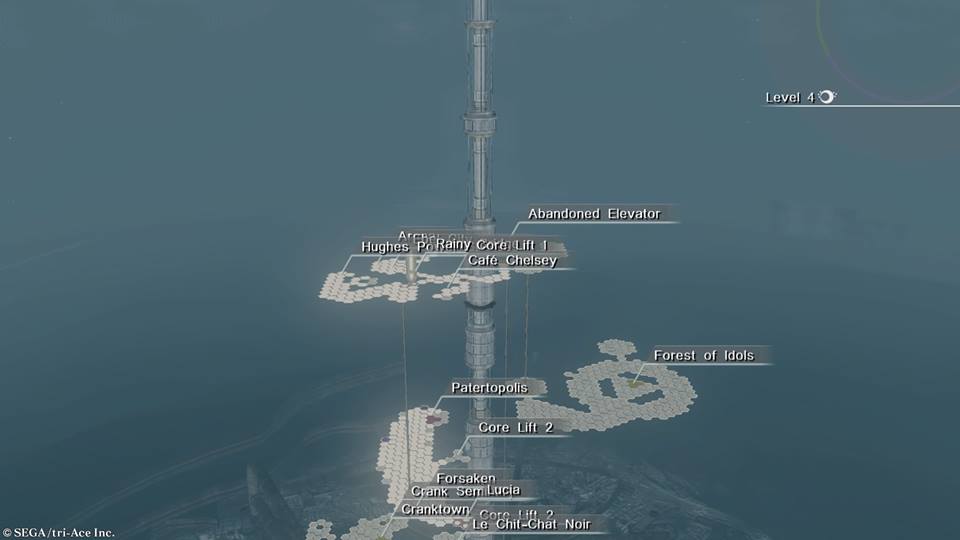 More interesting than the other varying systems in Resonance of Fate is Babel’s world map. The entire city is laid out in multiple levels on a giant hexagonal grid. The city is falling into disrepair, and certain areas have become untraversable. To combat this, you’ll need to lay down energy hexes you earn in combat. As you light up different areas of the grid, you’ll find hidden items, gain access to new towns, and opens lifts to other levels of the tower. Certain areas block progress by using color coated hexes only obtainable via story missions.

Resonance of Fate 4K/HD Edition is definitely a visual update from the original, but even in 4K, it’s still sort of an ugly game. The character and city design are just fine, but the whole color palette is muddy and dark. I understand going for an apocalyptic vibe, but it can’t hurt to pop a little more color into things.

If you’re a hardcore fan of Japanese role-playing games, then Resonance of Fate might be for you. The storytelling is far from remarkable, and the battle system requires a whole lot of patience and commitment. It wasn’t groundbreaking in 2010 and isn’t groundbreaking now, but there are a handful of neat ideas. I can’t help but wish they had done the work to make this updated version a bit more approachable via updated tutorials, but for those looking for that classic tale of a group of teenagers out to murder god, you’ll find comfort in Resonance of Fate 4K/HD Edition.