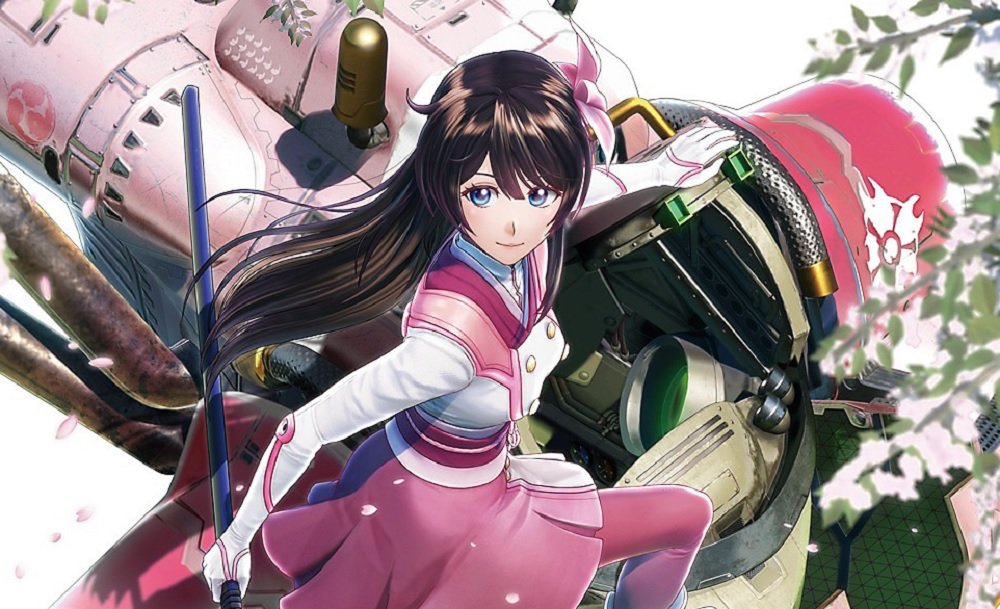 Times are tough for the Tokyo Imperial Theater. In the decade following The Great War, the International Combat Revue’s Flower Division has fallen on hard times. If it wasn’t enough that the theater troupe’s best performers never returned from the battlefield all those years ago, its replacement thespians are struggling to find their own identity in the looming shadow of those that came before.

Under-furnished, under-funded, and under-attended, the once-great theater has become a laughing stock to its audience, with its new cast desperate for direction, support, and guidance. It will be up to a stranger to bring passion and performance back to the rickety wooden stage, to help its promising-but-doubting young actors reach the peak of their dramatic potential. To reach, maybe surpass, the theater’s storied legacy…

…Also, to guide them in mech-riding warfare against armies of inter-dimensional demons aiming to bring about the global apocalypse.

Having been 15 years since the last release, many fans were sure Sakura Wars had taken its final bow. But with this, the sixth mainline entry and only the second to launch in the west, Sega is giving the franchise a fresh start. Powered by a new engine, starring a brand new cast of characters, and with only rudimentary connections to previous titles, Sakura Wars is intended as a “jumping-off” point for new fans and hopes to enchant them with its trademark mash-up of JRPG, visual novel, dating sim, and explosive mech-based combat. Curtain up.

Sakura Wars is a game of two distinct halves. “Adventure Mode” consists of a dialogue-heavy, character-driven RPG/social sim, while “Battle Mode” sees the cast take to their personalised mechs for demon-mashing combat. It’s important to note upfront, however, that Sakura Wars leans heavily on the former. At an estimate, the ratio of social sim to mech warfare stands about 70:30. This will come as no surprise to series fans, but should be clarified for newcomers.

Set in an alternate 1940s Tokyo, Sakura Wars puts players in the role of Seijro Kamiyama, a handsome young man who, in true anime fashion, has risen to the rank of naval captain despite looking 16 years old. He also carries two swords at all times. Yeah, why not? In the aftermath of the last demonic conflict, Sejiro is stationed at the Imperial Theater, where he is tasked with turning around the venue’s ailing reputation while cultivating its troupe of actors-cum-demon fighters: The Flower Division.

As Seijiro, the player is introduced to a cast of new characters, lovingly designed by Bleach creator Tite Kubo. Front and center are the Flower Division themselves: boisterous Hatsuho; studious Claris; deadpan child ninja Azami; stage diva Anastasia; and poster girl Sakura Amamiya. In time, Seijiro will also meet the theater’s staff and patrons, the local townsfolk, and other Combat Revue representatives. Adventure Mode amounts to wandering the theater and its surrounding locations, engaging in lengthy conversations with the cast, and getting embroiled in silly shenanigans. From minute one, Sakura Wars is wholly personality-driven. The emphasis on building close relationships through dialogue choices and running errands is the spine of its gameplay.

While at first glance Sakura Wars might seem reminiscent of a Persona 5 or a Yakuza, it doesn’t have quite the same level of activity to offer. There is no buying-and-selling in stores, for example. The town exists merely as a stage for character interaction, scene-setting, or – for smooth-tongued Lotharios – starlit dates. Sakura Wars does have its share of fun side-activities, however, including combat simulator Battle-Bot, traditional card game Koi-Koi, and a habitual obsession with collecting hidden “bromides” (or photographs). Overall it does lack the variety of similar “stroll around town” RPGs, instead choosing to focus squarely on conversations and relationships.

It’s fortunate, then, that Sakura Wars successfully hits it out of the park with its delightful new cast. These characters, while admittedly as tropey as any other JRPG, are simply a joy to engage with. Dialogue-centric games necessitate good scripting, and while some eyes may roll at the inevitable cheese and creep factor that occasionally rears its head, the conversations had in and around the city are almost always a pleasure, rarely a chore.

The striking charisma of each character is a testament to Sakura Wars‘ excellent vocal performances. Despite only featuring the original Japanese voice track, every spoken nuance – from sorrow to shame, happiness to sarcasm, comedic timing, and everything in-between – all hits with vigor and clarity. Each character brings a unique dynamic to the dialogue, whilst Seijiro himself is a solid protagonist, if scattered in his moral center. The flawed, down-to-earth nature of the cast helps endear them to the player, even if their individual character arcs are somewhat plain.

Perhaps most surprisingly of all, the writing is often very funny. Not “OMG! Girls’ Pants!” funny (although plenty of that material exists herein), but legitimately witty. Many scenes are loaded with smart comebacks, dubious misunderstandings, expressive reactions, and even some classic physical comedy. It can be difficult to resist “breaking” the narrative by intentionally choosing the worst dialogue options simply because you want to see the unfolding social disaster.

Eventually, inevitably, all the gals get gooey-eyed for our boy Seijiro, enabling clumsy dates and “communication” scenes. The latter are weird first-person sequences where you literally click on your favorite gal’s hair, lips, and cheeks while she blushes and stammers “W-what is this thing that you call ‘k-kissing?'” Ok, maybe not exactly that, but you know the score. An integral part of the franchise, Sakura Wars‘ romance scenes bounce between coy and, frankly, creepy-as-fuck. Successful trysts will unlock battle bonuses, special bromides, and custom endings.

Out of interest, I somehow ended up dating an entirely different girl to the one I was actually trying to court, which should give you some idea as to why I’m such a total catch in real life… Stop laughing.

At the climax of each chapter, plot necessity calls The Flower Division into Battle Mode. What follows is, for want of better description, stripped-down Dynasty Warriors gameplay as Seijiro and Co. take to the Dark Realm for demon-smashing showdowns. At this point, it becomes apparent that the action sequences are unequivocally the “side mode” to the game’s social elements.

Now, that isn’t to say that action is Sakura Wars is terrible. The character models are slickly designed, the visual effects are stunning, and the fights are technically proficient – with nary a single frame-drop in sight. But the combat is super-simplistic, both by design and in nature, boiling down to mashing out the same optimised combo repeatedly until everyone’s dead. Throughout my playthrough, I never once lost a fight, wiping out armies of demons with absolute ease. The Flower Division was virtually unstoppable come the final act, defeating major boss characters in seconds. What did you expect? I wasn’t made a naval captain for nothing…wait, I wasn’t made a naval captain at all.

The action has its plus-points. Incessant chatter keeps the fight “alive” with personality, the player can switch out their character for variety, and there are some stylish, cinematic special maneuvers. But it should be clarified that Sakura Wars‘ priorities lie definitively with its social elements. I guess you can’t fight mechs when there’s still head pats to be dished out and bakeries to visit.

Where Sakura Wars shines – truly shines – is in its magnificent presentation. From its wonderful opening sequence, which I watched every time, to its emotional climax, Sakura Wars buzzes with energy. It boasts a majestic score by Kohei Tanaka, with the One Piece composer’s soundtrack packed full of infectious themes and well-fit compositions. Accentuating scenes of hope, tragedy, joy, goofiness, and celebration, the score is as much a leading character as anyone in The Flower Division.

For all of its peaks and pitfalls, it’s crystal clear that Sakura Wars really, really wants you to fall in love with the franchise. It goes above and beyond to bewitch the player with its upbeat tone, colourful settings, and friendly characters. The whole adventure is dripping with an infectious “feel-good” positivity that gets under your skin. What it lacks in deep, engaging combat, and interesting side-attractions, Sakura Wars makes up for in heart, a game enthusiastically hoping to welcome you into the Imperial Combat Revue family.

Personally, I had a great time with Sakura Wars. I was in love with its characters, I dug its witty script, I enjoyed its triumphant tone, and I’ve been humming its indelible score for weeks. If you are up for an exciting anime tale packed with dialogue, drama, and dating, then grab a front-row seat. But those expecting an action-heavy title that prioritises deep combat, knife-edge boss battles, intricate plotting, and not a lot of “looking wistfully out of windows” might best be served elsewhere, or left waiting on a discount. Sega has been mostly successful here, but there are definite lessons to be learned for future entries.

Sakura Wars represents an ambitious new start for the franchise, one that might not be to everyone’s tastes. While its mediocre combat and dialogue-heavy design may leave some players disengaged, its fabulous presentation, pleasing visuals, delightful characters, and histrionic melodrama will delight others. Perhaps most importantly, it offers the franchise a bright future bursting with potential. Encore!