Save the day (for a nominal fee)

I’m sure I’m not unique in saying this but I’ve had a lifelong affinity for theme parks. It’s always been my dream to pull a Dolly Parton and buy one to call my own.

I know that’s not going to happen — Destructoid doesn’t pay that well — but the idea of having a park full of rides, games, food stands, and themed bathrooms has stuck with me since childhood and is the daydream that most often pulls me away from whatever it is I should be doing. Even now, as I write this review, I want to stop and picture this imaginary park that I’ll definitely, probably, most likely never own.

I can pretty much map out everything I’d want in my fantasy park, but after playing through Heroland I’m going to need to make some additions, because this game is giving me ideas. 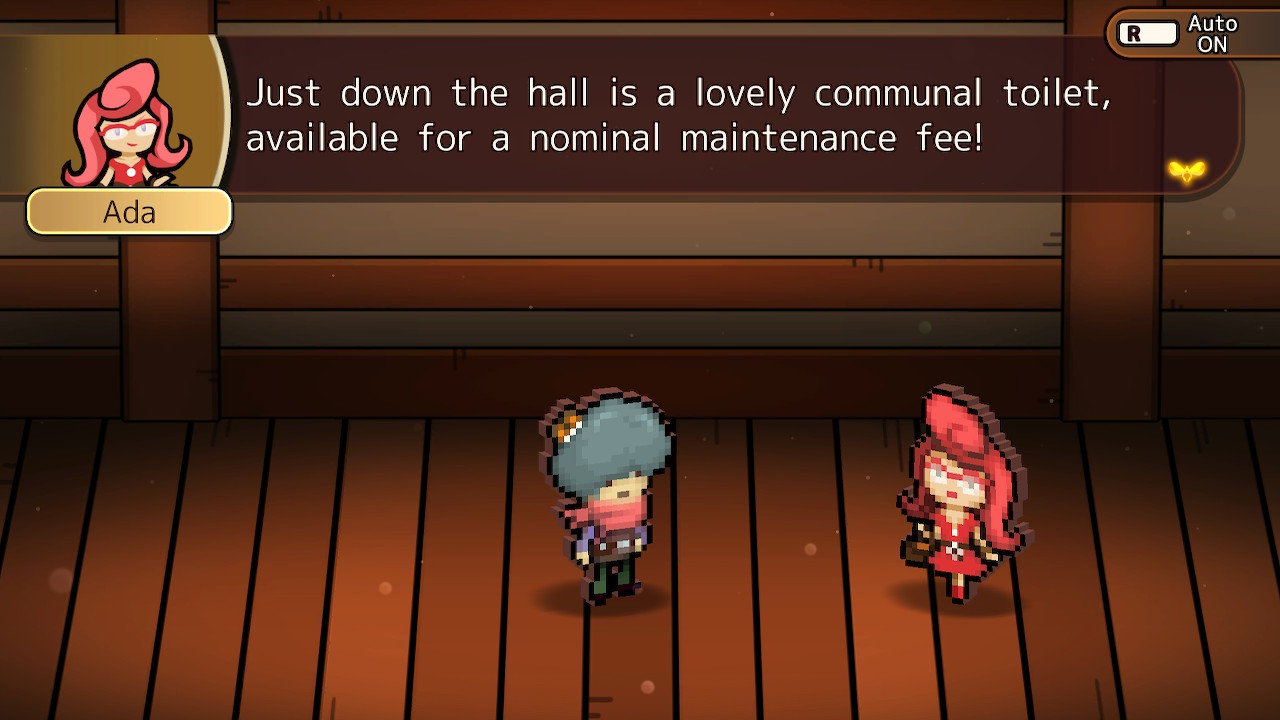 Set in a charming amusement park built on a historic island, Heroland is the story of Lucky, a not-so-lucky guy from the mainland who leaves his dirt poor family behind to make something out of himself at this RPG theme park. His family’s rooting for him, but right after accepting the gig he realizes this won’t be some sort of easy job. The only way he’ll climb the corporate ladder is with help from Prince Elric, the 18th in line for the throne who is way too old to be thinking characters at a theme park are the real thing.

Much like a six-year-old girl who believes the Ariel at Disneyland is the “real” Ariel from The Little Mermaid, Prince Elric wholeheartedly thinks the story at the center of the Heroland park is true. Many years ago, a band of heroes came together to defeat the Dark Lord. That Dark Lord, or at least a cast member portraying the Dark Lord, serves as the final boss of this turn-based theme park and Elric believes if he can defeat him, he’ll jump back up to first in line for the throne.

The adventure of Lucky and Elric make up the bulk of Heroland‘s charming narrative. It’s written by Nobuyuki Inoue, who also wrote Legend of Mana and Mother 3. Inoue and the localization team at Xseed are at the top of their game here as Heroland is, without a doubt, the funniest game I’ve played this year. It’s not even a contest. The dialogue is sharp and rife with reference humor, memes, puns, and so many tried-and-true jokes. There are so many one-liners and zingers I had to turn off the auto-scroll text option because I was missing too many punchlines.

Not only is it funny, but the central characters are incredibly well-written. Lucky may be a silent protagonist but the people surrounding him are anything but. Prince Elric has a fully realized character arc, Otterman — the otter who’s pretty sure he’s human — is a nihilistic storyteller, and Lucky’s fairy Lua is never one to spare a bit a sarcasm. Even the ancillary characters don’t skimp on the laughter. I was in stitches when the mom with a bird in her hair showed her true colors at the end of one of the dungeons.

On its story alone, Heroland is an easy recommendation. However, when it comes to the turn-based RPG elements, that recommendation becomes somewhat uncertain. Lucky may be the protagonist of the game but he’s not directly involved in any of the combat. He’s simply a tour guide in this park, guiding parties of four through dungeons to do battle with monsters/coworkers. The parties are made up of the guests at the park and often, throughout the story, you’ll be required to have certain characters as part of the team. These guests will have a preferred role to play, such as tank, warrior, healer, or freelancer; and before you guide them through each dungeon you have to equip them with the right weapons for the task at hand.

The actual dungeons are presented as a series of battles and events on a set path that leads you to the final boss and treasure reward. There is no exploring, though the path does often diverge. When you are in battle, party members will act on their own. They’ll choose their attack and their target without any input from their tour guide. However, you can influence their decisions. Lucky can offer suggestions during the heat of battle to guide your team to victory. You can advise characters directly, choosing their attack for them, or use flags to dictate the actions of the whole party. It’s not full and complete control, but smart advice can change the tide of battle. 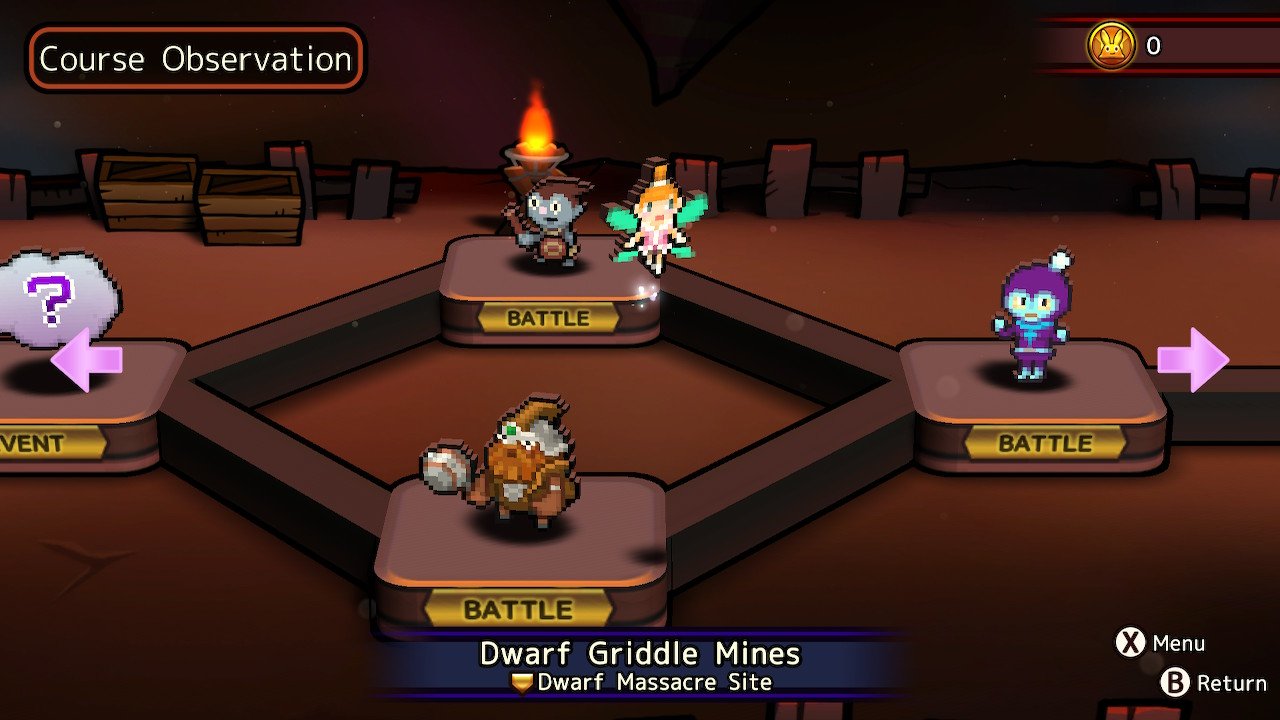 There is a cooldown each time you advise, so the strategy as you advance further into the game is knowing when to assist your team and when to wait it out. Attack lines from the enemies to the party — and vise versa — as well as the ATB gauge under each character can help you make decisions about when and how to act. In addition to advising the team, you can also heal them or cure a status effect with an ointment from your far-too-small pouch.

Both Lucky and the guests level up at the end of dungeon runs. Coins you collect from defeated monsters go to level up the guests. Their satisfaction with their dungeon venture, gauged by a smiley face meter for each party member, levels up Lucky. As he levels up, the cooldown for his assist meter decreases and he’s able to hold more items in his bag. There is also a friendship meter for each guest, and as that levels up you’ll unlock side stories for those characters.

The battle system and its hands-off approach may not be how I usually enjoy role-playing games, but it does a fair job at keeping me captivated. At least until I hit the point where I needed to grind certain characters to continue. Guests who are not part of your party will benefit a little from shared XP, but not enough where you can comfortably swap them in without being handicapped in battle. This forced grind takes up a bit too much of Heroland‘s playtime. You can increase the speed of each fight, which is a feature I used extensively when I had to run through old dungeons to level up my characters, but the flow of the gameplay and story would have been better off if the developers found a way to keep the grind to a minimum. 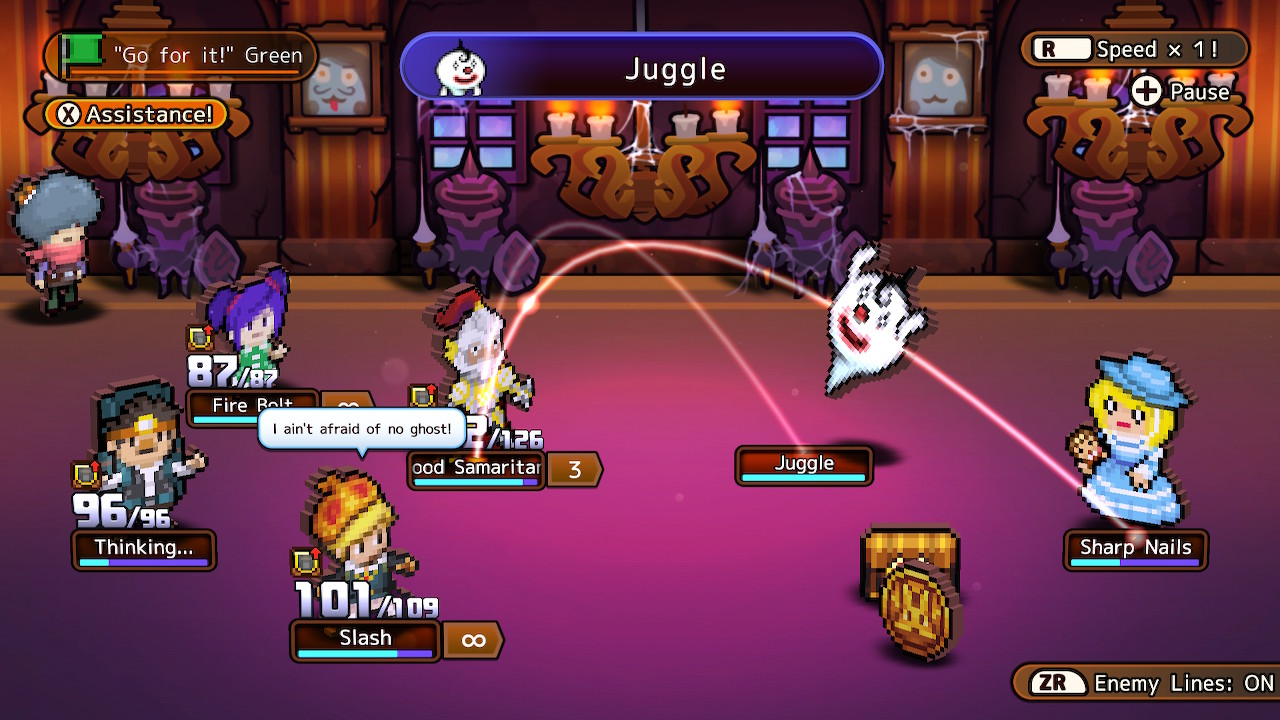 One other facet players need to be wary of has to do with the weapons. Each character will have three different attacks: a melee attack it can use endlessly, a special character attack specific to that guest, and a special, weapon-specific attack. Characters are limited in how many of those special attacks it can use throughout a dungeon and if a party member depletes their weapon attacks, they may break the weapon. And if they break it, you buy it.

It’s not as annoying as it sounds but it does play into the underlying theme permeating throughout Heroland, which is that capitalism sucks. It’s not even subtle about it. Lucky, as well as several other cast members, are basically slaves to the park. They’re paid in scrip. They have to buy supplies for guests to use. They’re not allowed an appropriate work-life balance. Cast members who can’t speak English are paid far less than their co-workers and are slowly being replaced by automation. Some employees are mutilated for the good of the park. All of this is presented with tongue firmly in cheek, but I’m in awe at how openly anti-corporation this game can be.

But even when it’s not sounding like an improv group at a Bernie Sanders rally, Heroland is a gem. It’s incredibly funny, the characters are some of the most charming I met all year, and its unique take on turn-based battles made a strategist out of me. I just wish I didn’t need to do so much grinding to see the game through to the end.