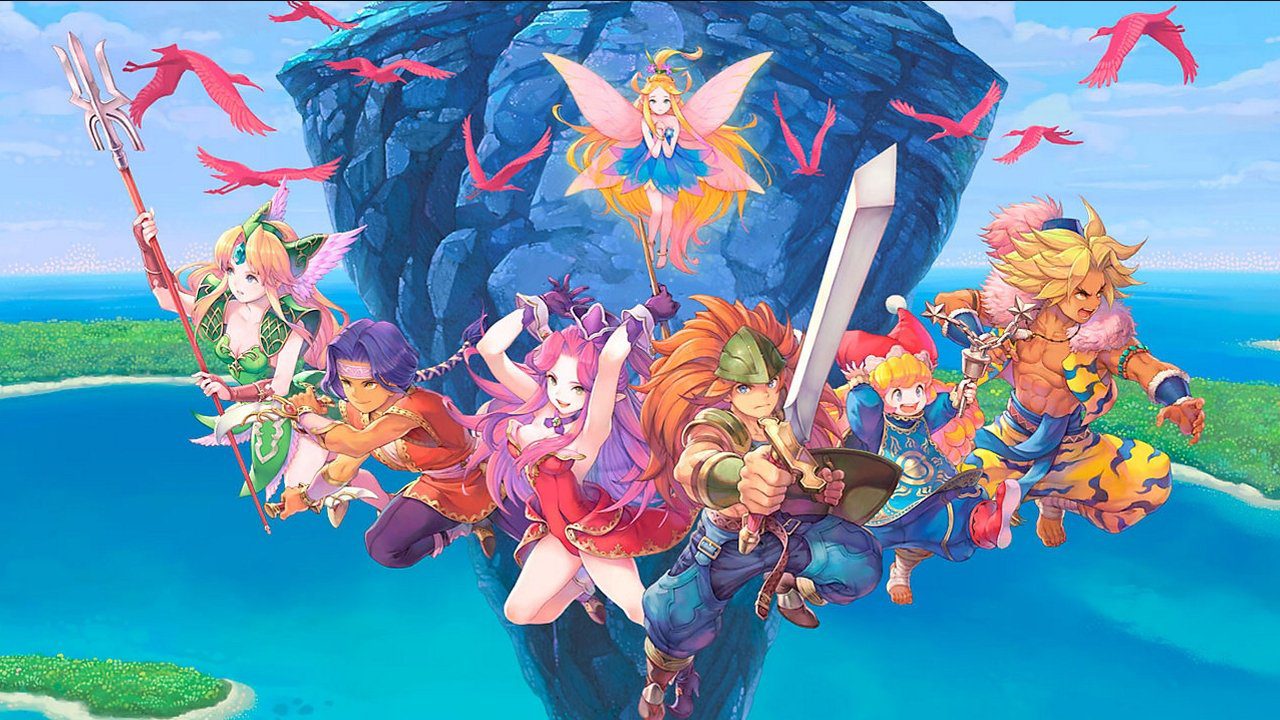 Remakes, no matter their quality, are always a tricky business. How much of an old game’s ideas or mechanics do you preserve? What do you update, reinvent, keep as-is, or discard outright from an old game that won’t betray its essence, or rile up its fans, while still making it appealing to people new to the experience? After all, the stated purpose of most remake projects is to bring that old experience to new people.

I’m one of those “new people.” As I mentioned in my initial impressions of Trials of Mana, I have effectively no experience with Secret of Mana or its SNES-era sequels, knowing them only as Squaresoft games considered by many to be timeless classics.

Now that I’m done with it, the question remains: How did Square Enix’s attempt to bring the legendary Seiken Densetsu 3 to modern platforms and contemporary audiences (read: people like me) work out? Does Trials of Mana pass its own trial?

It took me a few hours to finally notice it, but a little bit after I complained about the NPC AI in the previous piece, I noticed the “Strategy” tab in the options menu. That tab allowed me to modify the whole party’s behavior, including sliders that adjusted how often they’d use magic, healing items, and special moves. That made my party – Altenish mage Angela, hot-blooded fighter Duran, and polite Amazon Rieze – much more survivable in most situations – though I still had to flip back and forth between characters sometimes to ensure they’d stay out of the boss monsters’ danger zones.

The zones are emblematic of where Trials of Mana‘s upgrades work best – its snazzy new action combat system. With simple, snappy combos, instant dodge-rolls, and quick access to special moves mapped to the shoulder and face buttons, Trials of Mana‘s combat feels responsive and breezy. In standard battles, things move quickly, with characters doing a good amount of damage (provided they’re in the right level range) and the system rewarding more experience points and cash for ending fights quickly. Boss battles merge this lightweight character action with MMO-style raid logic that hinges on keeping party members safe from the dreaded red circles and rectangles while maintaining the presence of mind to exploit elemental weaknesses and keep everyone healthy.

Undergirding all this is a simple, but well-tuned progression system based on customization and classes. As with the older game, all six playable characters in Trials of Mana have a specific class. Leveling up past a certain threshold unlocks two more upgradeable classes, each with a different play style.

For example, upgrading Duran to a Knight gives him the ability to equip shields for a defensive stat boost and adds a healing spell to his move list, but opting instead for the Gladiator ups his damage output and unlocks spells that add elemental damage to his normal attacks. These upgrades are further gated by allocating Training Points earned by leveling up. Further class upgrades are influenced both by the previous choices – choosing one class locks you into a different set of choices unless you reset your progression with a special item – and the acquisition of certain items.

All this allows for a healthy amount of customization even within the relatively static classes themselves, as well as for a satisfying sense of min-max power growth. By the end of the game my work had paid off handsomely. Angela was a magical powerhouse, basically capable of spamming high-power spells non-stop, and never worrying about running out of MP. With Duran healing her and Rieze buffing her stats, I could make short work of almost anything that wasn’t expressly immune to magical attack, even bosses.

As satisfying as the combat in Trials of Mana feels, though, the narrative hasn’t quite held up as well in my jaded eyes. I’m old and have played a lot of games, so my preferences have shifted away from Trials’ earnestly straightforward tale of good guys saving the world from bad guys. On the one hand, not every game – or remake of a game – needs to be “in dialogue” with itself and the world at large. On the other hand, game narratives still need something, and by my lights Trials of Mana lacks the strong, endearing characterization that makes a game stick out in the mind, especially this distant from its initial influence or the nostalgia of childhood memory.

It doesn’t help that the good bits are straight-up missable, or have unfortunate rough edges. Choosing the wrong party combination can result in a strange, disjointed narrative experience, as plotlines get resolved and quest steps move forward without clear transitions or connections between the characters. The English localization, particularly the dub, also doesn’t do itself any favors. I can’t pretend to know the circumstances affecting the production, but in spots, Trials of Mana‘s localization feels like a case where not having it at all might have been a better choice. Some voiceovers feel like they were recorded off a Skype call, with odd volume normalization. Other choices, like writing all of Charlotte’s lines in a baby-talk-like effect, make characters almost intolerable. The Japanese dub, while not amazing in and of itself, is at least more consistent, and features voice actors anime fans may recognize.

The story also loses narrative steam about two-thirds of the way through. It throws players into what amounts to a lengthy boss rush, followed by a less interesting boss rush inside a dungeon. Lastly, the additional content added for the remake is also somewhat awkwardly implemented, coming across like a DLC pack intended for post-launch release folded into the main game. Accessing it requires a completion of the main story, but loading it up teleports players to just before the final dungeon, saddling players with a 2-3 hour side quest and a single long dungeon, culminating in a large boss fight that has little in the way of narrative substance, and no impact on the narrative beyond adding a few fun wrinkles of character development to the leads. The new classes are at least powerful, though, and the character models look good, so it’s worth playing if you’re having fun with the combat.

Ultimately, remaking old games can be tough, but at a base level, the goal is pretty simple: To bring the best bits of an old game to life in a way that a new audience can appreciate. Trials of Mana accomplishes this goal handily. In a sense, it’s an ideal remake, holding tight to the core of what made the original game (and the Mana series as a whole) so compelling to so many people at the time, while bringing a novelty and freshness to attract neophytes like yours truly.