Regular Show is one of my favorite shows on TV right now. It took the simple Beavis and Butthead setup of two slackers getting through their day-to-day routine, and added a bit of ’80s and retro sheen to it, alongside a cast of likable characters.

Imagine my excitement when I found out that WayForward would be handling an old-school 3DS platformer called 8-Bit Land with the Regular Show IP; it’s a perfect fit. After playing it that excitement has been tempered considerably, but it still has a few tricks up its sleeve to offer the most hardcore of retro fans a good time. 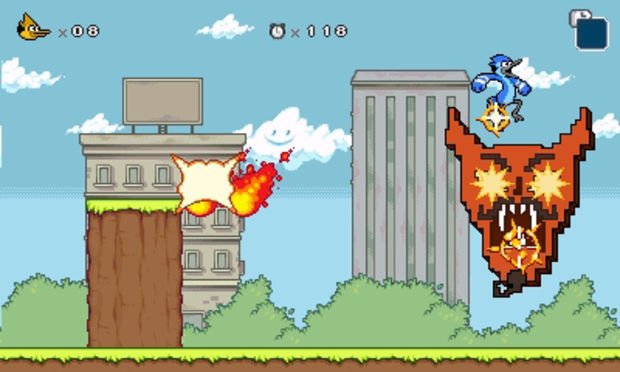 I hope you weren’t expecting something that plays out like an analog of the show, complete with signature drama and friendship-testing conflicts, as 8-Bit Land‘s setup is basically “Mordecai and Rigby get sucked into a game console and have to fight their way out.” The visuals and presentation will most likely underwhelm as soon as you boot up the game, mostly due to the fact that there’s no voice acting, and no ancillary characters outside of Benson (who shows up for around 10 seconds). The 3D effect is also fairly minimal, but like 3D Classics: Kirby’s Adventure it adds a tiny bit of personality to the art style to give it a much-needed boost.

But as retro fans often know, graphics aren’t everything. Since this is a mostly straightforward platforming affair, the core gameplay is where 8-Bit Land shines. There’s a very cool switch mechanic that allows you to press one button to change between Mordecai an Rigby, both of whom are equipped with different abilities. Mordecai is a bit more limber, and has a double-jump ability, and his counterpart is lower to the ground, allowing him to run into tunnels and other smaller places.

It sounds simplistic, but the way it’s executed is near flawless. You can switch between the two at any time (even in the air), allowing for some flexibility in terms of how you approach the game. You can use Rigby to run through an area, jump into the air, switch to Mordecai to double jump, then switch back to Rigby. You’ll also have the ability to use either style for essentially the entire level, so for the most part you can play as your character of choice outside of a few locations.

There are a number of retro references afoot, including a Mega Man-style “beam down” level intro, an armor mechanic that pays homage to Ghosts ‘n Goblins, a Gradius space ship, and a few level themes that feel like direct nods to DuckTales. None of it will blow your mind (that’s the theme 8-Bit Land really), but anyone who grew up in the ’80s/’90s era will crack a smile here and there.

Levels have three golden tapes hidden in them to unlock a few extras, as well as cash (that functions like Mario‘s coins), and power-ups. After clearing a stage you’ll have the opportunity to earn extra lives or more cash  by betting money or 3DS Play Coins in a game of chance. While it’s not essential, it’s always appreciated to see the Play Coin system alive and well.

Once you’ve cleared a few worlds the game opens up, as you’ll unlock the Gradius-style space ship for special shoot-’em-up sections, and the ability to drop into a top-down isometric view, Smash TV style. These abilities only work in certain areas (designated with space-themed or grey wallpaper), and work in tandem with character switching to allow for some crafty combinations. You’ll have to master every mechanic together at once to unlock each level’s golden tapes, which was easily the most fun part. 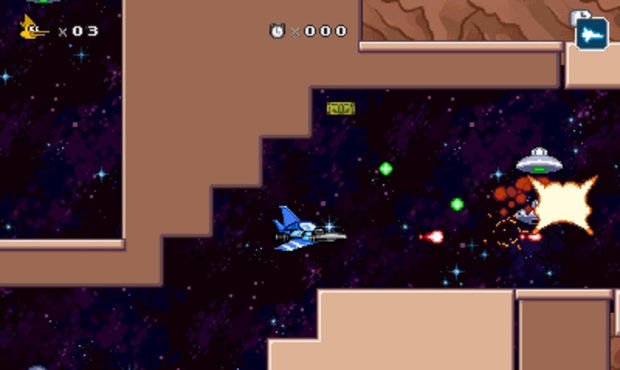 Like any old platform worth its salt a traditional boss will cap off each world, and they’re all fun enough in their own right. In typical retro fashion I felt a sense of accomplishment after besting them, combined with a sense of confusion as to why I didn’t conquer them on the first try.

There aren’t a whole lot of extras, which is disappointing when you consider that 8-Bit Land is only a few hours long. In addition to a sound/music test unlockable, there’s also a concept art gallery, cheat codes (cleverly delivered with a device called the Game Djinn), and a New Game+ mode with tougher enemies. WayForward had a chance to add in a whole lot more here and ape the concept of DLC and microtransactions, but didn’t — so what you see is more or less what you get.

Mordecai and Rigby in 8-Bit Land feels a lot like one of my favorite DSi platformers no one played — Pro Jumper: Guilty Gear Tangent. It pretty much knows what it is, even if it doesn’t offer up anything new for those who normally loathe platformers. So while it feels a bit phoned in at times, fans of old-school gaming will no doubt get an afternoon of enjoyment out of it.