I thought I knew exactly what to expect with Pokémon Picross. Picross, but with pictures of Pokémon. Sold. That’s all I need. Give it to me now.

I even joked with our reviews director Chris that I could probably write this review without having played any of it. As it turns out, I couldn’t; there’s more to it than just that. At its core, it’s still Picross, but there are a handful of tweaks and additions. It’s mostly for the better, but some of the new mechanics could be a turnoff. 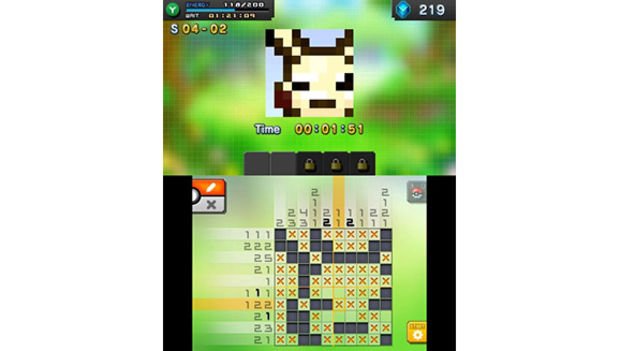 “Picross” is the term Nintendo uses for the logic puzzles more commonly called “nonograms.” The puzzles have an elegance to them; they are built upon just a few simple rules, but those rules result in a network of tips and tricks for finding the solutions.

The solutions themselves are typically more interesting than a sudoku, kakuro, or ken ken. Rather than ending up with a grid filled with numbers, a well-built picross puzzle creates an image, adding an extra reward at the end. Not only is there the intrinsic satisfaction of having found the solution, there’s the bonus of having created a monochromatic, pixelated piece of art.

Pokémon Picross capitalizes on that reward at the end even further. Not only does it offer the usual puzzle goodness, but completing a puzzle also nets the player a Pokémon. It doesn’t matter how many times and in how many forms I’ve caught ’em all, the drive to catch ’em all here is just as strong.

The Pokémon confer special abilities to use in puzzles. Some automatically reveal a section of the puzzle. Some provide real-time hints or fix mistakes. Some manipulate the timer, slowing it through a run or stopping it entirely for a short period of time.

For the picross purist, it feels strange using these abilities at first. Indeed, it’s entirely possible to go into a puzzle without setting any Pokémon in the team. For a while I did just that, playing classic picross; it was just my wits versus the puzzle challenge.

However, another addition threw that off for me soon enough. Most levels include bonus missions past completing the picture. Some of the missions are simple: use a certain type of Pokémon or activate a certain ability. Those vary from puzzle to puzzle, but every level has a timed challenge. While many are easy enough to surmount unassisted, some would be downright impossible without abilities. One time, I went up against a 15×15 grid asking me to finish it in less than a minute. I set up my team carefully, bombed a huge chunk out immediately, activated a time freeze, and highlighted important clues. I finished with the timer reading only four seconds, and it felt awesome. 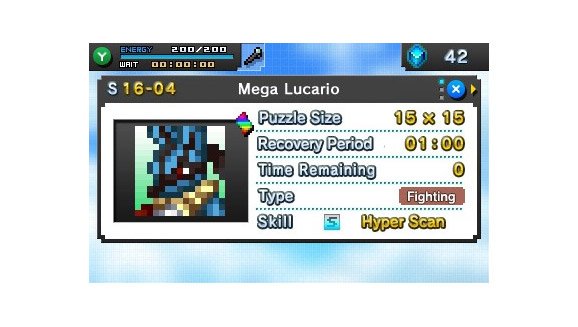 A potential downside to the mission structure is that it requires backtracking in order to fully complete everything. Some missions will pop up that ask for a certain Pokémon that hasn’t been encountered yet. On the one hand, it adds replay value for completionists, but on the other, solving the same puzzle multiple times isn’t as fun as taking on new puzzles.

One of the reasons to go back and complete missions is another cool addition to Pokémon Picross. Some challenges will award a mural piece. These are small 10×10 puzzle grids, but they come together in an 8×8 mural, creating a much higher resolution image over a much longer period. I haven’t finished a mural yet, but I’m looking forward to seeing it come together.

The last big tweak is the inclusion of mega rows and columns. These only appear in a separate path, which mirrors the main path exactly. These add a new mechanic to the nonograms, with numbers that span two rows or columns describing an amorphous chunk of pixels rather than a neat line.

For picross enthusiasts, this is a huge change. After doing hundreds (thousands?) of these puzzles, the process can become rote. Even with ever-changing target images, certain number patterns can emerge and a general algorithm can be followed. The mega rows throw a wrench into that, forcing the player to actively reason through it and use more advanced logic than usual. I welcome the new mechanic, but I can imagine purists shunning it. 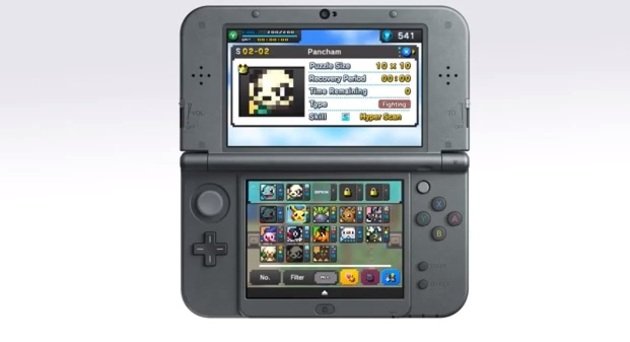 By far, the biggest psychological hurdle players will have to surmount with Pokémon Picross is its pricing presentation. It is advertised as “free to start,” which some might interpret as free-to-play. Indeed, there is an energy mechanic and a separate currency (Picrites) that can be purchased with real money. It looks and acts like a free-to-play game at first glance.

It is (probably) technically possible to play it in its entirety without spending a dime. Picrites are required to unlock new sets of stages, and after exhausting the available missions, Picrites can be earned indefinitely through the daily challenges. However, Picrite income is dwarfed by spending. Early on, a single daily challenge awards about five Picrites and level sets can easily cost in the hundreds. One single Mega Pokémon level costs 500 Picrites, which would take ages to grind out.

Thankfully, Pokémon Picross does what I wish most free-to-play games did. After spending enough money — about $30 — on Picrites, the currency supply becomes infinite. With those infinite Picrites, players can make the energy bar infinite as well. Essentially, putting enough money in turns it from a free-to-play into a standard-style retail game. There’s no more waiting for a timer or being gouged by microtransactions, just playing. To look at the pricing scheme another way, you can download the Pokémon Picross demo for free, but the full game costs $30.

With that in mind, I have no qualms about recommending Pokémon Picross for those willing to pay full price. I got a code to download it a few days early, dipped my toes into the microtransactions, then soon decided it was worth purchasing the infinite Picrites with my own money. The only difference between this and Picross DS is the $30 I paid for this came after I already knew I liked it instead of before.

Picross with Pokémon. That’s all this needed to be, and that’s what this appears to be at a glance, but further inspection reveals much more. The murals provide long-term motivation. The missions provide short-term reward. The mega rows encourage nonstandard nonogram logic over rote processes. Aside from the strangely disguised pricing scheme, the new additions to Pokémon Picross exceed expectations.

[This review is based on a retail build of the game essentially purchased by the reviewer.]