Minnesota-based developer Monster Games is no stranger to resurrecting long-dormant franchises for Nintendo.

In 2006 it released the spiritual successor to the NES classic Excitebike, Excite Truck for the Wii. Then, just three years later it veered wildly from the formula with the off-the-wall racer, Excitebots: Trick Racing. Then, in 2009, Excitebike: World Rally — an updated version of the original that started it all — landed on WiiWare.

Now, it’s taking on Pilotwings, 15 years after the release of the Nintendo 64’s Pilotwings 64. Pilotwings Resort isn’t just a return to a sleeping franchise, it’s kicking off an entirely new platform on the Nintendo 3DS. 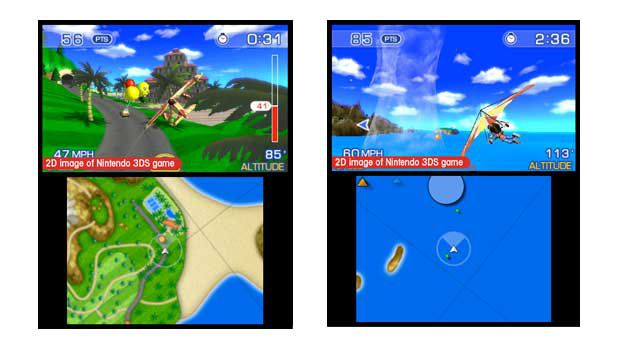 At its most basic, Resort doesn’t deviate much from the Pilotwings formula you’ll remember. It offers up only three flight options: hopping into a cockpit of a plane, strapping on a jet pack, or gliding through the air. This time around, though, you’re taking your Mii for a whirl around Wuhu Island, Nintendo’s fictional isle gamers also visited in Wii Fit and Wii Sports Resort. Basically, if it’s a Nintendo game with a Nintendo Mii, bring your passport, because you’re probably visiting Wuhu Island. In the case of Resort, this actually works to the game’s benefit.

Fortunately, Wuhu Island is a bit more interesting to look at than most Miis. It’s a beautiful, sprawling mass of a rock that features more variation than any real life locale has any right to have. We’re talking everything from a massive bridge to a functional town, a rumbling volcano to an abundance of plant and wild life. Spending most of your time observing the island from a bird’s-eye view, you’ll be surprised at not only how diverse it actually is, but now pleasant it gaze down upon.

The game is broken up into two distinct modes, the meat being the game’s “Mission” mode, a series of aircraft-specific challenges. While you’re thrown a few curveballs from time to time — tossing on a squirrel suit or shooting balloons, for example — for the most part the challenges are simply guiding you through rings or towards objects. Earning enough points to unlock all of the challenges the game has to offer shouldn’t take more than four hours for most players. Perfecting some of those challenges is another story; the soul-crushing difficulty on some of the later events rears its head with little warning. 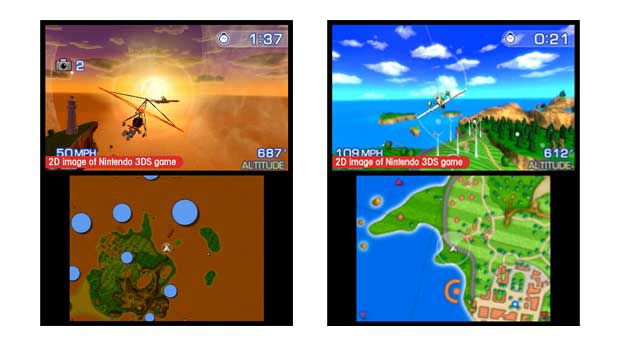 “Free Flight” mode will let you explore Wuhu Island, collecting bits of island information, Mii trophies to unlock in-game dioramas, and more. If you’re into that kind of thing — collecting every little scrap a game has to offer — you’re looking at another few hours of game time here. Be warned that it’s a bit of a frustrating affair. “Free Flight” really means “you’re under a time limit, and different items can be found depending on the time of day, and all of the times of day aren’t unlocked from the start, so have fun with that, buddy.” If you’re looking to take a relaxing, aimless wander around the island, soaking in the sights, you’re out of luck.

Of the small handful of available launch titles, Resort manages to make the best use of the handheld’s glasses-free 3D in terms of actual gameplay. While I personally had to keep the slider on a lower setting to avoid a cross, blurry image, that extra sense of depth did seem to make some activities more enjoyable. In many cases it even made them easier; judging distances for landing on small, floating platforms, was eased with the 3D effects turned on, for instance. 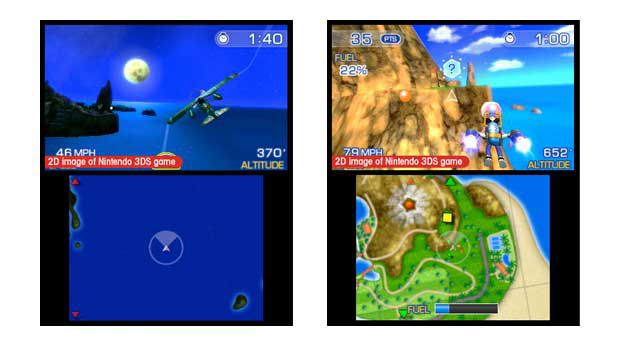 What Monster Games has delivered with Pilotwings Resort is good fun, with satisfying flight controls across all of the game’s vehicles. Even still, it feels a bit empty. Most of the game content can be unlocked in a measly few hours, and the extras are not only trivial, but can get extremely aggravating to unlock.

There’s no doubt that Pilotwings Resort offers a smooth, pleasurable ride and a long overdue return to a beloved series. But when you land, you’ll just wish there was a little more fuel in its tank.