The visual novel has been ubiquitous in Japan since the early ‘90s, but in the West they’ve never truly caught on. Whether it was the U.S.’s love for its own home-grown adventure games like Sierra’s King’s Quest, the SCUMM games by LucasArts, or the absolute pain it is to translate games from Japanese that can be over 450 English pages long, it’s never been clear as to why that is. In fact, it wasn’t really until the early 2000s that they finally started catching on. The Nintendo DS was the platform many English-speaking gamers experienced their first visual novel on, through none other than Phoenix Wright: Ace Attorney. 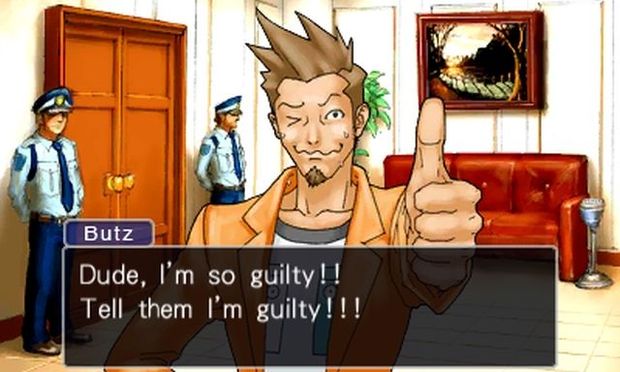 Phoenix Wright: Ace Attorney had the right blend of Japanese humor and adventure aspects to break into the Western market. Hardcore gamers weren’t the only audience to fall in love with Phoenix Wright though. The DS was in part responsible for the now multi-billion-dollar casual gaming industry and the Ace Attorney himself gained fans from all walks of life. The series has only continued to grow in scope and fanbase, and a new sequel is said to be in the works for the Nintendo 3DS.

The English version that debuted the character of Phoenix Wright, which released on the Nintendo DS, is actually a port. The original version of the game was released on the Game Boy Advance and has since been ported to Windows, iOS, Wii, and recently the first three in the original Phoenix Wright Trilogy were ported to Nintendo 3DS. Going into reviewing the 3DS trilogy, I was initially concerned that the series wouldn’t stand the test of time, but I was pleasantly surprised.

The first game is by far the simplest of the series. It follows the titular Ace Attorney Phoenix Wright during his first cases straight out of law school, and focuses on his relationships with his law firm boss’ sister Maya Fey and childhood friend turned rival Miles Edgeworth. The story still holds up solidly throughout the game’s main four cases (and one bonus case), but compared to the later entries in the series, the cases are played in a fairly straightforward manner, with cross-examinations, introduction of evidence, and objections being fairly obvious and non-branching. It’s still an absolute blast to play through, especially if you’ve never experienced it before, but like I felt in 2005, I wish there had been multiple ways to get a verdict. The fifth case is a bit more exotic though, as it’s the bonus case made specifically for the Nintendo DS and as such uses the touch screen and microphone for dusting for prints, or spraying luminol.

The second game, Phoenix Wright: Ace Attorney: Justice For All, is probably my favorite of the three and is where the series really came together to define the formula that would take Ace Attorney from merely good to excellent. The game takes place roughly a year after the first and all the familiar faces return. It offers four cases to solve, involving amnesia, mediums, circuses, kidnappings, and dirty, dirty, murder. It features the best pace and variety of the three games, and the cases don’t go by too fast or too slow, remaining challenging without being frustrating. It introduces the Psyche-Lock system, in which Phoenix can use the correct evidence to “unlock a witness’s heart” and allow questioning that they would otherwise clam up at. Unfortunately though, this game’s cases received none of the DS treatment the bonus mission did in the first game, so after completing it, this game can feel like a step back, even with the addition of Psyche-Locks. 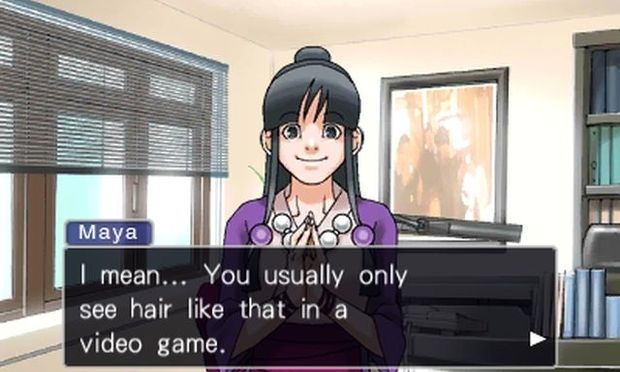 Unfortunately, the finale of the trilogy, Phoenix Wright: Ace Attorney: Trials and Tribulations, is for me the weakest in the series as far as gameplay is concerned, lacking the originality of the first, or the innovation of the second. It feels like more of the same, but that’s not necessarily a bad thing, as the story is still quite strong in its own way. Trials and Tribulations serves as a prequel focusing on Mia Fey, Phoenix’s first boss, and on the events directly after Justice For All. However, this game can be quite frustrating because of its expansion of a concept introduced in the second. At times Phoenix can get an answer so wrong that the Judge instantly gives you a game over. In the second title this was fairly rare, and easy to recover from, but in Trials and Tribulations the frequency has increased quite a bit, and for a game that is at its core fairly linear, making a player repeat 15 or twenty minutes of dialogue is a sure way to get them to turn off their 3DS.

While the games are still excellent, there’s not really anything new added for their 3DS release. These are basically a port of the iOS version, with a simple yet adequate 3D layer tacked on. What you see is what you’ll get. There are no new bonus cases or ways to play — just regular old Phoenix Wright un, deux, and trois. It is somewhat disappointing that these games aren’t a true remaster, but at ten dollars a game, it could be a lot worse. I typically do my handheld gaming on my 3DS, so it’s nice to have a copy of the three games that’s sharp, easy on the eyes, and digital. 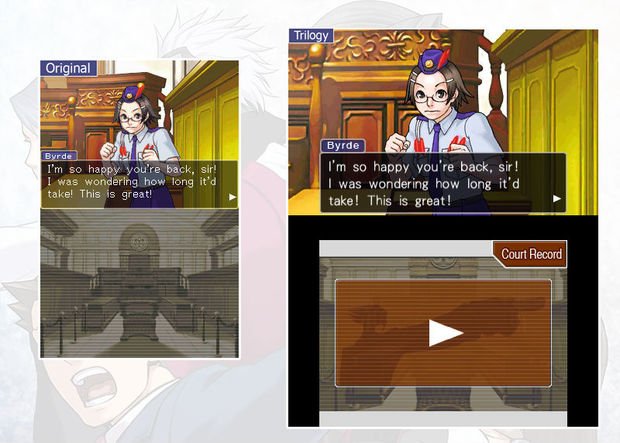 If you’ve never played Phoenix Wright, or if you’ve only played one or two of the original trilogy, this collection is a great way to finally rectify that. However, if you’ve picked them up for the DS, or the Wii, or iOS (or Windows for our Japanese friends), you may want to pass unless you’re looking for a convenient way to experience the games. With no new features aside from the rudimentary 3D, this collection is meant to satisfy those who haven’t come to love the unique and colorful world of Phoenix Wright. If you know someone who hasn’t been so fortuitous, take one of those shiny new gift cards you just got and get them a copy. You’ll be doing them a favor.