‘I’ve got a feeling, somebody’s watching me…’

What is the ‘truth’, these days? As we slip further into niche news outlets, right wing or liberal, the truth is becoming less about the facts and more about the emotional response. Opinions are being published and weaponised on a daily basis, articles are turning into clickbait videos, and forums are in danger of being black and white echo chambers. The web might seem like a mistake for journalism, but it’s also an opportunity for those who know how to exploit those emotions for their own gain.

In response to this, Orwell‘s second season, Ignorance is Strength, attempts to create its own reflective war of information, where surveillance is no longer used to find the facts, just ways to hurt its opponents. But thoughout its politcial thriller ambitions, Orwell never forgets about the victims beyond the black mirror. 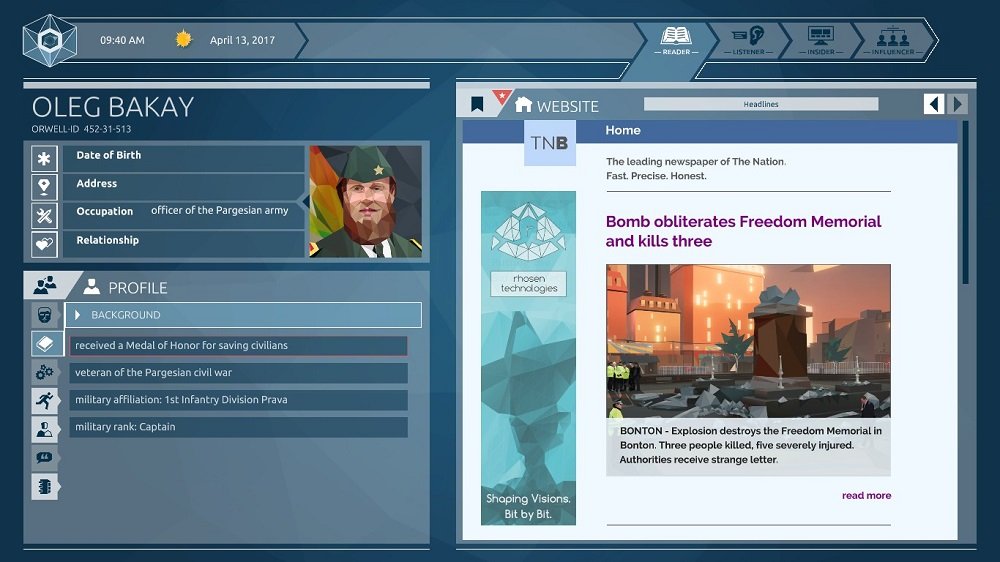 Set during the first season’s events, Ignorance is Strength sees The Nation under a different kind of attack online. A firebrand refugee-turned-blogger, Raban Vhart, threatens to expose an old friend for being a National spy, perhaps even one responsible for a tragic event in their war-torn country of Prages. As a new agent for the Orwell program, an all-seeing-all-knowing government algorithm, it’s up to you and your handler to destroy Raban’s reputation before he reignites another round of civil unrest.

But what starts off as a cut-and-dry political thriller soon turns into something far more personal and malicious. Ignorance is Strength might be reflective of today’s news climate and kneejerk reactions, but it’s still a series about flawed people and the technology that isolates us.

If you’re not familiar with the series, the premise is simple: you need to build a suspect profile for your agency by finding bits of relevant information (“datachunks”) online. These can range from news articles to social media images to personal emails, and it’s not long before you’re listening in on phone calls or hacking into someone’s desktop. If it sounds sinister, it most assuredly is, but that’s part of Orwell‘s murkier charms: there’s always a justified reason delivered with a calming veneer.

Now, you might skim the screenshots or watch the trailer and think Orwell is complex, but the game is incredibly accessible. Datachunks are highlighted in blue, conflicts are in orange, and it’s a simple case of dropping them into the right profile. Of course, data input on its own is incredibly dull, so most tasks are set to narrative deadlines. Every datachunk, useful or not, takes 10 in-game minutes to upload, and sometimes you’re required to find the right clues before someone posts an inflammatory article. 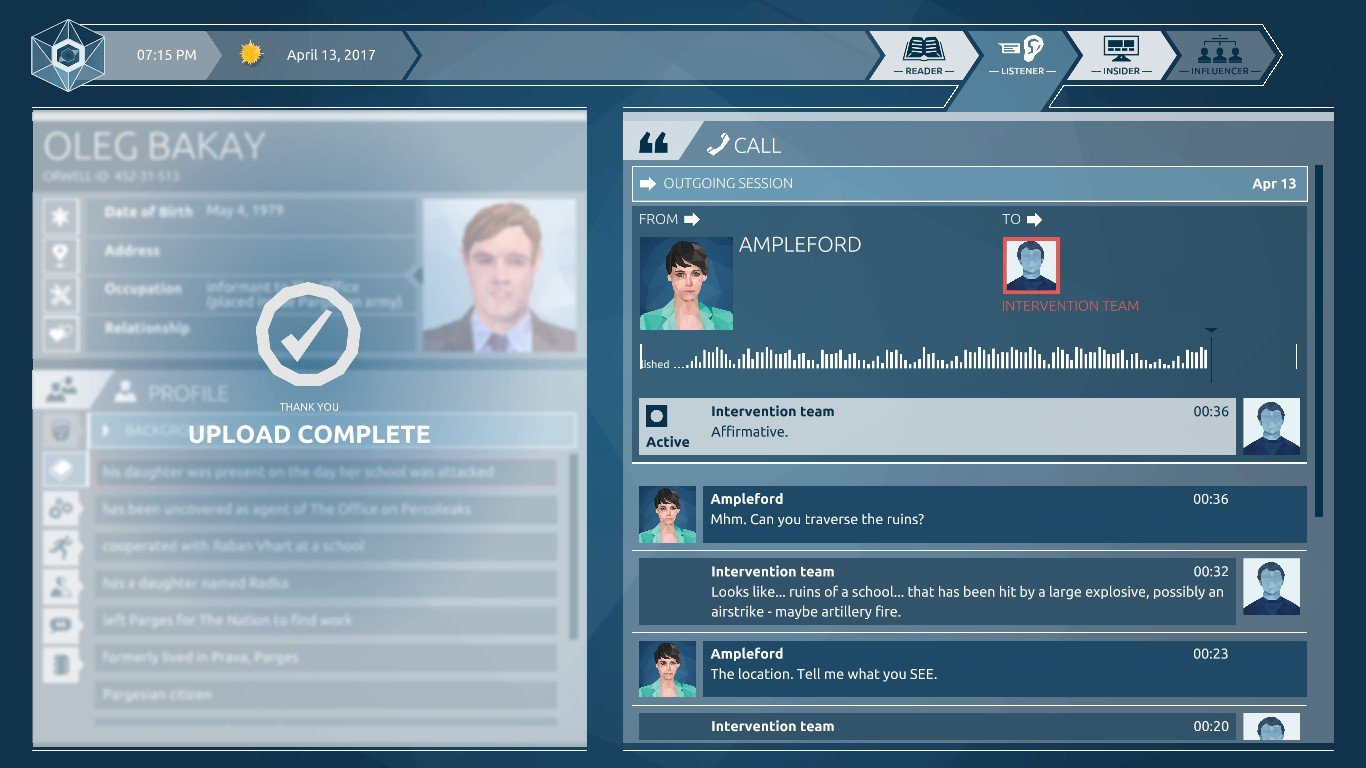 Ignorance is Strength has several branching narratives strewn through each episode, and most lead to unique opportunities. Uploading a certain picture might change your handler’s attitude towards a suspect, while an exchange about someone’s relationship might open up a new avenue of investigation (or exploitation). Some threads are more difficult to follow, while others offer an easy way out. While there’s no ‘game over’ state in Orwell, you’ll always feel under pressure when ‘following the money’, and its narrative choices are not only fluid but surprising, too.

You don’t have to read every line on every document or web page, but it pays to be attentive to every detail and astute with every deduction. Thankfully, Ignorance is Strength does a brilliant job of keeping you invested with excellent writing; subtly reinforcing the connections, fueling your assumptions, and giving you just enough to read between the lines. Its best moments are when you see things the system doesn’t, and much like Orwell itself, Ignorance is Strength thrives on the human element. 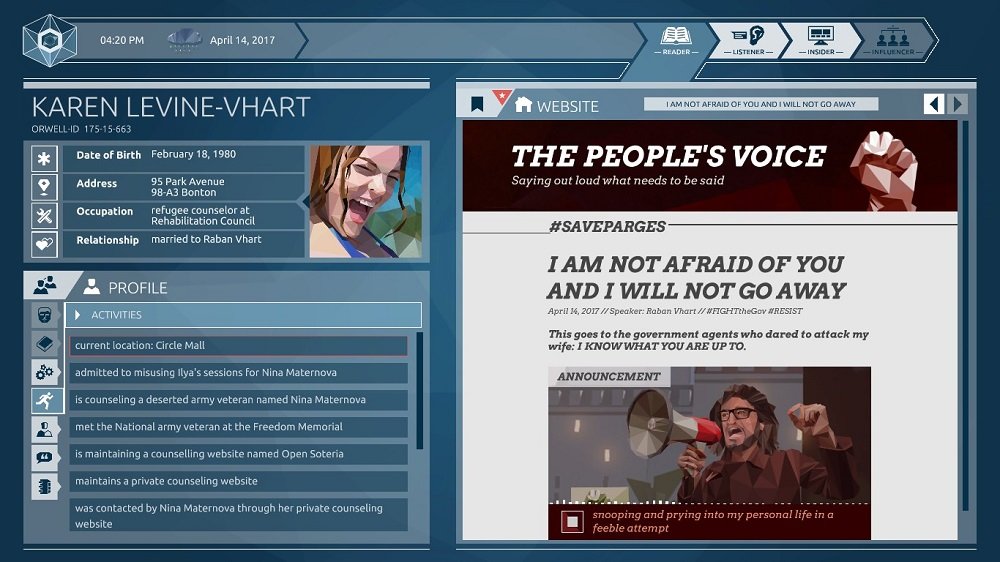 Though the cast is much smaller this time around, they’re still a beautifully realised and tragic group. Everybody has secrets, uploaded a couple of dumb pictures, said some regretful things, took a holiday to somewhere pretty, met people and told their stories, and it’s all somewhere online, ready to be manipulated and misconstrued. Even at your most detached, there’s always something to catch you off guard.

In my experience, it was finding a picture of Raban’s wife on the beach, soaked through and laughing. It ended up being her profile photo; a little reminder that my actions had consequences. Orwell probably doesn’t get enough credit for its artwork. It side-steps the usual cliches of a dystopian society by painting a normal, mundane reflection of the Western world, making your actions all the more ominous as you surf through it. 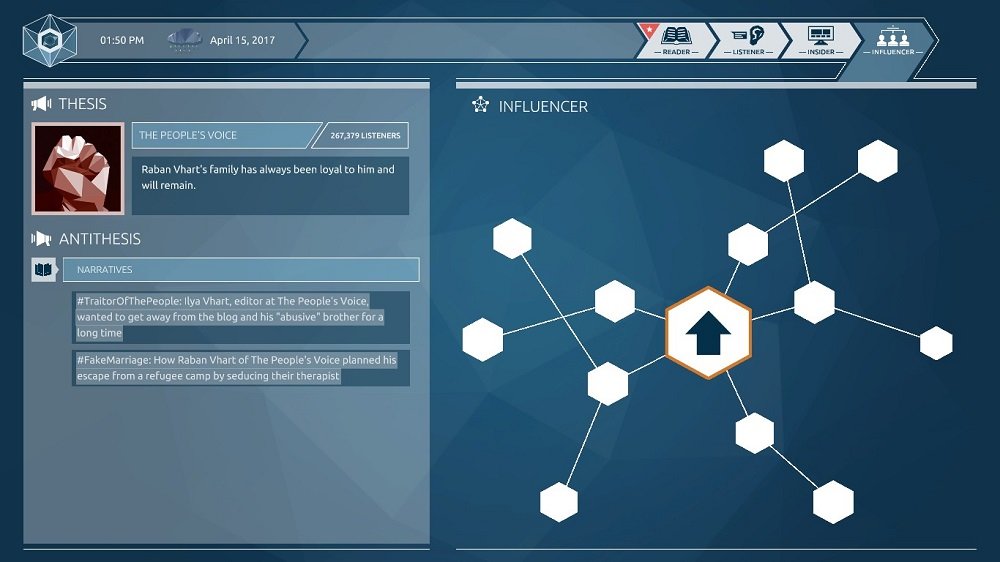 If Ignorance is Strength has any problems, they’re fairly minor. The game does a great job of guiding you through the mechanics and overall goals, but not so much when it comes to the puzzles along the way. Between the eureka moments, some connections are fairly obtuse (most notably during Episode Two), relying on an exhausted option to make progress. Also, the formula remains largely unchanged from Keeping an Eye On You, despite the addition of new tools. The “Influencer,” in particular, is introduced a little late into the game, even if it does come with some of Orwell‘s sharpest observations on social media bots.

Overall, the problems are something you’ll either be used to as a seasoned player or a short hurdle to overcome as a new player (it’s recommended you give Keeping an Eye On You a shot). If there’s a third game, Osmotic Studios will shake up the formula, and going by Ignorance is Strength‘s standards, they’ve certainly got the potential to make it happen. 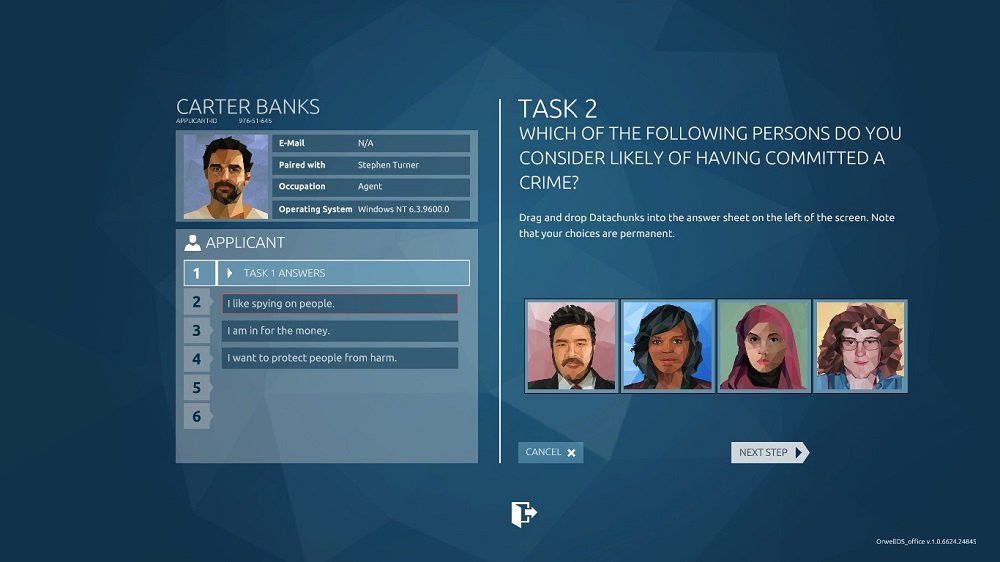 At its heart, Ignorance is Strength is about people. For all the technological paranoia, Orwell has always put humanity at the forefront, whether they rage against the machine or publish holiday memories, or even someone digging into their lives and making cold judgements on selective information.

Two for two, Orwell continues to be an engrossing voyeuristic experience. While Keeping an Eye On You had this belief that ‘the end justified the means’, Ignorance is Strength has a far more venomous bite resulting in a frenzied finale. It cleverly spins a new perspective using the same tools as before, while always reminding you that the system, no matter how cold and callous, is still made up of regular folks like you and me.