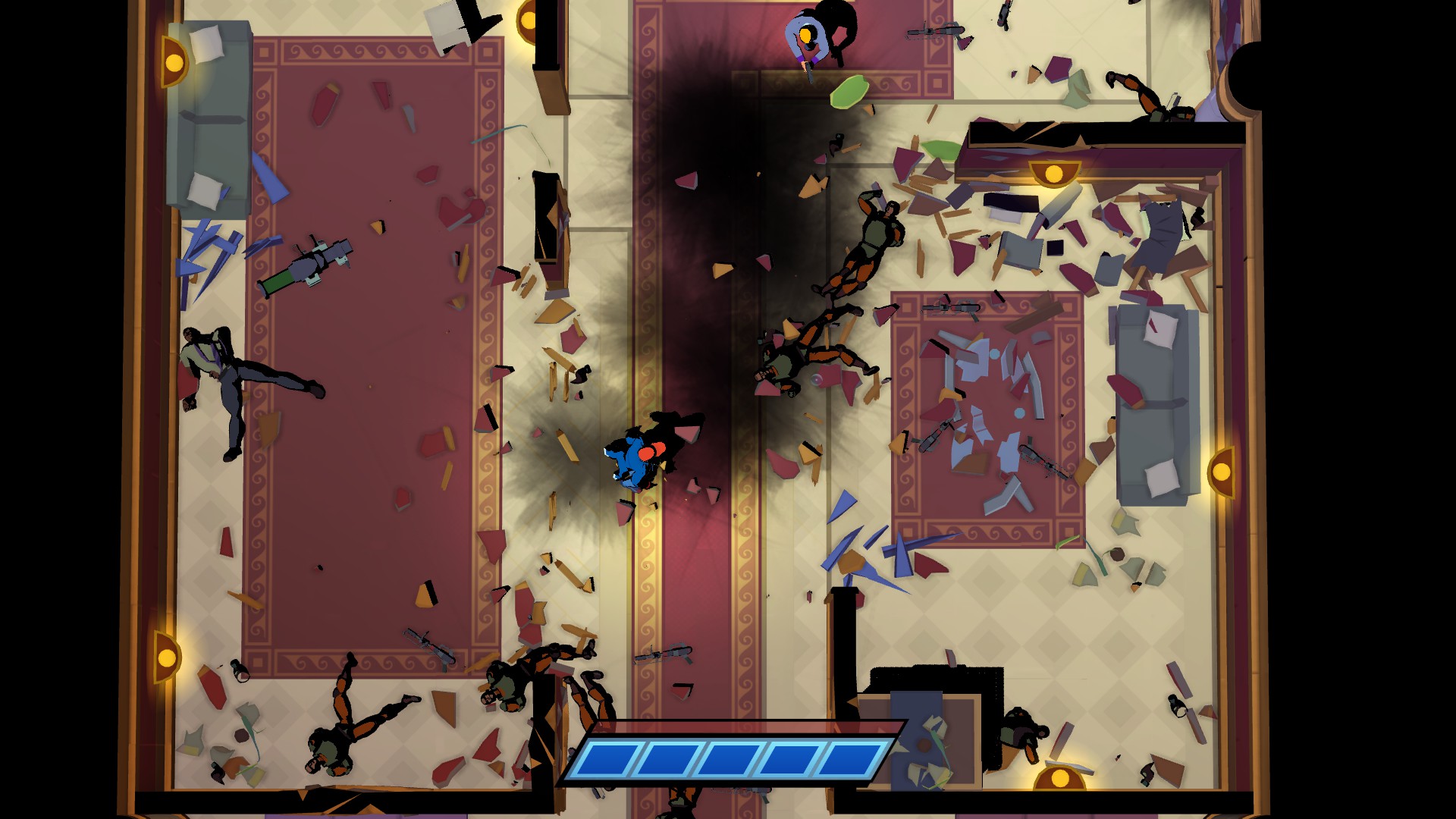 Blink and you’ll miss it

Hotline Miami was an instant hit upon its release in 2012. Mixing a unique style with gratuitous violence and a self-reflective story, the game asked players to question why they were so willing to murder in video games all the time. Was it something to do with a damaged psyche or was it more animalistic?

While the sequel failed to live up to the original, not many other developers have even attempted to tackle the same style of gameplay. We’re definitely seen overhead shooters and brawlers before, but nothing that captures the intense difficulty and careful planning that defined the Hotline Miami experience. Team Shifty has taken notice, though, and is looking to up the ante.

Being sold on the idea that this is Hotline Miami-like, Mr. Shifty basically apes the gameplay from Dennaton Games’ brawler and introduces teleportation. Why, exactly? That doesn’t matter; you’ve got goons to beat up! 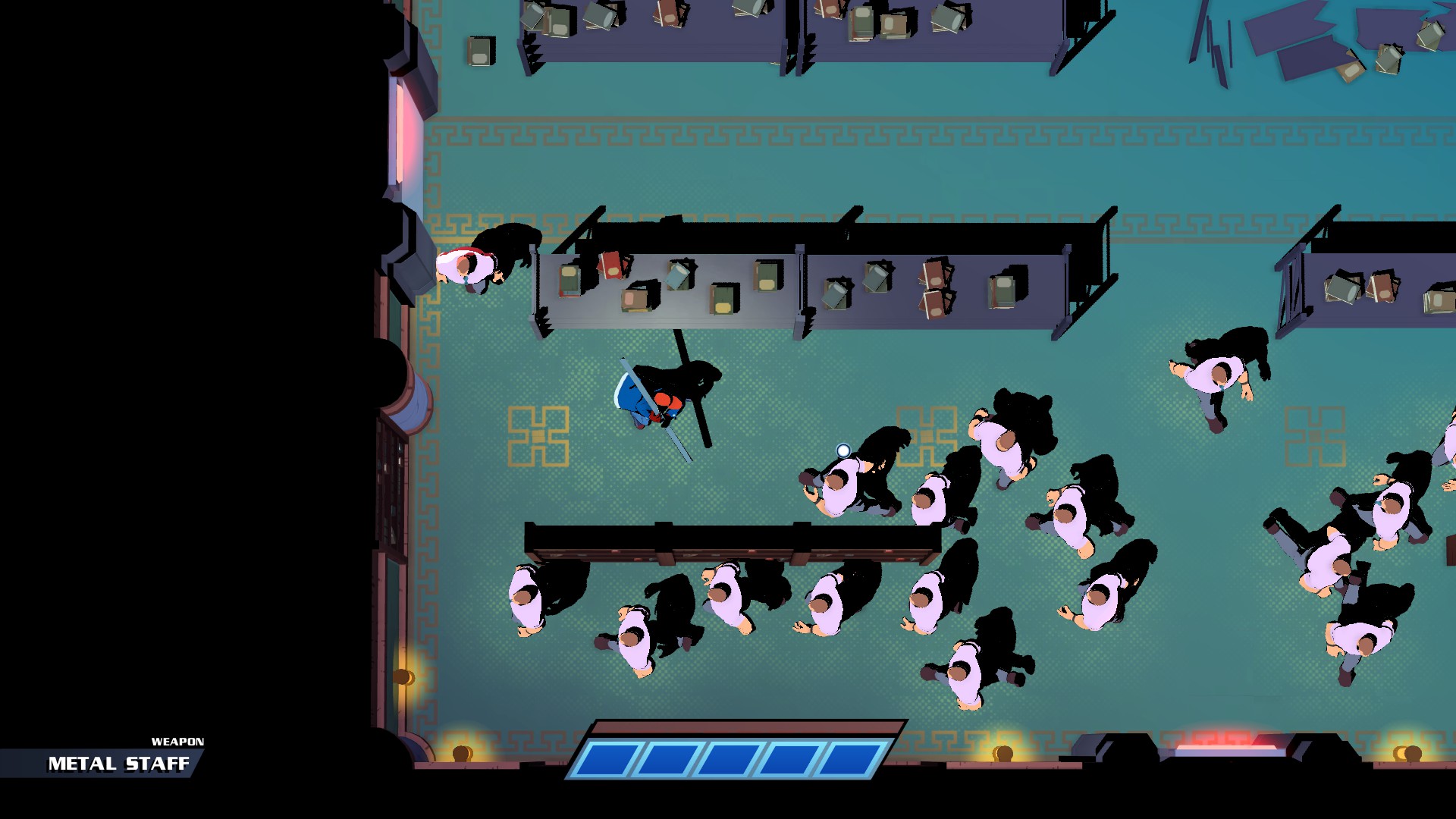 The plot behind Mr. Shifty is that you’re a thief with teleportation abilities breaking into a highly secured tower to steal a plutonium core. The why for this plan isn’t ever revealed; the only information you have is that Shifty is an expert at what he does. Being guided by the hilarious Nyx, Shifty encounters a bunch of armed guards that he easily dispatches with some punches.

Saying the plotline is important would be wrong. Mr. Shifty presents itself in a comical manner and never beats you over the head with philosophical statements about violence. Instead, this is more like the PG-13 version of an X-rated film; people definitely die, but you won’t be seeing dismembered limbs or spurts of blood anywhere.

Your commander, Nyx, basically tells you to kick ass, kick some more ass, and to keep kicking ass when stuff goes wrong. She is no-nonsense and self-assured, cracking jokes about how your plan is “certain death” or how you’re encountering “minimal resistance.” It works to make you chuckle and stop focusing on the absurdity of each challenge.

The bulk of the game is made up of the same kind of combat challenges from Hotline Miami. You enter rooms loaded with guards and need to figure out how to eliminate them without getting killed. You can attack with your fists or pick up weapons to dispatch enemies. One shot (or punch) means death, so you can’t just blitz through an area freely. What does change up the combat is your teleportation ability, which allows you to phase through certain walls or quickly dodge bullets.

Along with that, you can build up a meter that allows you to slow down time. After enough consecutive kills, you’ll be given what amounts to an extra hit point. When a bullet comes close to you, time will slow down and you’ll be able to run away or destroy everyone on screen with quick attacks.

Armed with those techniques, you can be more reckless than in Hotline Miami. The combat takes a tone that is faster-paced and more reaction-based. You don’t need to spend nearly as much time scoping out areas since, if trouble comes barreling towards you, you often can quickly shift through a wall to defend yourself or take a bullet and destroy everyone around you. 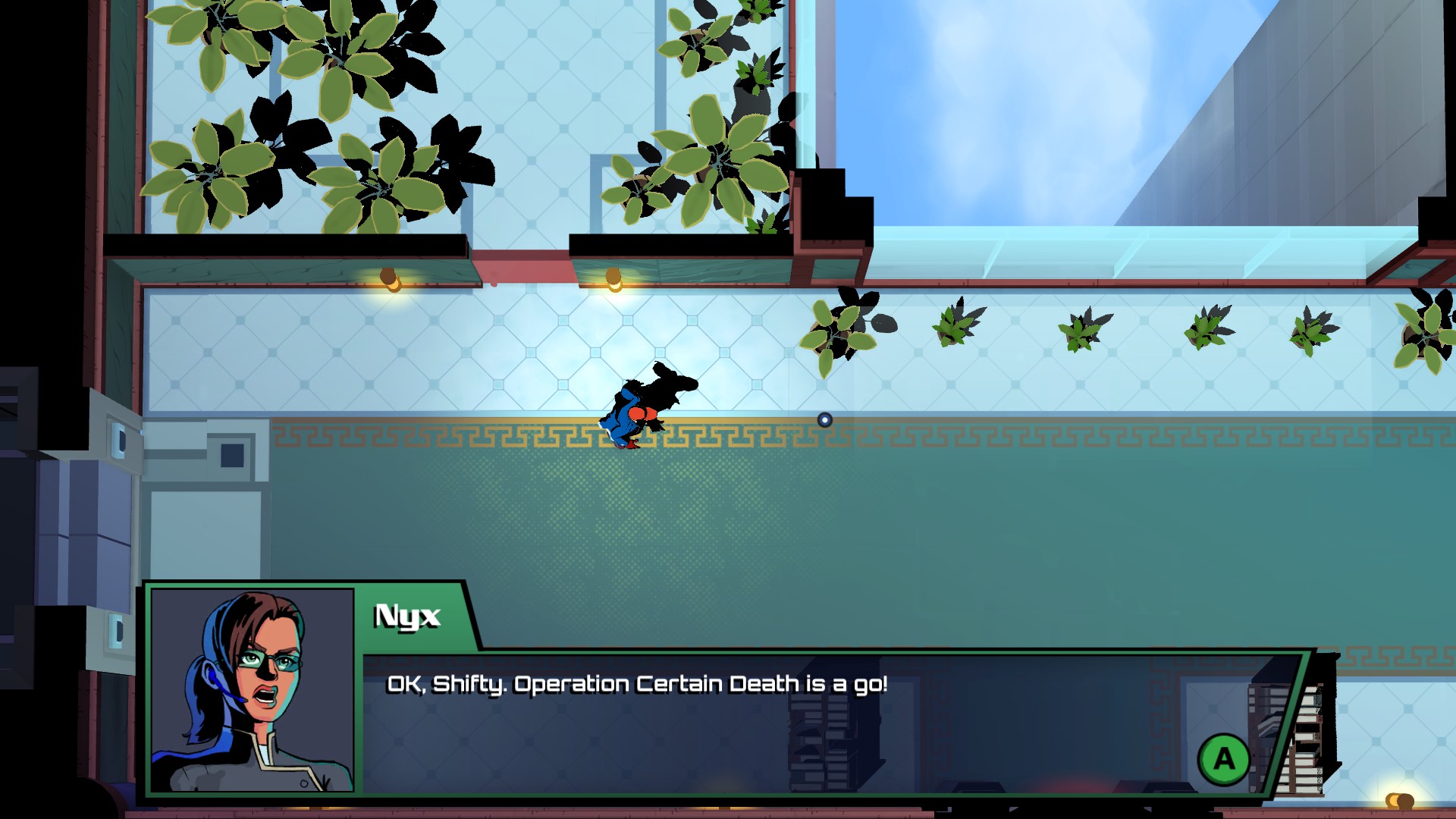 It makes for cool scenarios where you’ll take out a couple of guys, see maybe seven running at you, and then phase away to flank them. There are also moments that are straight out of The Matrix where you’ll dodge a bullet, slowmo around the room, and smack some jerk out a window. The only way this is letdown is how slow the AI is to react to your movements (even without the slowmo). If it weren’t for your single health point, Mr. Shifty would be fairly easy.

Enemies love to funnel through single doors, so you can often take out a dude, phase through a wall, and then just wait for the goons to pour in. This results in the game mostly feeling stress free. The enemies do eventually give way to fools with grenades and that brings about the best change to the formula: destructible environments.

While the AI doesn’t get better (those grenade dudes love to blow themselves up), in later sections, hiding behind walls isn’t a sure thing. Sometimes a guy wielding a rocket launcher will blow open your only defense, meaning enemies will now funnel through the much bigger hole to attack. This near-suicidal dedication to assaulting you can be used to your advantage as enemies are able to kill each other. 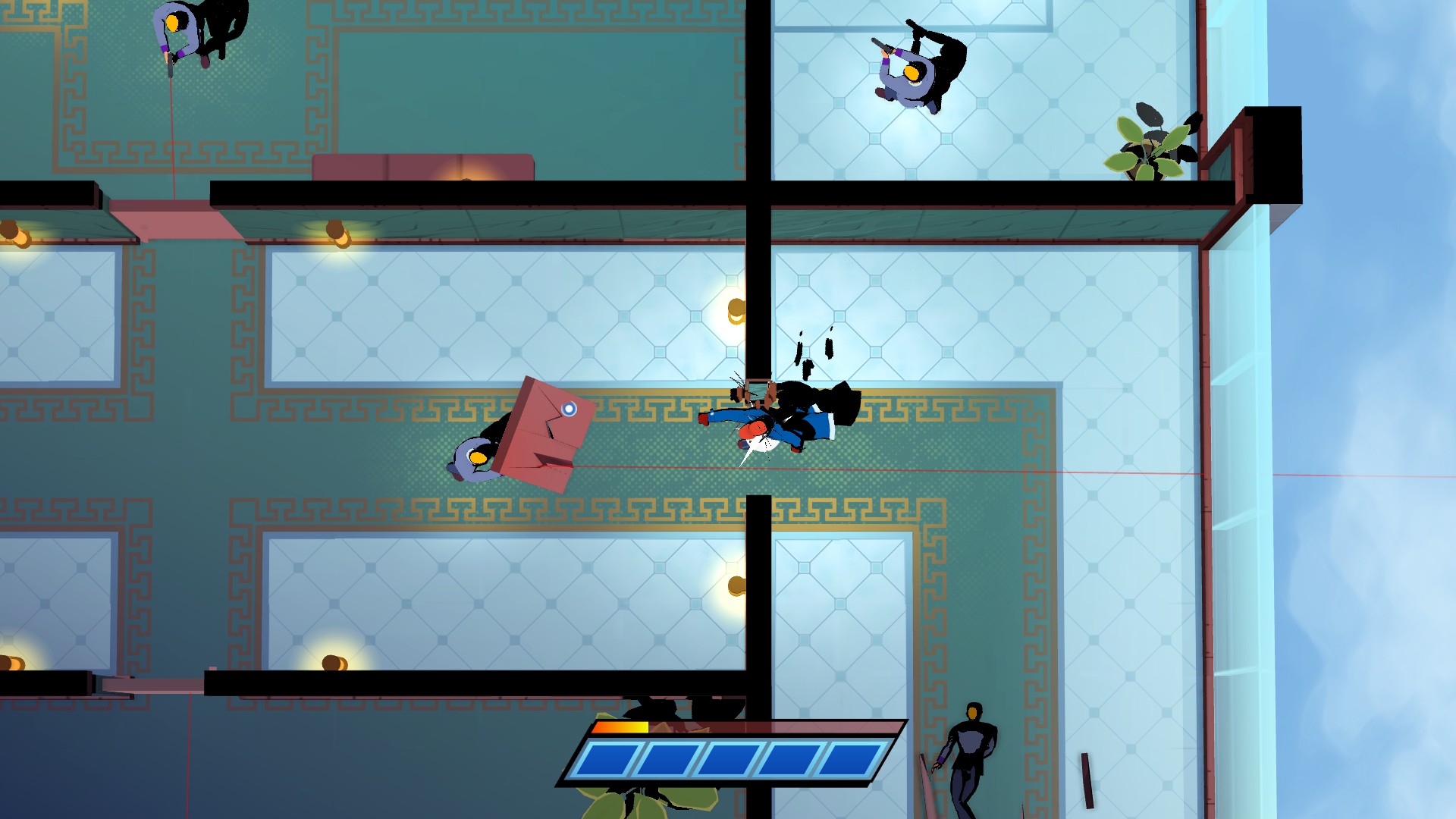 Some of the later “puzzles” even focus on that, surrounding you with heavy brute enemies and a lone guy with a rocket launcher. While you can take out every last person with your fists, clearly tricking the RPG man into blowing up his comrades is the way to go. Rocket turrets also present a similar challenge, albeit without as many extraneous enemies around.

Even with those kinds of scenarios, the combat eventually becomes repetitive. While Mr. Shifty does introduce newer enemy types at a decent pace, the difficulty resorts to simply increasing the number of on-screen foes rather than organically presenting a challenge. You’ll die solely because you failed to react fast enough or there was no reprieve from the onslaught of bad guys.

It doesn’t help that checkpoints are room-based. In the final two levels, you’ll go through a hundred enemies in a single room before you get a chance to relax. While it can make you feel like a badass to conquer such stark opposition, it mostly just feels tedious. You often want battles to end solely so you can move on and get over with it. 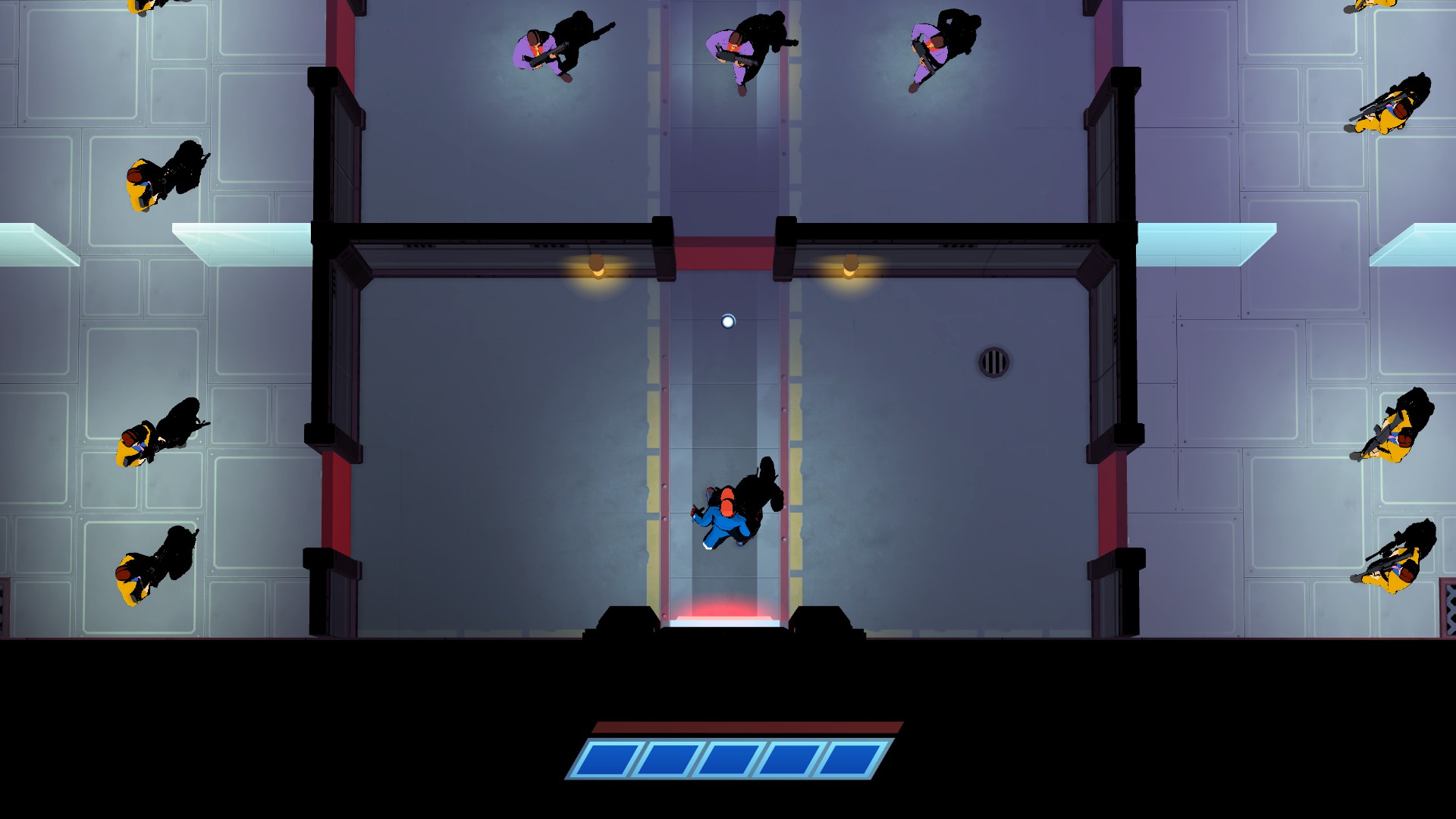 I feel this is exactly the same problem Hotline Miami 2 had: the game is too long. I know four hours isn’t some epic journey or even that long, but it stops presenting unique challenges after 12 levels. Once you reach the end of Act II, you’ve seen all of the tricks Mr. Shifty has to offer. There is even a fake-out ending with the final “boss” that could have worked to perfectly wrap up the whole affair.

Instead, the game throws an additional six levels of goons to go through that culminates in a hilariously easy final encounter. After that, it just ends without much fanfare. Nyx doesn’t chime in to congratulate herself and Shifty doesn’t even say anything. It sucks the wind out of the whole ordeal.

It doesn’t help that the art direction doesn’t change between each area. I suppose you can make the comparison to something like Die Hard with the tower you’re infiltrating, but you’re never looking at a different theme for any level. They all have the same corporate building aesthetic and it drags on. 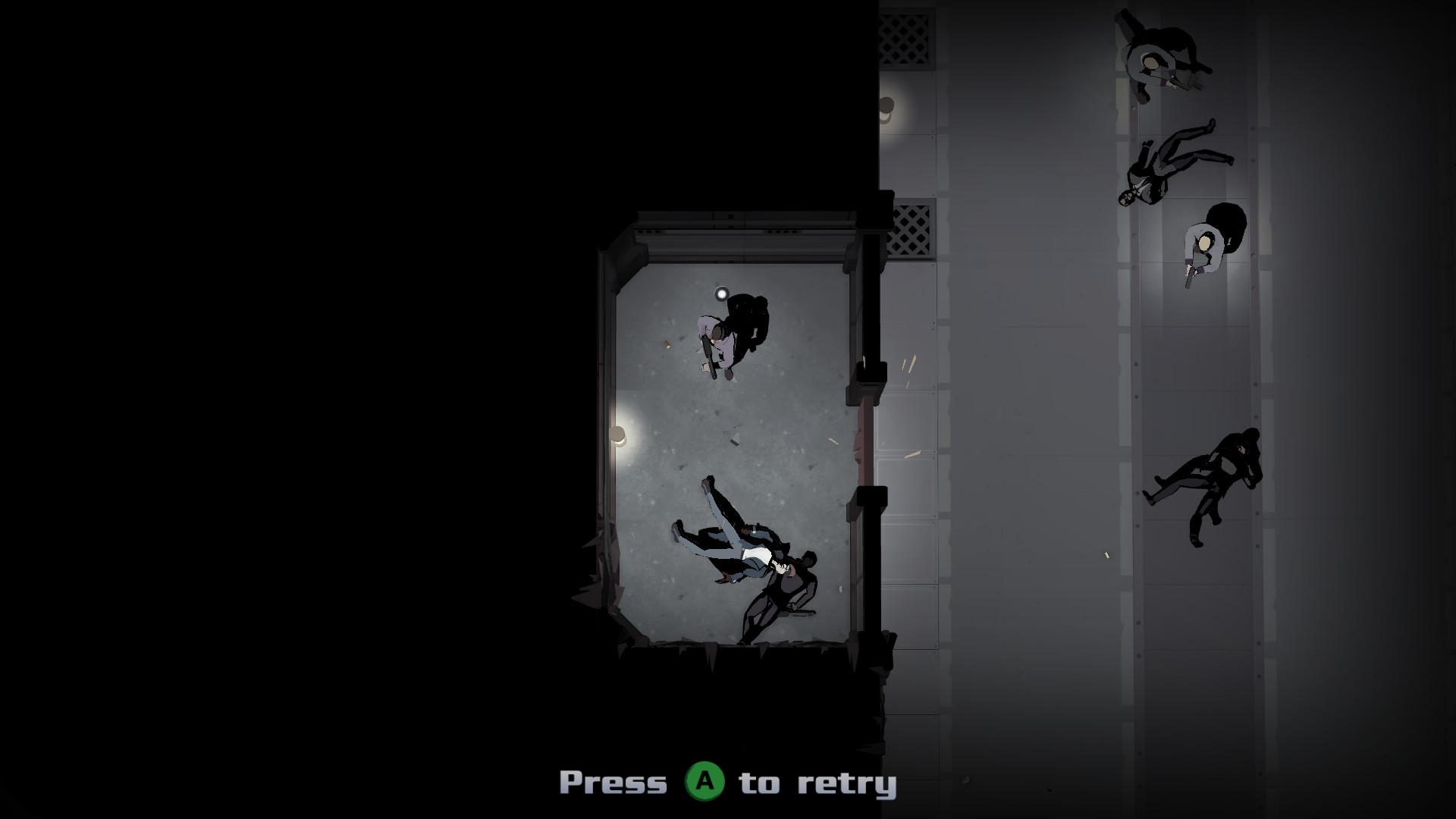 The music is also the same for every level. Hotline Miami punctuated its grotesque displays of carnage with an equally thumping soundtrack. While the savagery was brutal, you often felt compelled to kill because of how primal the soundtrack was. Mr. Shifty sort of sounds like James Bond, but never mixes it up.

There is a pretty neat theme for the bigger encounters and I’m not even saying that the music is bad, but it doesn’t have the variety that helped carry Hotline Miami through similar lulls in its gameplay. Taken on its own merits, it just becomes stale after a while.

That really is the biggest complaint I have with Mr. Shifty: it becomes formulaic. It definitely is fun and I like how creative some of the fights are, but when the cleverness dries up and the theme never changes, it’s hard to stay enthused about the whole affair.

While the combat may have some depth and the game is certainly tongue-in-cheek, it just doesn’t present enough new ideas to sustain itself. I think it’s worth a playthrough, but I don’t believe we’ll be talking about Mr. Shifty for years to come. Just as quickly as Shifty himself enters and leaves a room, so too does this game enter and exit your mind.