Inti Creates is just full of surprises. First, we had the announcement of a brand new Mega Man-like project that absolutely exploded on Kickstarter. Then we got word that Azure Striker Gunvolt was in production, and was an attempt to recreate the feel of the Mega Man X and ZX titles.

Now, we have a full-on 8-bit loveletter to the NES area in the form of Mighty Gunvolt, which is a free add-on for Striker. Provided that Mighty No. 9 delivers, this is going to be one hell of a retro trifecta. 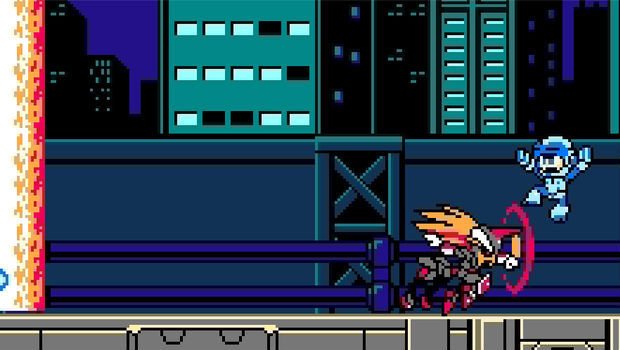 Mighty Gunvolt is an amalgamation of three properties that Inti Creates has worked on — GalGun, Mighty No. 9, and Azure Striker Gunvolt. As such, it has three playable heroes that respectively represent each property, including Angel Ekoro, Beck, and Gunvolt, all of which control differently.

Your mission, if you choose to accept it, is to free occupied cities from evil control. Yep, that’s about all you’re going to get, as there is very little in terms of an actual story or setup. Part of this is likely due to a quick localization in time for Striker‘s release, as was confirmed by the developer themselves.

The look is distinctively 8-bit, which I can’t really get enough of despite the return to the style since Capcom released Mega Man 9. The chiptune soundtrack, the wonderfully crafted sprites — all of it looks great on the 3DS, even if there is no 3D effect whatsoever involved. My favorite part is the cool-looking static screen on the bottom, which shows each character’s controls complete with instruction-book style sprite animations.

Most of the game’s enemies are based off of Azure Striker, but there are a few GalGun inspired sprites peppered in there too, like a loudspeaker that shoots projectiles that look like the word “Love.” It’s little details like these that make the game feel like a cute homage to games like Mighty Final Fight, or other chibi style spinoffs. There are also some direct levels and concepts from Azure Striker, so it even feels like a straight demake at times.

One of the funniest parts of Mighty is how much Beck straight-up looks like Mega Man — he even has a near-identical jumping animation. Instead of a slide he commands a downwards dash type move (that goes under crevices), and his Mega Buster single-shot feels similar. Where he differs mostly is in his lack of a charged shot, which instead triggers an air-dash or regular dash. It’s a nice sneak peek at how Beck will play in Mighty No. 9, and a great homage to the Blue Bomber.

Gunvolt has command of a double jump, a regular shot, and a charge move that arcs a lighting beam wherever you command it. Think of the Beam power from Kirby and you’ll have an idea of how it works. Ekoro is a bit more interesting than either character, as she can float like Peach from Mario 2, shoot arrows, and use a real charged shot that can charm enemies to work on your side for a short while. All three have their own strengths and weaknesses and are worth beating the game with. 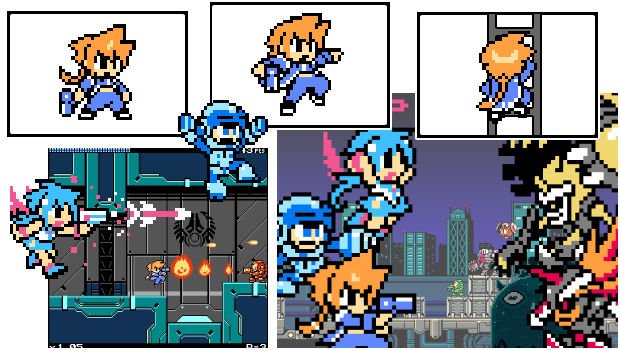 Unfortunately, the bad part is it’s over very quickly. Counting mistakes and acclimating myself to the controls, it took me about 45 minutes to clear all five stages. There are also no real extras or secrets to speak of, so each character is basically going to get the same exact set of levels, albeit in a different order. It’s also very basic stuff mechanically, as “jump and shoot” will get you through most situations unscathed, and the levels don’t lend themselves very well to the idea of secret areas.

As a standalone game, Mighty Gunvolt would feel a tad unfinished. Although all three characters are compelling enough to star in their own platformer, the distinct lack of worlds and exposition won’t keep you invested very long. But as a free extra for Azure Striker Gunvolt, Mighty is a great gift to fans, and an even greater teaser to hold people over for what’s to come in Mighty No. 9.