Next Level Games is in a good spot. Since 2014, it has just been working with Nintendo even though it’s technically an independent developer. Despite having a history with low-key ports, it hit the big-time with 2009’s Punch Out!!, as well as Luigi’s Mansion: Dark Moon.

I’m not sure what’s next after Metroid Prime: Federation Force, but I hope the studio can regain some of that magic. 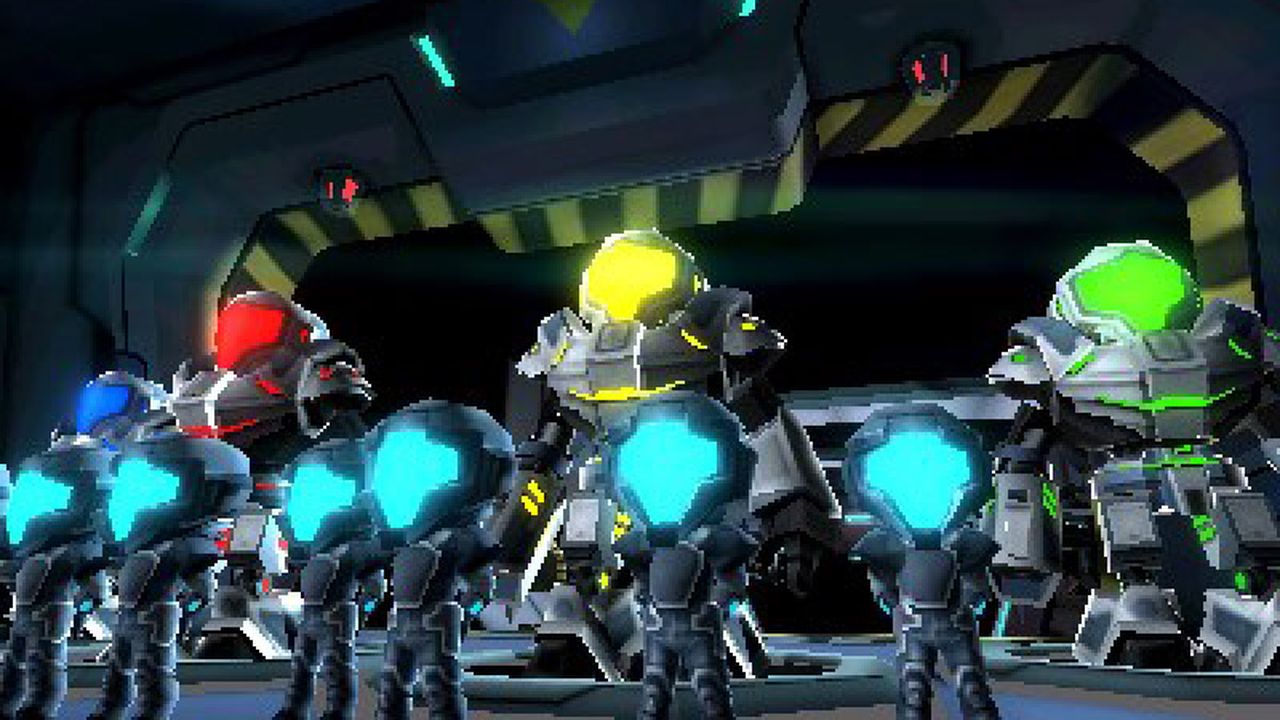 Aegis, Excelcion, Bermuda system. These are all phrases Federation Force throws at you in the first several minutes. They might mean something to the most stalwart of Metroid fans, but to everyone else, it’s white noise. That diarrhea of terms sums up the entire plot, and thus, the justification of this spinoff in a nutshell. It’s a fun popcorn co-op romp, and not much else.

Federation seems to be canon, taking place between the first two Metroid games, just like the Prime series proper. Phazon has been destroyed, and the “good guys” are making a move to eradicate Space Pirates. That’s where you come in as a plucky marine from the Galactic Federation, in an adventure spanning three planets with roughly 10 missions each. It all plays out like a Monster Hunter lite. In fact I’d recommend it to be people who feel overwhelmed by that series, because it’s much easier to get into and lacks a lot of the grinding elements.

Throughout my time with it, I really felt it was clear that Next Level Games does care about the source material. There’s familiar enemies that accompany some new ones that fit the universe perfectly; shooting blue doors to open them feels like a nostalgic endeavor; and firing off missiles and super missiles just feels right. Even the new “squad” elements like healing friends with medic drops don’t feel too far removed, and the idea of kitting out different players to perform dynamic roles works as it should. Hell, I even like the chibi heads and quad-colored suits. It feels a little muted compared to the great Alien-esque, terrifying atmosphere of the real Prime games, but as a spinoff, it’s fine. Plus, the sound design (especially with headphones) can be surprisingly haunting in spite of its soft veneer.

My issue lies in its inability to remain gripping throughout as an action game, which is partially to blame on the lack of balance for solo play. Maps feel large, but limited, and have very little in the way of secrets or hidden zones off the beaten path. Sure it has online capabilities (as well as local options, sadly sans download play for the campaign) to help ease that pain, but finding people to sortie with months down the line is likely going to be tough.

Its biggest problem? The three planets are different enough (ice, desert, and gas), but the missions within aren’t. In a typical Metroid game you’re bounding through zones at a rapid pace, weaving in and out of a world that feels connected, even if it’s technically comprised of segmented themed areas. But in Federation Force, the level-based setup and world map don’t really do it any favors, and expose its one-note nature. It would have been better to see more meaningful missions spread across more locations — because as it stands, a lot of the replay value is intrinsically linked to a score-attack gimmick that I don’t have much of an incentive to go for.

The controls also take some getting used to, mostly because they have to conform to the limitations of the 3DS. There’s gyro or nubbin’ (read: right stick) aiming, along with a lock-on feature and a quick “jet boost” strafe mechanic. The nubbin’ can induce a mighty feeling of cramping when you’re shooting off volleys of rapid shots, and ironically, I also don’t prefer using the gyro function when I’m lying down playing 3DS games — quite the conundrum! It’s a personal thing, so grab your 3DS, move the nubbin’ (or Circle Pad Pro) like you’re aiming, then press the R button around 100 times to see how you feel. It’s doable (I love the touch of having L as the jump and strafe button, and how everything is accessible with your fingertips on top), but not over long periods of time.

Although I wouldn’t really say the ho-hum experience is “saved by the Blast Ball” (I really just wanted to use that line), it’s certainly helped by it. As a three-on-three affair, this Rocket League-like event is a thing of beauty, serving as both a minigame and a tutorial for the core questline. They took something that’s usually a drag and made it an entire mode, and did it with gusto, with download play, to boot. Oh, and there’s even a concession for all you Blast Ball demo players — you can transfer all your data over in the full version.

I was holding out hope for Metroid Prime: Federation Force, but at this point, there are so many other dungeon crawlers that are worth your time. Just like Hunters on the original DS, the main questline of Federation will probably fade out of the limelight over time and become a whisper in hardcore Metroid crowds — though I can see Blast Ball having longer legs.