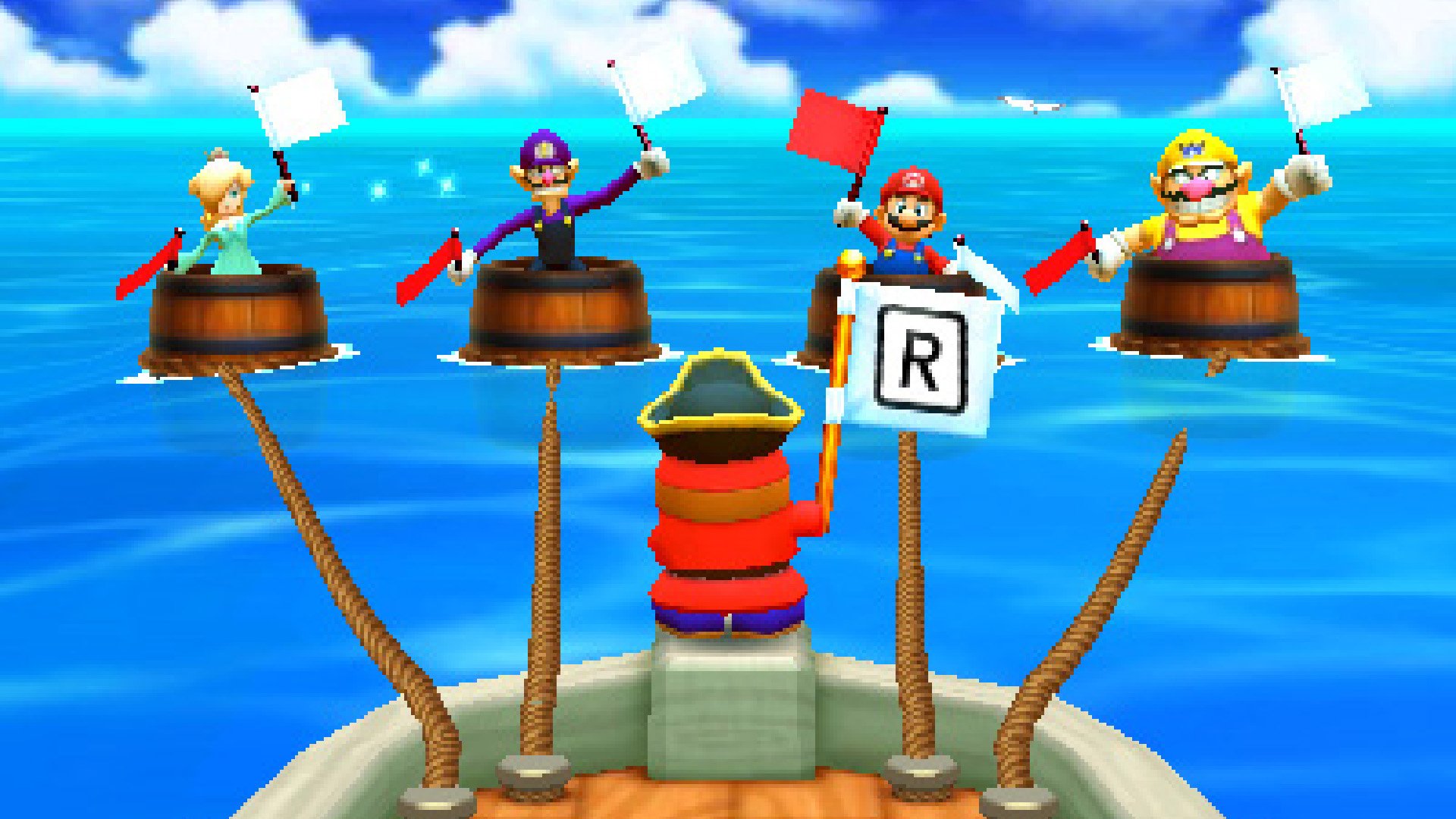 Another day, another attempt at Mario Party

It seems as though the best of the Mario Party games are far, far behind us. The most recent installments have come out to lackluster reception, and are getting even fewer and far between as of late.

Nintendo takes a stab at recreating the original fun of the series through Mario Party: The Top 100, an “all-star collection” of the top mini games from throughout Mario Party history. Bringing folks back to the roots of what made Mario Party a hit in the first place with its classic, manic mini games is a hopeful attempt at injecting some life into the series. 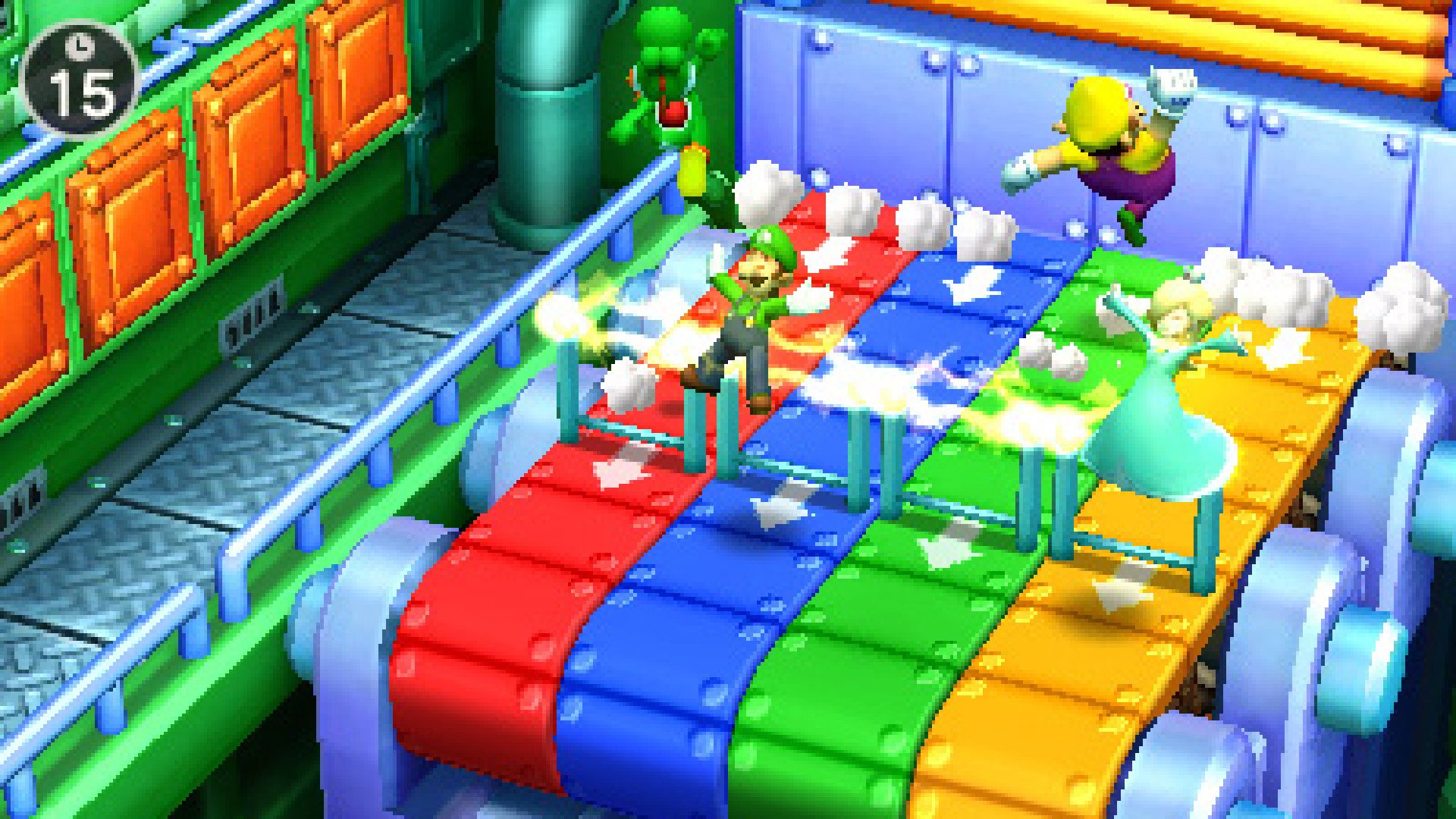 Mario Party: The Top 100 is equipped with four different game modes in addition to a free play mode, all of which can all be played with AI or with friends via Download Play. About half of the mini games already come unlocked, but the remaining ones need a little elbow grease before being playable. Unlocking these games are done via the single player “Minigame Island” mode, where you progress through each mini game on a fairly linear board. It’s a straightforward progression wrapped in the thinnest plotline imaginable, even for Mario Party standards.

The other main mode, “Minigame Match,” is really the only true Mario Party-style game where you and your opponents play on a small game board collecting “star balloons”, taking turns concurrently. Instead of defaulting to an automatic mini game at the end of each round, the games are only played when a player collects a “mini game balloon.” Out of a 10 turn game, about only half of the turns end up with a mini game, making this mode virtually useless if the goal is to play games (which, I am guessing, is the point of Mario Party: The Top 100). 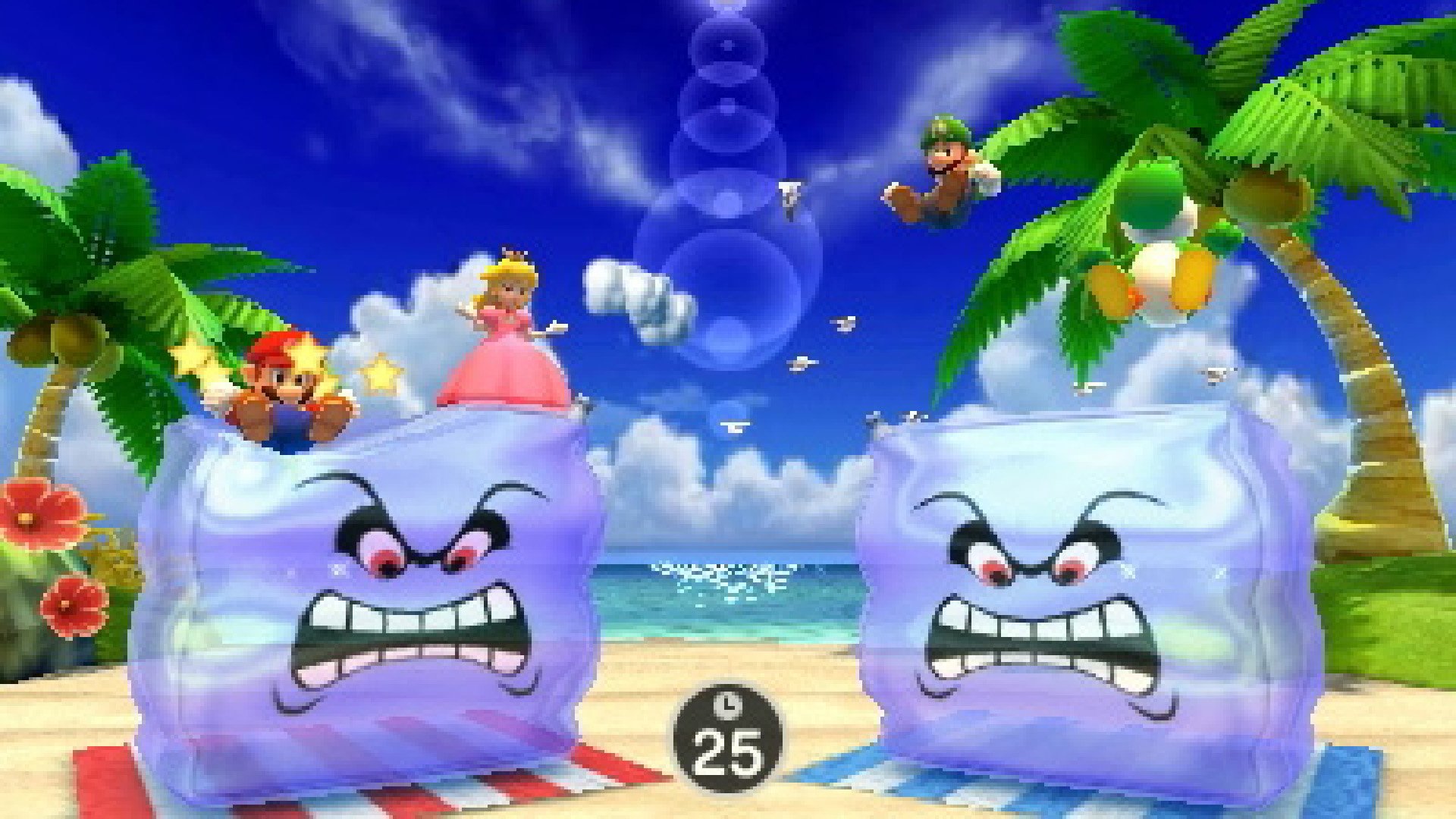 There are two other multiplayer modes that eliminate the fuss of a main game, trending towards traditional mini-game battling — “Championship Battles” and “Decathlon.” Championship Battles is a straight up best of 3 or 5 minigame mode, whereas Decathlon takes things a little farther and assigns points to each player based on how well they did in each mini game (swapping 1st, 2nd, 3rd etc placement for pure skill). This is a really promising mode, especially for players who enjoy the competition of mashing or timing skill, but it can get stale given there are only 5 or 10 preset games to be played.

The Top 100 does introduce one new mechanic that I really enjoyed, which is the ability for each player to choose their “minigame pack” type at the beginning of a multiplayer mode. For example, players can choose a genre like racing, brainy, or luck-based games, or choose from an era like N64 or GameCube packs. These come up during the minigame selection process and allow for the games to be a bit more personalized to the player’s tastes, even if they are randomized. 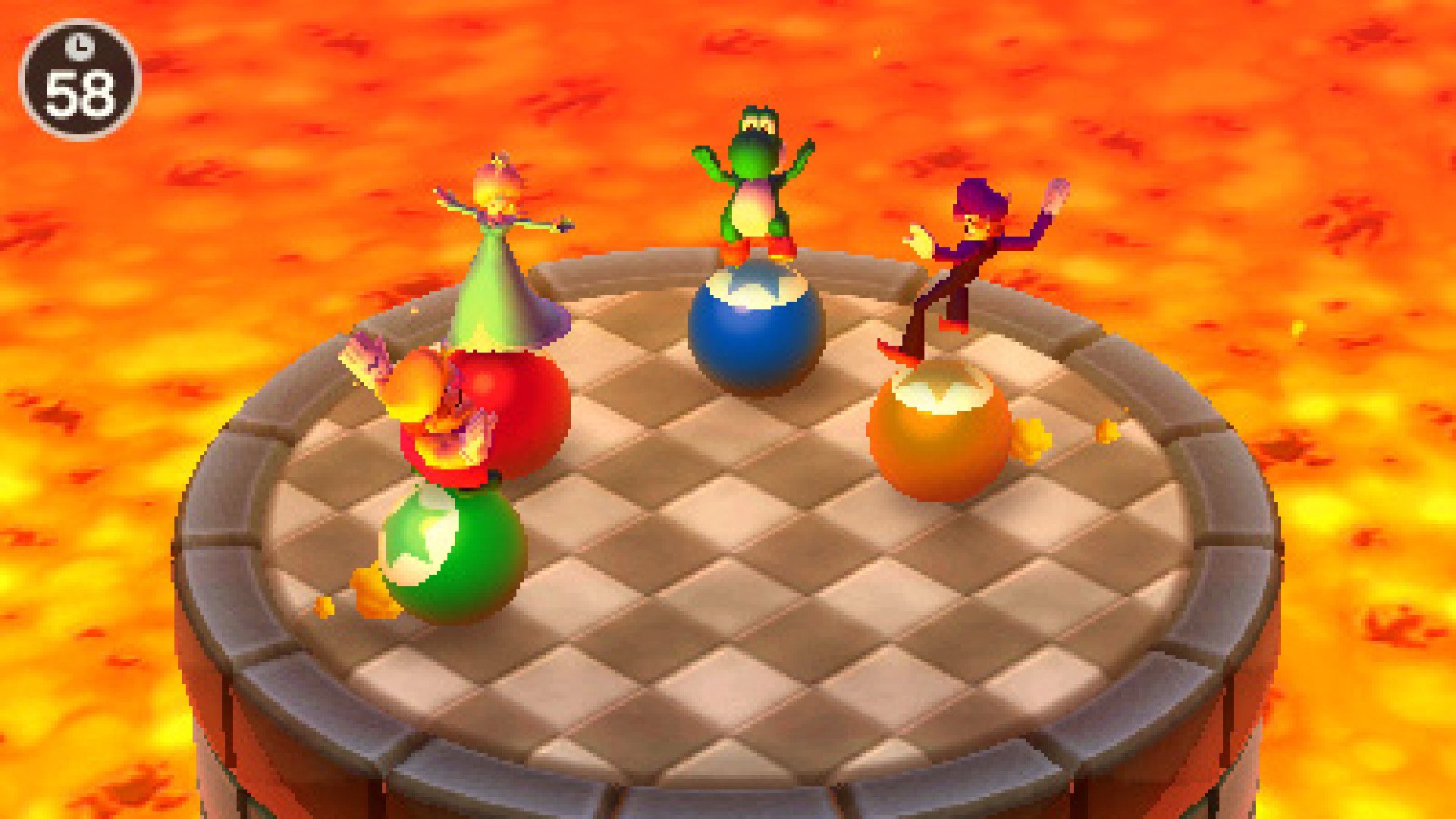 The peak of The Top 100 lies in the fact that they did a fairly decent job representing the most popular and fun games from the Mario Party series. The most fun I had playing this game was rooting through some of the older classics to play via Download Play with some friends, like “Bumper Balls,” “Tug o’ War,” and “Slot Car Derby.” It’s no surprise that all of the mini games come from the core console Mario Party games; nothing from the previous handheld versions are present here.

Most of the older mini games got a little facelift as well — the controls feel tighter, more balanced, and a lot easier to maneuver which ultimately changes the nature of the games as a result. For example mechanics like “Bombs Away” where jumping off of your opponents used to skyrocket your character into the ocean, have now been adjusted to a gentle hop. Although it’s much more balanced than before, it feels off, especially for those of us who are used to the old controls. Some updates are for the better, like adapting the touch screen controls to classic mini games like “Face Lift” so players don’t have to use the directionals for fine-tuned details. 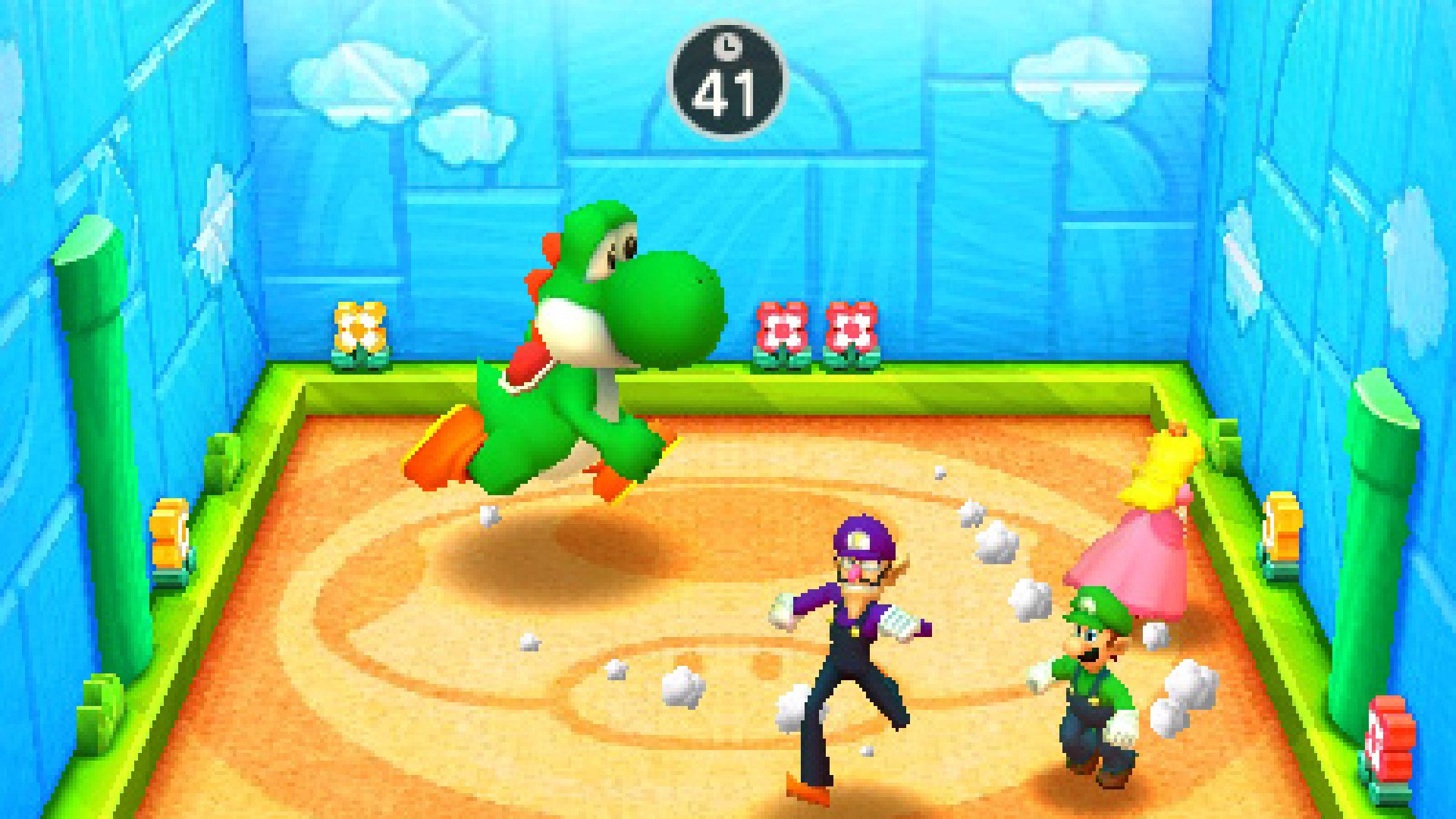 Playing through Mario Party: The Top 100 was a solid trip down nostalgia road, but there was a huge lack of depth to the modes that left me wanting to play my favorite standalone Mario Party games instead of experiencing all of my favorites mini games in one place. The appeal of being able to play my favorite mini game on a whim was quickly overshadowed by the lack of imagination in the rest of the game.

At the end of the day, it takes more than fun mini games to make a good Mario Party game. It’s also about carefully crafting a meaningful game experience that allows you to screw over your friends in the most skilled, fair way possible (with a dash of luck, obvs). Hopefully Nintendo can keep the series alive and perfect the spirit of Mario Party for the Switch, but for now I think Mario Party games are officially dead for the 3DS.