The best-laid plans of mice and men often go awry

On paper, Left Alive sounds like a fantastic video game. With beautiful key art from Yoji Shinkawa on display, as well as a director who helped produce the Armored Core series at the helm, all while being a stealth-action game set within the Front Mission universe.

Stealth! Wanzers! Great art direction! How can you mess that up!? Well, as it turns out, Left Alive is just another example that things can still go terribly wrong regardless of how many cool concepts or people you have working on them. 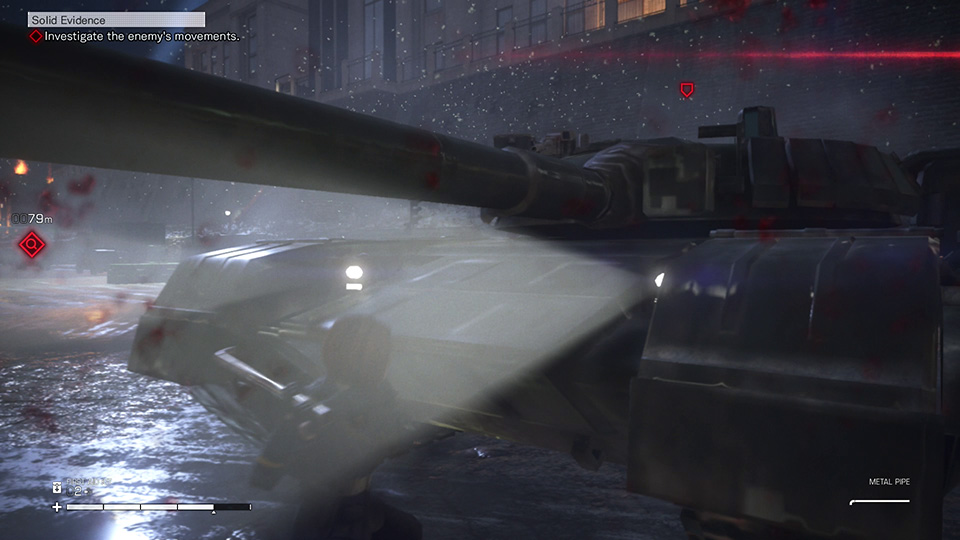 Left Alive starts out promising. As mentioned, the story is set within the Front Mission universe in a conflict between two fictional countries (Ruthenia and Garmonia), that are broken up between three different characters and perspectives across 14 chapters. The story in Left Alive is a tale of attempting to escape a war-torn city, government conspiracies, and revenge.

You’re first introduced to Mikhail, a wanzer pilot who’s left to fend for himself after his wanzer and friends are put out of commission. Following that, you’re introduced to Olga, a police captain in the Nova Slava City Police, who was formally a Garmonian soldier (the bad dudes of this universe) before the city of Nova Slava became part of Ruthenia. Then you have Leonid, which to sum up without major spoilers is a former rebel leader who’s been framed for murder.

Voice acting ranges from decent to sounding like they gave up after a single take and just rolled with it. The art direction is on point, which isn’t surprising given Yoji Shinkawa’s involvement. Hell, they made sure to even include “KOJIMA PRODUCTIONS” right next to his name at the bottom of the main menu. From some slick UI and menus, character designs, and the wanzers themselves — Left Alive does have some decent art direction going for it, with a properly tense and solid soundtrack as well. Overall, though, it’s far from being a good looking game. At times, Left Alive genuinely looked like a game you’d see on the PlayStation 3.

The textures across the board are downright terrible, environments (although open-ended and large), are drab and with nothing of too much interest to see, with anti-aliasing nowhere to be found. It wouldn’t surprise me if this game began development as a Vita title.

Character animations are also laughably bad. As an example: each and every time you kill a guard, their bodies immediately rag doll while their weapons just go straight up into the air. It’s unironically maybe my favorite thing about Left Alive. The presentation all around is just terrible, to go along with the previously mentioned bad voice acting, character interactions sometimes include dialogue prompts you can choose — yet your character doesn’t say squat once you’ve selected one.

To make things even stranger, the characters you’re speaking with will all respond accordingly (and fully voice acted) to your specific dialogue prompts, despite your character being voice acted in plenty of other dialogue-heavy scenes. It just comes off as awkward and lazy. Many of the various characters you’ll encounter also offer side missions as well, from escorting them to a shelter or finding specific items within the environment. Doing them, however, yields little in the way of rewards and will simply burn up precious resources like ammunition — which you’ll absolutely need because Left Alive will throw you into combat in every chapter.

Yes, despite this seemingly being a stealth-focused game, each chapter will have numerous sections that will require you to engage in combat and it’s absolutely awful. Weapons feel stiff to control and use and ammo most of the time is scarce, forcing you to rely on crafted items such as molotovs, bombs, and so on. Regardless, enemies still soak up tons of damage — even on the easiest difficulty settings. Thankfully, their AI is as dumb as bricks…most of the time.

Other times, they’ll spot and begin shooting at you from insane distances. Sometimes, it’s even questionable, as I’ve had moments where I’ve been detected by wanzers between buildings, resulting in numerous soldiers appearing and gunning me down in a matter of seconds. The difficulty early on in Left Alive is downright punishing, (even on the easiest setting). Thankfully, later chapters do become simpler once you’re carrying around a decent selection of weapons.

On that note there’s little in the way of quiet options for dealing with enemies outside of simply avoiding them. Unlike in games such as Metal Gear Solid that has you utilizing CQC or a variety of stealthy weapons, Left Alive requires you to locate and wield melee weapons such as pipes, shovels, and sledgehammers. Unfortunately, they’re hardly a stealthy option because it takes numerous hits to down an enemy with them. So, in most cases, if I needed to get past a group of enemies without detection, I’d simply keep chucking molotovs at them (while behind something) until they burned to death.

Combine this with the fact that Left Alive also has very few checkpoints and manual saving locations and you’ll quickly become infuriated like I was after losing upwards of 20 minutes of progress thanks to cheap deaths or bullshit AI. It’s one of the main reasons why I took so long to even finish my review for this game, as I was constantly stuck in the loop of making and losing progress, ultimately resulting in me losing my patience and playing something better (Devil May Cry 5). 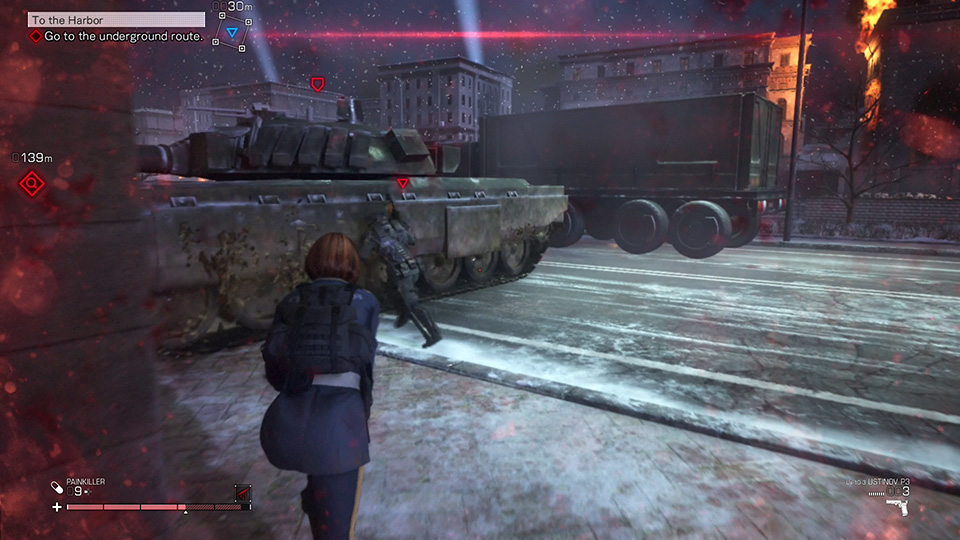 There is some relief to be had in the form of getting to rain death down on your enemies in a wanzer, but these sections are few and far between. During my second time piloting a wanzer, the whole section lasted a couple of minutes and involved basically going down a street and dealing with a few enemy wanzers. Shortly after, I hit a dead end and I was thrown right back into the clunky stealth-action gameplay for another couple of hours.

Left Alive has its rare moments. There are some tense sections of sneaking to be had that scratched that Metal Gear itch I long for, but even those were ruined by your AI companion spouting “caution: the enemy approaching” every single time an enemy is nearby (which as you can imagine, gets old quick). Left Alive even has some nice ideas (like being able to see a heat map of sorts where other players have died), but that’s honestly about it.

The only way I could ever recommend Left Alive to anyone is at a steeply discounted price or for those of you interested in simply witnessing this level of awfulness in person. Left Alive falls flat on its face at nearly everything it attempts to do. The story and characters aren’t that compelling, the piss-poor stealth is thrown out the window thanks to the forced combat, and the combat at its best made me burst out laughing in pure disbelief at how terrible it was. So, at least it has that going for it.