Joe Danger is a pretty massive hit for Hello Games. We loved the first game, we enjoyed the sequel, and in 2013 they brought the franchise to iOS. Now, Joe rides yet again on the mobile platform, but this time, he’s shrunk down to Toy Story size and placed in a series of mini themed levels and races.

It’s more of the same, but that should be enough for Joe fans. 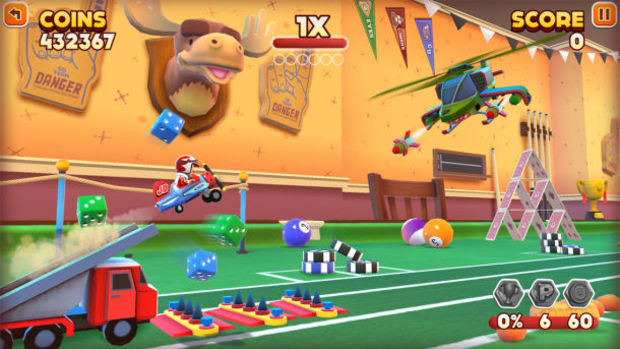 The setup here is  adorable, and mirrors Pixar’s successful franchise of films involving magical toys coming to life. By way of King Gumball, all toys that are opened have a life of their own, and pretty much run around willy-nilly, racing about at their leisure. That’s where the Joe Danger action figure comes in, as well as a playable supporting cast involving other toys and Joe’s crew.

This is a brand new adventure made exclusively for iOS, and as such, the touch-based controls return. It’s all very simple stuff, with the ability to tap and hold the screen to duck, release to leap, or just tap quickly to jump. Just like Joe Danger Touch, it all works as advertised. Along the way coins and other collectibles will float around the screen surrounded by dotted lines, which allows you to tap them directly and grab them.

This creates an interesting meta-game where you’re not only dipping and dodging obstacles and hazards, but you’re simultaneously tapping the screen to grab coins. If the game consisted entirely of just one of those mechanics it would be less justified as a mobile exclusive, but as such, it feels right at home.

Although it’s titled “Infinity,” it’s not an endless runner. You’ll still progress normally with different tasks stage by stage, and unlock new events along the way. The biggest new addition is the host of vehicles you can choose from, such as a rocket, a jeep, a tank, and even airplanes. Most of these control fundamentally the same, but there are some nuances (the rocket hovers over puddles, for instance), and it adds another element of customization on top of the selection of characters. There are also leaderboard and score challenges as well, should you opt for a more competitive experience.

But despite the charming “shrunken” theme, Infinity feels a bit too familiar throughout its campaign. You’ll have a cute moment or two as you pull King Gumball’s slot machine to grab a few new items every now and then, but most of the objectives, obstacles, and level designs just feel like pieced-together versions of previous titles. Whereas Joe Danger Touch felt fresh on a brand new platform, Infinity feels almost like a light expansion with a new coat of paint. It’s a good coat, but something that doesn’t feel necessary.

There are two types of microtransactions (called “IAP” in the mobile arena) in Infinity, and one of them goes over the line of what I’d consider acceptable. The one that isn’t so bad is the ability to buy more coins, the game’s core currency. They can be used to buy vehicles and costumes, which is pretty standard procedure for a game like this. You’ll earn this through normal gameplay, and by progressing through the story you’ll unlock vehicles to purchase at a discounted rate. If you want, you can just buy coins and unlock things early, but you won’t want to do that, because it costs around $4 each to unlock most of the items in the game early — that’s more than the full price of the app. 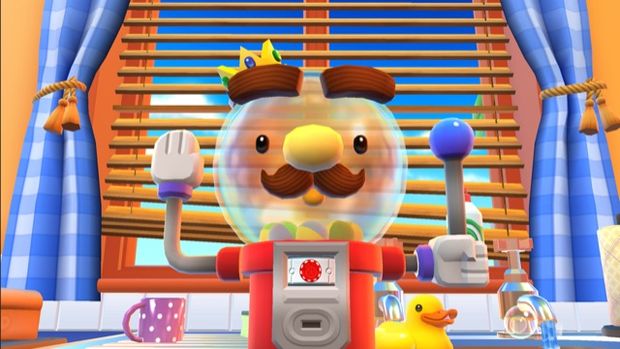 Still, it’s easily ignored, because you can get through the game as normal (albeit at a slower rate). It’s the borderline offensive boosts that annoy me. After failing a level a few times, a giant icon will pop up on the screen asking if you want to buy an invincibility boost in exchange for straight real-life cash. It’s kind of like the Super Guide in newer Nintendo games, but monetized to a fault. You can just close it out whenever it pops up, but it gets in the way of getting to another run, and feels like a giant ad.

Part of me feels like Joe Danger Infinity wasn’t necessary. Joe Danger Touch was an excellent game and complemented the platform perfectly. Although the vehicles bring a different set of flair to the series, the new additions and maps didn’t really blow me away. Having said that, any Joe fan will probably eat up Infinity.