Gather your friends around the PC

At first glance, FORCED looks like a typical action role-playing game, cut from the same cloth as Diablo III or Path of Exile. It’s a bit like that, but it also has elements of a puzzler and a dual-stick shooter. But at the end of the day, I would call it an arcade role-playing game — one that is clearly meant to be played with friends.

FORCED‘s design revolves around cooperation. When played with a friend, the game is highly entertaining. Alone, it’s dull. And when played with strangers, it’s frustrating. The fact that co-op is required to enjoy this game doesn’t make it bad, but it is something you should know beforehand. 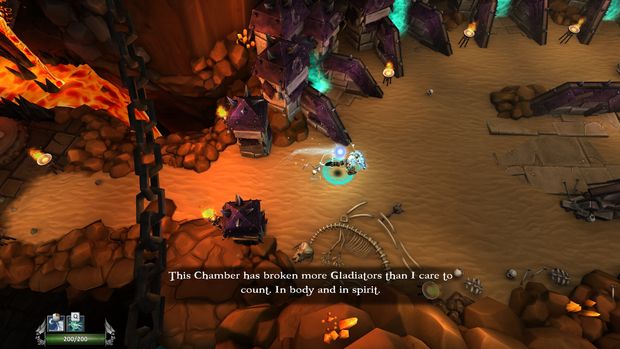 FORCED can be played with friends online or with controllers locally on one PC — or a combination of the two. The crux of the game is broken up into rooms that are accessed from a main hub, and each room contains puzzles that players need to work together to solve, with extra monsters to fight. Completing a room awards each player with a gem, and bonus gems can be earned by doing bonus challenges, such as finishing the room quickly or not taking any damage.

Distinct characters can be chosen before each room, all of which have different abilities — more of which unlock as players earn gems. The unlocks are usable across all characters, which means if you have three gems, you can pick any character and use their level-three skill. This means it’s easy to change characters as you play, and you are always progressing all characters.

The action-based gameplay extends beyond the premise, as you move your character around with the WASD keys, instead of clicking to move like other action role-playing games. The mouse is used to aim attacks, and Q, E, R, and the right mouse button activate special attacks.

The controls are decent with a mouse and keyboard, but the game seems to be designed with a controller in mind. If you are planning on local co-op with one player on mouse and keyboard, and one player on a controller, everything will play just fine. I know most PC gamers tend to only have one controller on hand, so be aware of the fact that the keyboard player won’t be at a disadvantage.

There is a glowing orb that will come to players when they hit the space bar, and this orb is used to activate doors, healing shrines, or other random things around a level. For example, a closed-door might be blocking the players path, and two torches need to be lit to open the door. One player will pull the orb to one side of the torch, and then another player will pull the orb to them, causing it to hit the torch. These puzzles are designed for players to work together to get the orb to go across the correct switch, and this simple mechanic is what makes FORCED into the co-op wonderland that it is. 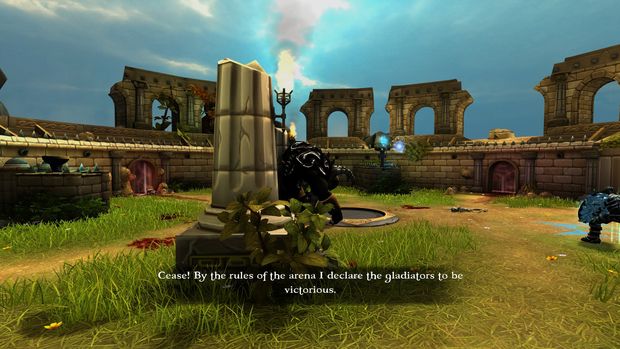 As I said before, FORCED is meant to be played cooperatively. I tried playing it alone, I really did, and while it is possible, it isn’t really any fun. Likewise, it’s also terrible to play with strangers on the internet. You really need at least one honest-to-goodness friend to play FORCED with, and you need to be able to hear each other speak while you play.

I played with a friend over Skype, and that’s honestly the most fun I had with FORCED. We were able to figure out how we wanted to do things, where we each needed to be, and we could coordinate fluidly while we executed our plan.

I also tried playing some random games with others on Steam, and it was a far from enjoyable experience. Some players would run around confused, others would rush forwards and ignore enemies attacking me, while most just acted like I was doing something wrong by trying to communicate with them through chat. 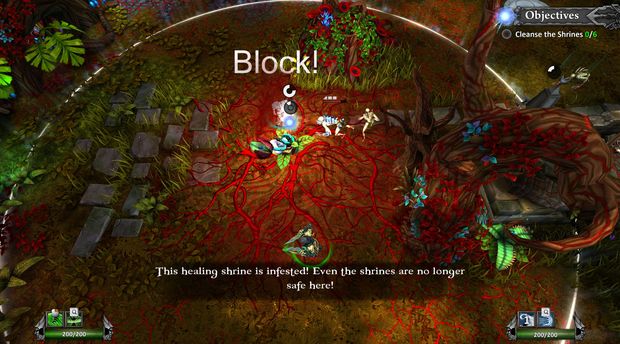 The experience is rather short, but it does have some replayability if you want to complete every challenge in each room. Some people may find it lacking though, as there isn’t any loot, which might scare off certain hack-and-slash RPG fans, and its dependence on co-op makes it boring to play on your own. Also, since it’s a puzzle-based game, once you solve said puzzles the levels aren’t as fun the second time around.

FORCED isn’t the biggest game on the PC, but it’s not trying to be. Rather, it tries to be a fun co-op experience — a goal that it accomplishes quite well. Grab the four-pack off Steam, grab three friends, and play FORCED for the weekend. It’s a one-trick pony, but it’s a good trick indeed.