Mashups are often born purely for fanservice-related reasons, and as you can probably guess, the results are mixed. For instance, it would be tough for an RPG developer to make an action game based on two different puzzle properties, but odder mixes have been done in the past.

With Etrian Mystery Dungeon, it feels like a match made in heaven. Spike Chunsoft and Atlus have been making RPGs for what seems like a lifetime, and Etrian Odyssey is basically a Mystery title already strictly in terms of its dungeon crawling emphasis.

As one would expect, it mostly works out even if the formula is a bit dated. 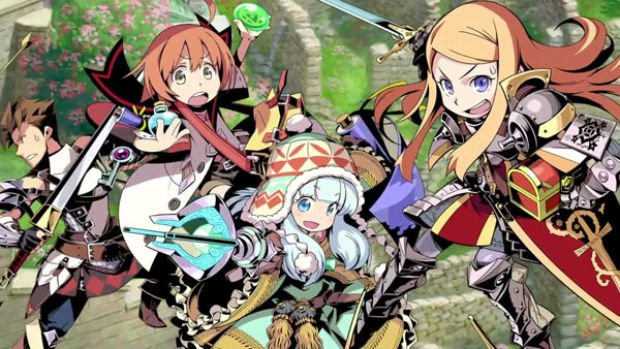 If you’ve never played a Mystery Dungeon title before, it’s fairly easy to explain, despite the fact that each title is quite difficult to master. It’s a roguelike (and I actually mean roguelike, not the overuse of the buzz term to denote permadeath) that takes place mostly within randomly generated labyrinthine locations, tasking one with staving off monsters, earning loot, and leveling up a swarthy crew. It’s entirely turn-based and takes place on an invisible grid that can be toggled at will — so if you don’t move, even if there are enemies in the room, nothing happens.

It’s less of an action game and more of a tactical affair, where position and conservation of gear and skill points matter. In Etrian Mystery specifically this is mostly due to the fact that every step takes FP (Food Points), you can only carry a certain amount of items into a dungeon, and the toughest limitation of all — your party has to actually finish or escape a dungeon to get any loot and prevent any losses of gold or items. If you fail in any fashion, it automatically saves your game and it’s back to town with your tail between your legs.

The way movement and combat works is through a “leader” system, controlling one of four members with the other three in tow. While you’re in control one can manipulate any character at will, but the others will go about their business automatically with a sort of Gambit-like system. You’ll also be able to change your formation to protect more fragile members, and since many monsters can one-shot casters, it’s important to get used to the practice.

Party composition absolutely matters too, and having two melee with two ranged characters will make a world of difference. Naturally choosing what classes will take you quite a while to decide, as there are ton of options, including but not limited to tanks (Defender), healers (Medic), debuffers (Hexer), warriors (Landsknecht), ninjas, samurai (Wanderer), dancers, casters (Runemaster), and more eccentric hybrid classes like royals. CPU characters mostly make good decisions, but unfortunately the Gambit mechanic only has an “on or off” toggle for abilities — no complicated formulas to flip through to get exactly what you want. Of course, that’s where manually switching leaders comes in, and bosses give you direct control over each member for every action.

There’s no way to sugar coat it, Etrian Mystery Dungeon is tough. At one point in the second dungeon, I descended a flight of stairs into a room with five enemies who could each two-shot the party. One of them killed my caster instantly, grew stronger as a result, and one-shot my subsequent characters. Shortly after I realized the auto-level system was off, and I hadn’t assigned skills for my party. I returned after some grinding and my runemaster smoked half the room with his newly acquired spells before they could make a move while my tank taunted the remaining foes to soak damage. It was immensely satisfying.

Each individual dungeon is no joke, and you pretty much have to do sidequests and level up a balanced party, including your reserves. A decent chunk of quests that are required to buff up individual classes also must be done solo without help, which can get very dicey on lower dungeon levels. Etrian Mystery Dungeon makes you work for pretty much everything, and punishes you for failing. That’s perfectly okay with me as the tools to succeed are sufficiently provided, but one should definitely know what they’re getting into. 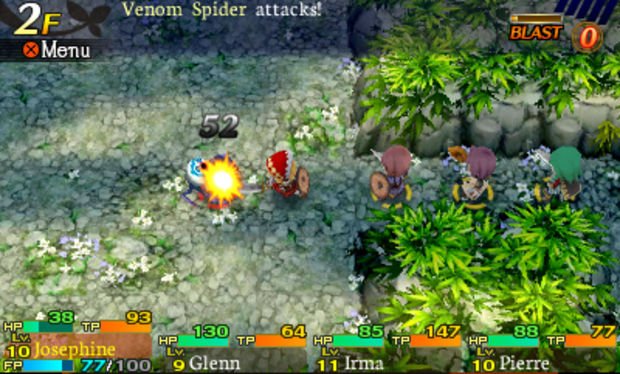 The reason what Etrian Mystery works so well is mostly due to the fact that the game opens up the more you play it. Each dungeon layout is randomly generated, but you can build “forts” to lock in certain levels for a hefty fee. As a secondary benefit you can also send standby party members there to train at a higher experience rate, and later in the game they serve a new purpose of keeping gigantic monsters away from town.

As you start to unlock new parts of town you’ll also have the option to redevelop areas of your choice for extra benefits, like more reserve spots in a party or extra stock in the town shop. The town itself is all menu-based, but it’s incredibly easy to move around, organize your party, save, locate missions, buy items, and eat one-dungeon food buffs. The art style isn’t all that impressive once you’re in the actual dungeons, but the character models, town, and landscapes are breathtakingly beautiful, as is the soundtrack.

It’s also important to note that a rich engrossing story isn’t really the core focus here so much as constantly entering dungeons and bettering yourself. While there is a tenuous narrative afoot, the real meat of the universe is found in tomes or in-game database entries, as most of the dialog is basically table-setting for more dungeon crawling. I really enjoyed some of the relationships between the townsfolk, but they didn’t have a lot of interesting insights or meaningful backstories. 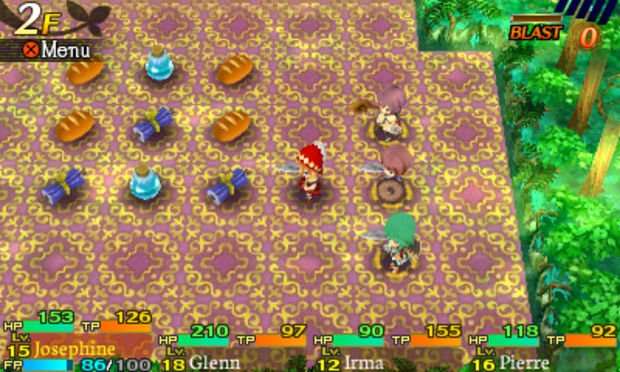 The more I played Etrian Mystery Dungeon the more I fell in love with it. While the learning curve is pretty steep and the rewards are fairly low-end early on, you really do get as much as you put in. It gives existing Mystery fans a lot to stick around for, and serves as a nice entry point for newcomers, so long as you are willing to learn.