As a Sega Genesis child, the news that Disney Epic Mickey: Power of Illusion was going to be a spiritual sequel to Castle of Illusion sent me into a fit of joy spasms. Considering how tedious the original Epic Mickey was, my interest in this handheld excursion easily dwarfed any held towards the home console sequel.

I expressed only the tiniest of concerns regarding the touchscreen controls back when I demoed Power of Illusion in September. Everything else was so colorful and polished that I was willing to ignore those and other apprehensions gently bubbling in the pit of my stomach.

I really should learn to trust my gut more often. 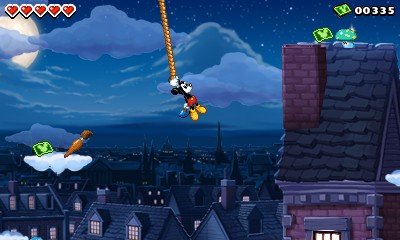 As explained in the original Epic Mickey, Disney characters who are forgotten are sent to live out the rest of their days in the Wasteland. Some try to make the most of their unfortunate situation, but others are none to happy to be discarded. Such is the fate of Castle of Illusion‘s villainess Mizrabel, and she conspires to escape the Wasteland by any means necessary. Her motivations actually threatens to give the plot an iota of depth, but of course they’re never explored further.

To achieve her goal, Mizarbel needs Heart Power collected from famous Toons. She is somehow able to drain the essence of beloved Disney icons like Snow White and Simba, trapping them inside her castle and using illusory magic to reflect the Toons’ home worlds. So instead of visiting rundown Disney theme park attractions, Mickey will get to explore notable locales like Never Land, Agrabah, and Atlantica.

Screens and video do not lie: this is a beautiful game. From the detailed environments to the smooth sprite animations, DreamRift did a fantastic job capturing the bright and colorful Disney style. Each stage features around four parallax layers, and when you flip the 3D slider on, the background simply pops.

The music is equally rich, with crisp, original orchestrations inspired by the source films. Better still, a small number of tracks are revamped versions of Castle of Illusion tunes. In the first level, you hear a rendition of the forest theme; in the shop, a variation of the interstitial music plays; and in the final showdown against Mizrabel, there’s a dark twist on the boss theme. Seriously, I got goosebumps when I heard those nostalgic melodies.

Mickey’s repertoire includes his signature butt stomp from Castle of Illusion and melee, paint, and thinner attacks from Epic Mickey. All his attributes can then be upgraded in Scrooge McDuck’s shop by spending E-Tickets. In a similar fashion to DreamRift’s previous title, Monster Tale, you can string attack combos to juggle enemies even after they’ve been defeated; the more you keep them airborne, the more health and E-Tickets they’ll drop. It’s a clever way to reward players for laying an excessive beatdown.

The big gameplay hook is the use of the touchscreen to paint or thin out objects or characters highlighted on the touchscreen. For example, if a gap is too wide to clear by jumping, you might notice the outline of a bridge on the bottom screen. Tapping it with the stylus initiates a mini-game of sorts where you must trace the outline of the object as accurately as possible, and how well you stay in the lines determines the “effectiveness” of the resulting object. 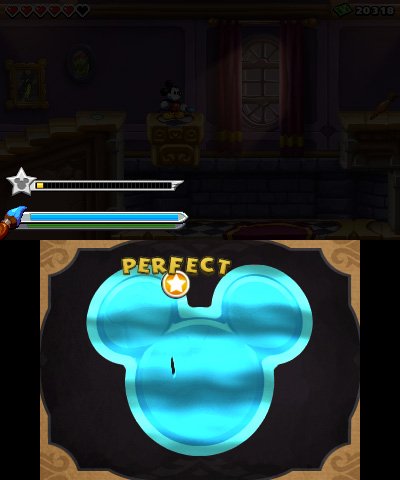 Having to manually draw each one of these paintable objects absolutely kills game flow. I didn’t mind it so much the first few times, but the novelty quickly turned to annoyance. This is especially true in segments where you have to paint or thin out several objects in quick succession, such as in the boss battle against Jafar, where he keeps destroying the floor and you have to keep drawing it back in. This mandates that you always have the stylus at the ready, either on a nearby surface or awkwardly wedged between your index finger and the edge of the 3DS.

The effectiveness grading doesn’t even matter all that much. If you get an “okay,” your floating platform might have a spike at the tip that you should avoid touching. If you get a “perfect,” your cannon won’t disappear after firing three times. Yet there’s never a situation where you need the best possible object around, and unless you wildly draw outside the lines, you’re always at least going to get an average rating. It’s just an exhausting exercise.

If I may bring up Monster Tale once again, that game only required simple taps on the touchscreen to feed your critter or direct it to attack. I would have much preferred if Power of Illusion adopted that system, so that a simple tap of the finger was all it took to create or destroy an object. Leave the precision drawing to key events. 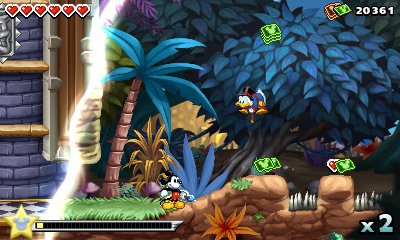 Before each level, you fill slots on a loadout bar with Sketches, items that you can spawn at any time as long as you have enough paint. Such items include temporary invincibility, Tinkerbell’s pixie dust for a slower rate of descent, and the Scrooge McDuck summon in which he’ll bounce around the screen on his cane like in DuckTales on NES.

Unfortunately, you have to go through the whole rigamarole of painting a Sketch to use it, and with the exception of a floating platform that you can place anywhere you want, none of the items are all that helpful. There’s a treasure chest that generates random items, but it’s pointless when enemy drop rates are so high to begin with. Even the attack summons — sorry, Scrooge — are quite ineffective at clearing the screen of foes.

Throughout the worlds are Disney characters in need of rescue. Once you’ve saved them, they’ll take residence in individual rooms inside the Fortress, your home base between levels. By spending acquired upgrade stars or completing optional side quests, you can spruce up their rooms to look like scenes out of their home films. 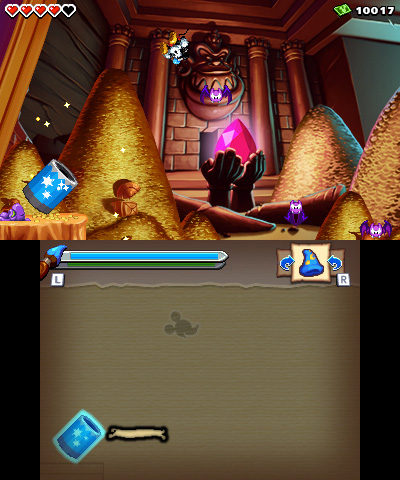 Some quests are as simple as painting a requested object right then and there. In others, you play errand boy between residents of the Fortress, such as obtaining a threading needle from Rapunzel so Wendy can stitch Peter Pan’s shadow back in place. It’s really quite amusing to see these characters interact outside of their individual universes.

Then there are quests that send you back to previously cleared stages in order to rescue characters or locate treasure chests that weren’t there on your first pass. Since you can’t exit from the menu in the middle of a level without losing all you current progress, you have to play through the entire stage again, even if whatever you are looking for is near the start. In fact, it’s not uncommon to have to return to a level three times or more!

The only purpose that the lack of a proper “escape” function serves is to artificially lengthen the game, a truth that didn’t really sink in until my adventure abruptly stopped. See, there are only three worlds in total, yet I’m certain that four were originally planned. Each world is located in the East, West, and South Wings of the castle — isn’t it’s only logical that there ought to be a North Wing as well?

If you look at the game’s box art, which I’ve used as this review’s header image, you’ll notice four villains — Captain Hook, Jafar, Ursula, and the Queen of Hearts — peeking out of doorways leading to their respective realms. Neither the Queen of Hearts nor Wonderland appear in the game; in fact, the final box art was altered slightly, replacing the Queen with the non-villainous Mad Hatter. If there was to be a fourth world, it must have been removed very late in development. 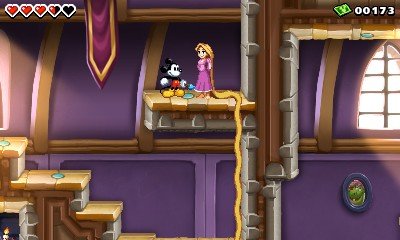 That’s not all. Both the Peter Pan and Aladdin worlds feature four levels followed by a battle against that film’s antagonist. However, The Little Mermaid world ends after only three levels, and you never fight Ursula. Rather, you find her just hanging out in the water and rescue her like any other character. The room to the final battle with Mizrabel opens immediately after completing that third level — it’s as though the game is saying, “Eh, that’s enough.”

For what it’s worth, I think DreamRift did a remarkable job regardless of the shortcomings. Like the original Epic Mickey, there’s a lot of love for Disney history, and like Monster Tale, there’s a solid action platformer at its core. It’s just a shame that various design decisions, both intended and possibly not, threw a major spanner in the works.

Disney Epic Mickey: Power of Illusion is beautiful to look at. It’s also quite obviously unfinished. The building blocks of the ultimate Mickey Mouse game are here, but we’ll have to wait yet another day to see that vision become reality.