Dillon’s Rolling Western was first unveiled during E3 2011 and has since served as the unofficial face of the Nintendo eShop. While 3DS owners wondered whether Nintendo’s latest digital store would be bogged down by the same low-rent software that pervaded DSiWare, Dillon was shaping up to be the kind of beefy experience that would make players want to connect their handhelds online.

So why is this review two months late? Because Dillon’s Rolling Western is such a slog that I had difficulty motivating myself to keep playing. Seriously, it feels like driving 1000 miles down a single stretch of highway, a monotonous endeavor punctuated by the risk of fiery death should you lose your focus on the road for even one second.

It’s really a shame, since Dillon is every bit as content-rich as we had hoped it would be.

Dillon’s Rolling Western is an anthropomorphized homage to classic spaghetti westerns — kinda like Rango, except more colorful. Dillon is a freelance armadillo ranger who protects small villages from invading Grocks, rock creatures that steal the towns’ livestock. Each invasion lasts for three days, after which the Grocks’ dens recede into the ground and Dillon moves on to his next job.

The campaign is actually a twist on the tower defense genre, the hook being your ability to physically engage the enemy in combat. Using your funds, you can build lookout towers and equip them with a variety of armaments, from short-range shotguns to long-range cannons. Most of the time, however, you will face the Grocks mano a mano, using your rolling attack to grind them into gravel.

Dillon employs the joystick-touchscreen control combo most recently seen in Kid Icarus: Uprising, with the Circle Pad commanding general movement, the touchscreen controlling the speed and direction of your rolls, and the L and D-pad buttons for various other actions. This scheme also invites the same issues present in Uprising, namely the lack of comfort in trying to cradle the 3DS in your left hand while manipulating the stylus with your right (no lefty option, either). I’ve been able to find a position that more or less suits me, but if you are one of those folks who cramp easily, this is gonna be a rough ride.

Still, it’s a novel way to play. Spinning around the plains, searching for ore to mine and towers to repair, is quite nifty in the same way that trackballs on old arcade cabinets were. It’s a greater sense of control that makes you feel more active than if you were you merely mashing buttons to curl up into a ball. 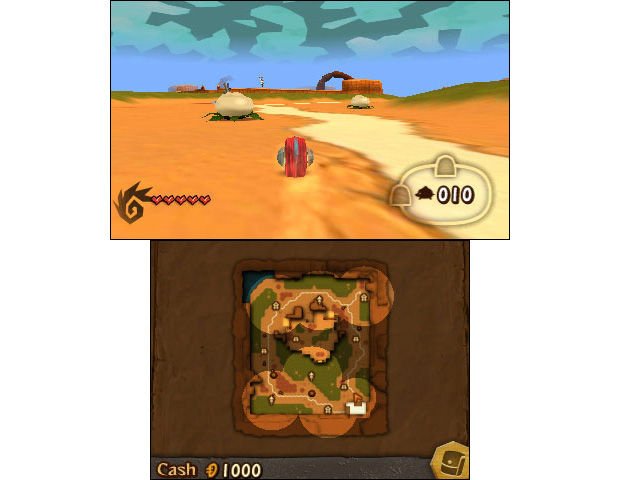 Each day is split into two phases: preparation and raid. During preparation, you have until the evening to mine ore, equip towers, search for secret treasure, and construct defense gates around the village’s multiple entrances. You also have to be on the lookout for Scruffles, these meat bun-looking plants, that can be fed to the town’s population of Scrogs, the pig-like critters that serve as the region’s chief source of commerce. Feeding Scrogs these Scruffles will increase their numbers, giving you some more breathing room for the next phase.

Once the sky turns red, the Grocks will pop out of their dens and march towards the village along pre-set paths. Every day for three days, the number of invading Grocks will increase, and as you move from village to village, more powerful Grocks will appear. Should you lose all your Scrogs, you will fail your mission, so you must keep the pressure on, also making sure to repair any towers that the Grocks try to destroy. Once a day’s raid is complete, the town pays you for your performance, then you can enter the tavern to save your game, restore health, purchase more powerful gear like claws and boots, or take on side quests from various citizens.

All in all, Dillon is quite the meaty adventure with a playtime of 10+ hours. And it’s precisely because it’s so lengthy that it feels like a thankless chore. 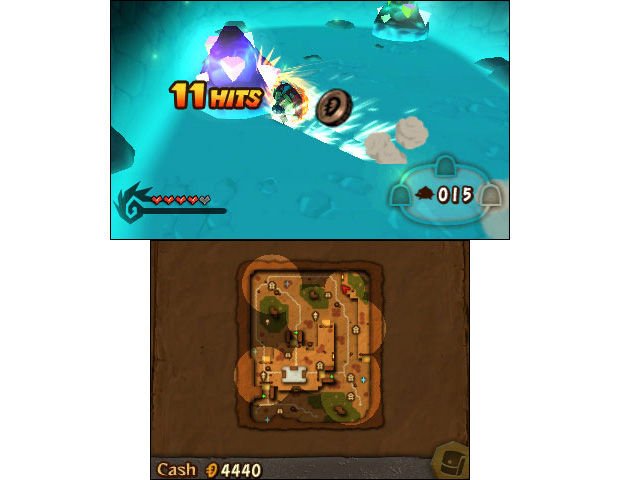 If you’ve ever played tower defense before, you’ll recall that you typically manage a small map, handling your offensive and defensive stations on the fly. Each wave of enemies lasts but a few minutes, gradually extending over the course of the campaign, yet the time seems to move much more quickly since you are constantly plotting your next move.

In Dillon, on the other hand, because you assume the role of a character on the map itself, the stages feel far more expansive than any map in your typical tower defense title. You can’t just point to a tower to add a gun; you have to physically run (or roll, in this case) across the terrain. Since the path is often not a straight line, you have to navigate around rivers, pools of lava, or rocky outcraps peppered across the land.

During the preparation phase, you are meant to get acquainted with the lay of the land in addition to all your other duties. The game grants just enough time until the raid to ideally do everything that must be done; on the flip side, it’s just short enough that you feel constantly pressured. Should you not be completely familiar with the environment, you may not be able to feed the Scrogs or earn enough cash to fix towers before evening.

You can still upgrade towers during the raid, but your focus will be more on warding off the Grocks. You start each level with a limited amount of funds anyway, so chances are you’ll only be able to equip one or two towers per day. Instead, you’ll be running around, fighting monsters, and praying that you can end a particular battle before a different Grock reaches the front gate. Normally, I would appreciate such a high level of tension, but in Dillon, a raid can last upwards of 10 or 15 minutes, though it feels much, much longer than that.

If you perform poorly during a raid, you might attribute your failure to lack of proper preparation. Since you are only allowed to save the game at the end of the day, retrying a section means starting all the way back at the preparation phase, meaning you just wasted 20 or so minutes. Full completion of a level can take between 40 to 60 minutes of running around the same map, engaging in the same types of enemies that run in the same patterns, three times in a row. By the time I cleared the third village, I felt completely drained and ready to quit, yet I wasn’t even halfway through the game.

The best part? Unlocking the next village requires a set number or stars — you earn up to five stars by completing a level as quickly as possible and fulfilling all the villagers’ quests. The first time through a town, it’s almost impossible to earn more than three stars, but you can return to past levels and not have to worry about fund restrictions anymore. In later levels, you may start sliding down in rank to two stars. If that happens, you may not be able to progress further unless you return to a previous village and run through the whole three-day cycle again, only slightly faster given your additional cash and abilities. But should you finish with no higher rank to show for your trouble, it’s back to square one. 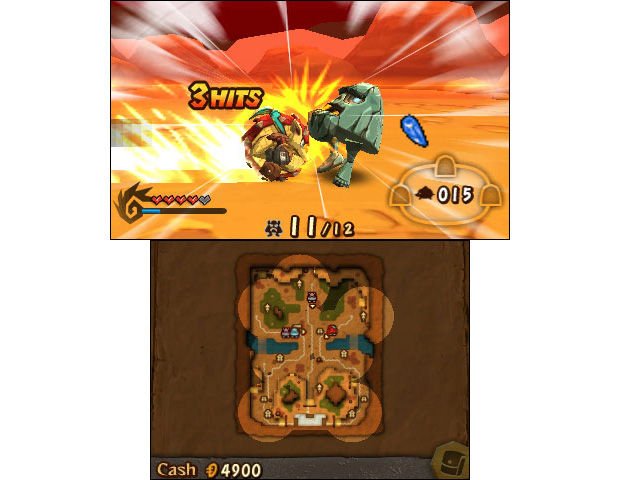 It’s appropriate that Dillon possesses a grind attack that wears down his opponents, because this whole game is a damn grind. The biggest problem is that this “padding” is a byproduct of the genre. By placing you on the map itself instead of in the clouds as an omnipresent supervisor, the game compounds the genre demands of strategy, patience, and endurance to exhausting degrees. Who has the kind of fortitude?

Dillon’s Rolling Western demonstrated a lot of promise out the gate, adding a literal “spin” to the tower defense genre, but the journey is just too long and tedious. It’s the videogame equivalent of a triathlon, only with the added bonus of having to redo any one leg of the event or the entire event itself should your performance ever fall slightly below satisfactory.