The Dead or Alive series has never quite made it to the top tier of world-favorite fighting games. Despite having a large, dedicated fanbase, it’s always hovered somewhere below Street Fighter, Mortal Kombat, and Tekken, though well above other great, lesser-appreciated series like Darkstalkers, Fatal Fury, and Guilty Gear, in terms of sheer popularity.

That’s why I can’t help but feel doubly sad for Dead or Alive Dimensions. Once again, the series has been shown up by a “bigger” series. Super Street Fighter IV 3D Edition was a 3DS launch title, is one of the most beloved fighting games ever, and it looks nearly as good on the handheld as it did on the PS3/360.

On the other hand, Dead of Alive Dimensions has been released during the 3DS’ first official lull in sales, is from a franchise that few Nintendo-loyalists (and therefore, current 3DS owners) have ever played before, and it looks much more like an O.G. Xbox title than a PS3/360 game.

With all that going against it, is Dead or Alive Dimensions doomed to fail, or is this the start of the series’ ascension to top-tier status? 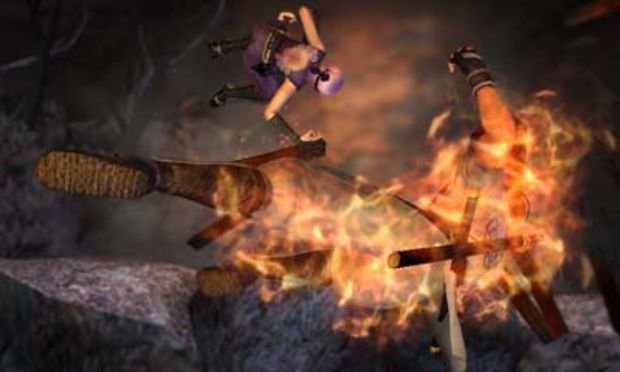 There is so much going on with Dead or Alive Dimensions, I scarcely know where to begin. Normally when in doubt, I start with a game’s story. In this case, that might just confuse me (and you) even more, but I guess I’ll give it a go.

Dead or Alive Dimensions‘ storyline (which is a retelling of the story of Dead or Alive 1-4) is so incomprehensible that it makes Xavier: Renegade Angel look like Blue’s Clues. Fourteen-year-old ninja girls get possessed (and promptly un-possessed) by forces that are never explained; a guy named Fame Douglas makes a speech about how fighting tournaments can change the world (right before he is assassinated); little sisters get smacked in the face by their older brothers after absolutely no provocation; evil clones explode; good clones suddenly try to kill their best friends with psychic fireballs;  and a white-haired lady in a skin-tight leather one-piece tells a man she just met that it’s time for “Madness or death! The choice is yours!” before slapping him into unconsciousness.

These are some of the more comprehensible high points of the game’s narrative. Nearly every single line of the game’s story mode is Barry Burton-level ridiculous. As long as you know that going in, you may have a good time with it. I sure did.

Another plus for the game’s story mode is that it does well to slowly teach you the ins-and-outs of Dead or Alive‘s signature fighting style. The game works on the rock-paper-scissors principle, but with hundreds of different kinds of rocks, papers, and cutting apparatus.

Like most fighting games, normal strikes (both punches and kicks) are nullified from blocking. What makes Dead or Alive different is that all characters can perform a type of offensive blocking called a “hold,” which will counter a punch or kick and dish out damage to the aggressor. Likewise, blocking and holds are vulnerable to throws, while throws are easily crushed by punches and kicks.

That’s just the basics. Mix in the standard high-medium-low guessing games found in most 3D fighters, along with throw reversals, throw combos, juggle combos, special moves like teleports and projectiles, environmental hazards, and tag-team mode, and you’ve just scratched the surface of what Dead or Alive‘s fast-paced, risk-reward fighting system has to offer. 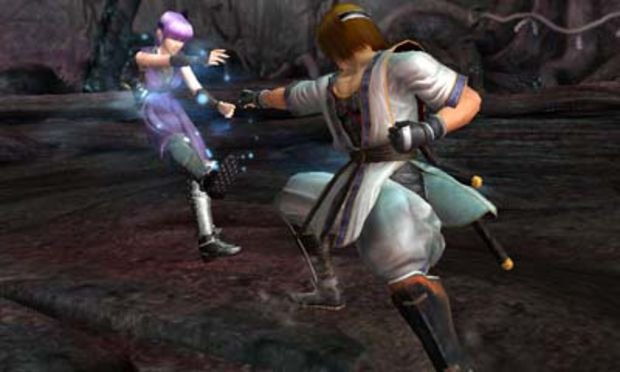 So that’s what Dead or Alive is in a nutshell. When it comes to specifics, Dead or Alive Dimensions is an amalgamation of the four prior games in the series, with the addition of bosses that were previously unplayable, a bunch of 3DS-specific features, and online play.

Every feature of the 3DS gets used at some point, including the gyroscopic camera control (for viewing backgrounds and collectible in-game figurines), motions sensor (for making said figurines jiggle), StreetPass (for downloading ghost battles against opponents you pass on the street), SpotPass (which allows you to download new costumes and unannounced content), the 3DS microphone (used to call in Samus from the Metroid series for an assist while on a special Other M-themed stage), and of course, the signature, glasses-free 3D display.

I’m usually all for making full use of the 3DS’ special display, but with this game, I kept it off most of the time. With the 3D on, things tend to look a tad ghostly — more so than they do with Super Street Fighter IV 3D — and the frame rate is cut in half. With the 3D off, everything looks firm and solid, and the game runs at a constant 60 frames per second. 3D is fun to leave on during the bizarre cut scenes, but during gameplay, frame rate trumps the third dimension. 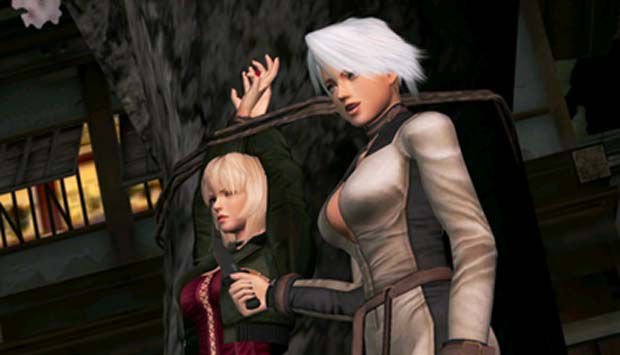 I’m also a big fan of how the game controls on the 3DS. I know not all of you will be, but I found the system’s tight, tiny button and d-pad layout to be perfect for four-button fighters such as this. That might have something to do with the fact that I’ve been playing Super Street Fighter IV 3D on a daily basis since the 3DS launched, so I’m really comfortable with the 3DS by now.

With fighting games, I’ve always said that people will prefer whatever they’re used to, be it a stick or a control pad, and that’s not different with this title. As for 3DS-specific controls, you can perform any combo by selecting it from your character’s move list, which is always present on the bottom screen. I think it’s taking things a little too far, to make even the most complex combos in the game available at the touch of a button, but if that helps non-fighting fans to enjoy the game, I’m not going to hate on them for it.

As for the game’s online mode, so far I’ve only played with people from my 3DS friends list, and I’ve barely experienced any lag. As for the online combat itself, it comes in two forms: one-to-one combat against an online opponent, or co-op tag team missions against CPU-controlled challengers.

As much as I enjoy fighting other people, I think I enjoyed teaming up with a friend against the CPU even more. It’s a nice design decision that completing these tag team missions unlocks additional content in the game, like costumes and figurines. Some of the later missions are really challenging, and I think it will be a long time before my friends and I beat them all. 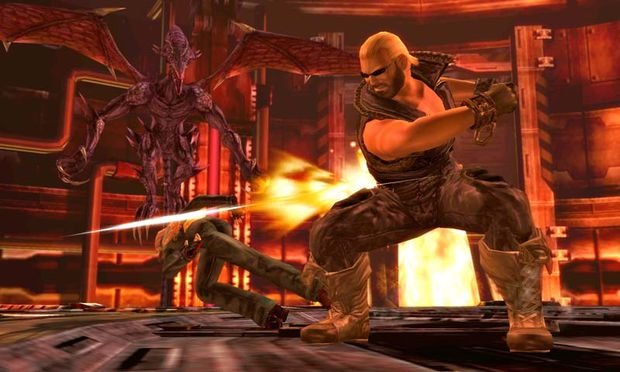 Speaking of which, I think it will be an even longer time before I unlock all of the content in Dead or Alive Dimensions. There are 1000 figurines to unlock, god knows how many costumes, and 25 characters (with a 26th rumored that I still haven’t found yet). It’s sort of irritating that upon first booting up the game, so few of those 25 or 26 playable characters are available, but it only takes a few hours of the game’s story mode to unlock most of them.

The problem with that is, once you unlock some of those previously unplayable boss characters, it really throws off the balance. Though high-level players will likely have no problem taking out human opponents utilizing some of the heavy projectile-dependent boss characters, newcomers and relatively casual Dead or Alive players are likely to become annoyed with getting spammed by blue lasers fired off by lazy online opponents.

I have a few other niggling complaints about the games, like the lack of animation in a lot of story mode’s cut scenes, the lack of instant rematch against strangers in online combat, and a pervading sense of corny, tacky, yuckiness that pervades throughout this (and every other) Dead or Alive title. For the most part, I can laugh off the impossible boob physics, the ridiculous cultural stereotyping, and general sense of idiocy here for the unintentionally amusing kitsch that it is, but too much of that stuff in one sitting will make you feel like your brain is shrinking. 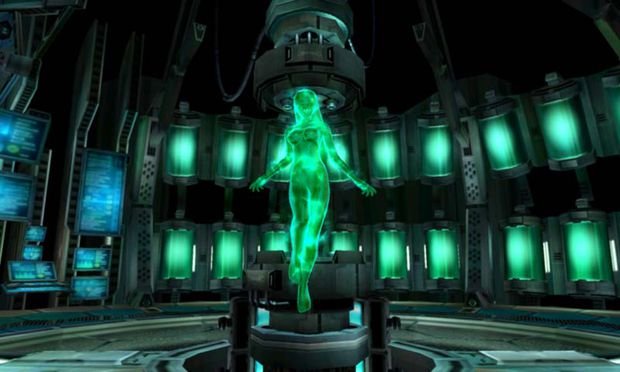 Bottom line: Dead or Alive Dimensions is a really fun fighting game, one that this old Street Fighter loyalist has really grown to love. It doesn’t have quite the same level of variety among the playable characters as my favorite fighting game on the 3DS, but it makes up with that with loads of unique content, single-player, versus, and co-op re-playability. Plus, a seemingly endless amount of unlockables and modes.

With the promise of tons of free DLC on the way, and the relatively lag-free online combat, it will be a while before I put down Dead or Alive Dimensions.

Filed under... #Dead Or Alive#DS