The Guild01 collection is a very special project that I’m glad we could be a part of. Although the last game in the set isn’t slated for a release out of Japan, the mere fact that Level-5 decided to take a chance with any of them is good enough for me.

Crimson Shroud signifies the end of the western releases of Guild01, so its release is bittersweet. Thankfully, it’s also the strongest game in the package, and one of the most unique games on the 3DS eShop right now. 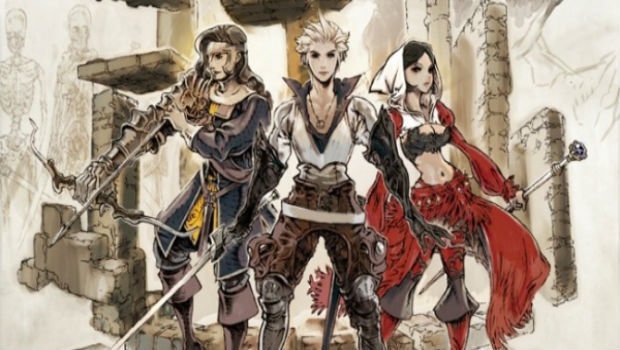 The legendary Yasumi Matsuno, who worked on such treasured games as Ogre Battle 64, Final Fantasy Tactics, and Vagrant Story, is at the helm as both the writer and director of Crimson Shroud. Given the pedigree alone, it’s bound to turn some heads — especially for old-school JRPG fans.

This isn’t your cookie-cutter JRPG, however — dice rolling is paramount in Crimson Shroud. No, I don’t mean the secret number-crunching machinations that go on behind the scenes in many RPGs that determine damage and stats; I mean there is literal dice rolling, complete with D20s and everything.

The game doesn’t half-ass this Dungeons and Dragons feel either: during most of your journey, the characters and enemies even have little figurine bottoms on them, and the dialogue often reads like a dungeon master is deciding your fate. Little touches like these make the game feel like it has a smaller production value for sure, but it adds a ton of charm, and offers an experience most other games gloss over.

Story-wise, Matsuno compared the ambition of the narrative to a “short story,” which I would say is apt. You’re presented with three characters, Giauque (the kinda sorta main character), Frea (the mysterious member of the Qish race), and Lippi (Giauque’s close friend and confidant), and the crux of it basically deals with their hunt for the fabled “Crimson Shroud” — an item of extreme power.

You’ll progress through the game using a map on the game’s bottom screen, and like D&D, pitfalls, traps, and encounters could occur at any moment, in addition to the peppering of story sequences here and there. Normally I’m not a fan of static story sequences without voice acting, but it absolutely fits the “dungeon master” narrative style here, and given the low scale of the game, it makes sense.

If you don’t buy into the lore, a number of these story sequences are optional, and are enacted by selecting the “reminisce” option at key points. Basically, how much backstory you get is mostly dependent on your personal interest for it, which is a nice touch for people who just want to enjoy the RPG side of things. 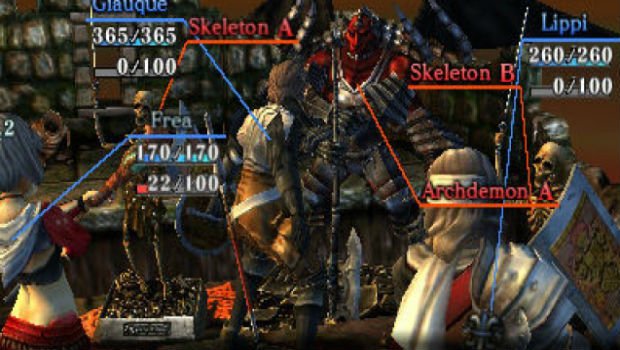 Just like classic pen-and-paper RPGs, you’ll find a number of events that bring you at a crossroads, and leave you at the fate of the dice to decide whether or not you dodge a trap, for instance. Naturally, given that Crimson Shroud unabashedly pays homage to these types of games, there’s lots of reading involved. That’s okay though, because special credit should go to the writers and the translation team, as they do a great job keeping you enthralled.

Again, you know where your loyalties lie when it comes to these types of experiences, and if this doesn’t sound appetizing, I’d be weary of plunking down the price of entry for this.

Surprisingly though, even when you look further than dice rolling, Crimson Shroud touts one of the most complex RPG battle systems I’ve seen in recent memory, due to the fact that layers of strategy are present in nearly every facet of the mechanics. There are elemental chains, elemental counters, optional dice rolling power-ups that let you test chance, mechanics such as the ability to skip turns and make your next turn quicker, and more.

Since combat is set up like a typical JRPG (think Final Fantasy), it’ll be easy to pick up, but still difficult to master. Do you buff yourself, or an ailing party member? Do you spread out your elemental abilities, or attempt to chain them in succession?

You’ll constantly be asking yourself these questions as you stop and thinking during some of the game’s harder fights, which is a welcome change from the blazing action combat systems found in other RPGs. All of the game’s controls are wonderfully designed, allowing you to take advantage of either the touch screen or the d-pad and face buttons (yes!) — even for actions like dice rolling. 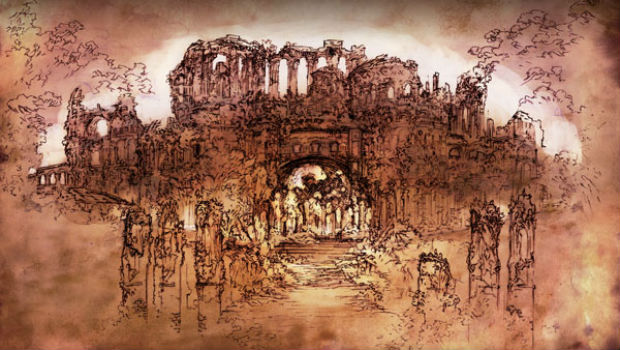 There are no character levels in Crimson Shroud, as your performance is entirely dependent on your skills and items. While I don’t normally like this design in lengthier RPGs, it lends itself very well to a shorter, bite-sized affair, eliminating the need to grind (unless you decide to grind for items).

You may find yourself begging for a level grind though, as some of the encounters in this game are tough, and will require you to actually learn the game’s intricacies. In one particular instance, I struggled pretty early on against a giant Minotaur, and almost directly after the confrontation, I encountered that same Minotaur in zombie form — only this time, he could leech health.

I ran into a number of issues, namely the fact that two of my three party members were geared to use dark abilities — which the zombie Minotaur resisted. After a 15-minute fight where he was leeching health faster than I could deal damage, I loaded my last save file. After that, I tried to keep my item elements diversified a bit, and I didn’t run into too much trouble — save for a few more lessons in tactics.

Crimson Shroud lasts around seven hours, but given the aforementioned tough and lengthy battles, it could end up taking a lot more time to complete. After you’re done, there’s a New Game+ option that allows you to retain your gear, and increases the difficulty of the game. For the price, this little $7.99 package is quite a bang for your buck.

Although there are a number of hang-ups, and the audience is decidedly niche, Crimson Shroud is an incredibly unique game that will satisfy table-top fans everywhere. While I didn’t get into the story as much as Matsuno probably hoped I would, I had a great time hanging out with Giauque and crew in this incredibly well-crafted RPG.