When Paranormal Activity became an international blockbuster it ushered in a highly profitable era of B horror films. Since then cineplexes have been inundated with cheaply produced, easily marketable and quickly forgotten horror films. Blumhouse Productions is at the forefront of the industry, producing such hits as Insidious, Sinister and the far better than it had any right to be Oculus.

With budgets as low as $100,000, seemingly anybody can make a mint with a quick and easy horror film. If Creeping Terror were a movie I could easily see it joining the ranks of such films as It Follows, Goodnight Mommy or The Babadook. As a 3DS game? Eh, it’s a toss-away title. 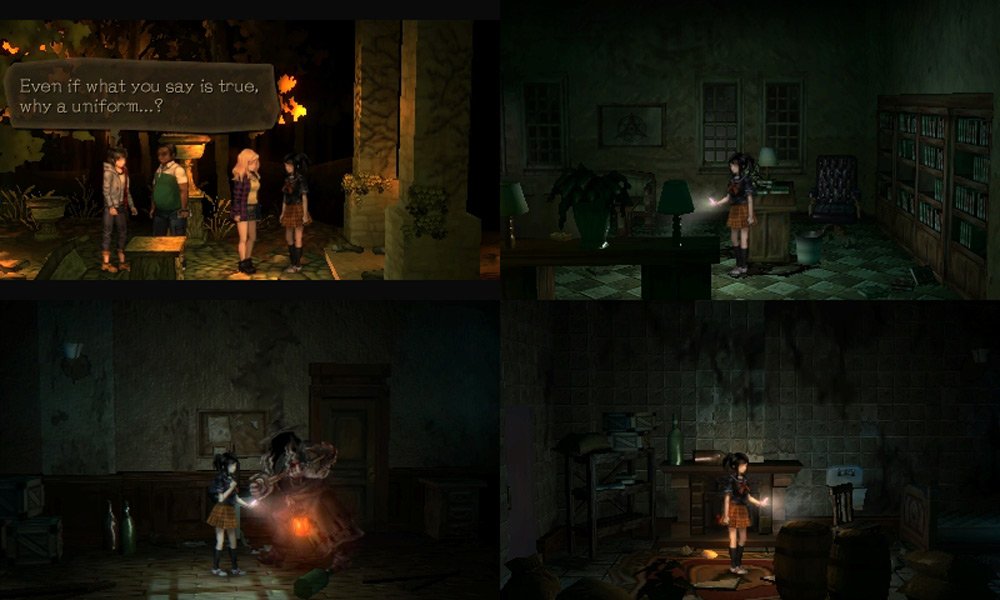 Creeping Terror has all the makings of a great Blumhouse Productions movie. The setting is a dilapidated mansion where local teens have seen a mysterious figure rummaging about. Some high school students have apparently gone missing at the mansion, a fact the four main characters — the playable Arisa and her friends Bob, Ken and Emily — literally don’t give a shit about. They’re just there to make a sensationalist news piece for Bob’s web series. As soon as they go inside, Arisa is quickly separated from them and my adventure begins.

With slight influences from the SNES classic Clock Tower, my goal is to get Arisa and her friends out of the house before it’s too late. Hot on my tail is the Shovel Man, a hulking man that jumps into the scene when he’s least wanted and chases me around until I can find a good hiding spot. The Shovel Man is supposed to be scary. He is not. Once I discover how easy it is to subdue him — a single rock will stun him — he ceases to be frightful. Instead, as I wander around the mansion collecting keys, documents, and supplies, he and the other two monsters I meet are more of an annoyance. Whenever they show up I just throw some shit at them and I’m on my way.

If they do catch me, a rapid tapping of the A button will push them off. It’s almost comically easy to get away taking no damage. There is a point halfway through the game where the Shovel Man is chasing me. I go through a door where there are no hiding spots so he should just come and grab me. Unfortunately, I don’t think he is programmed to go into that area because I sit there for five minutes and he doesn’t bother showing up. The chase music is still playing so he is still after me, but for whatever reason, he will not go into that part of the mansion.

Creeping Terror tries hard to make these chase sequences heart-pounding. There is a stamina meter that only activates when they chase me, but it’s not hard to keep ahead of them. There is also the flashlight on my cell phone that could be problematic. The battery drains over the course of my journey but instant refills are scattered everywhere.

The music and sound effects don’t really pull their weight in attempting to make this a creepy experience. Mostly I’m just hearing Arisa’s footsteps loudly blaring through every hallway and bedroom. Early on the music is unsettling but it quickly becomes background noise that is easily ignored. The backstory of this mansion I discover through scattered documents is predictable and something I’m sure we have all seen over and over again.

What’s missing here, the one thing that could make this a worthwhile title, is adjustable difficulty. It’s too easy and there is no unlockable hard mode I can find. I clear my first run with a 91% collection rate in less than three hours. I’m not sure what I miss but I know exactly where I’ll find it should I ever bother another playthrough. Whatever it is must not be too important because I end with what seems to be the best ending on my initial run. With four unlockable endings, there is some replay value though I would argue the primary gameplay isn’t something I value much at all.

Creeping Terror is a short, serviceable title that pays tribute to a bygone era of horror gaming. That sentence is probably the nicest thing I can say about it.