HAL Laboratory games have the uncanny ability to always bring a smile to my face. No matter the title, the developer knows what to do to absolutely charm me right off my feet. Whether I’m inhaling a Waddle-Dee, doing battle with a hippie, or figuring out the object hidden inside a block, HAL titles are able to produce that dumb, goofy, don’t-care-how-unattractive-it-is smile in ways no other games can, and Bye-Bye BoxBoy! is no different. 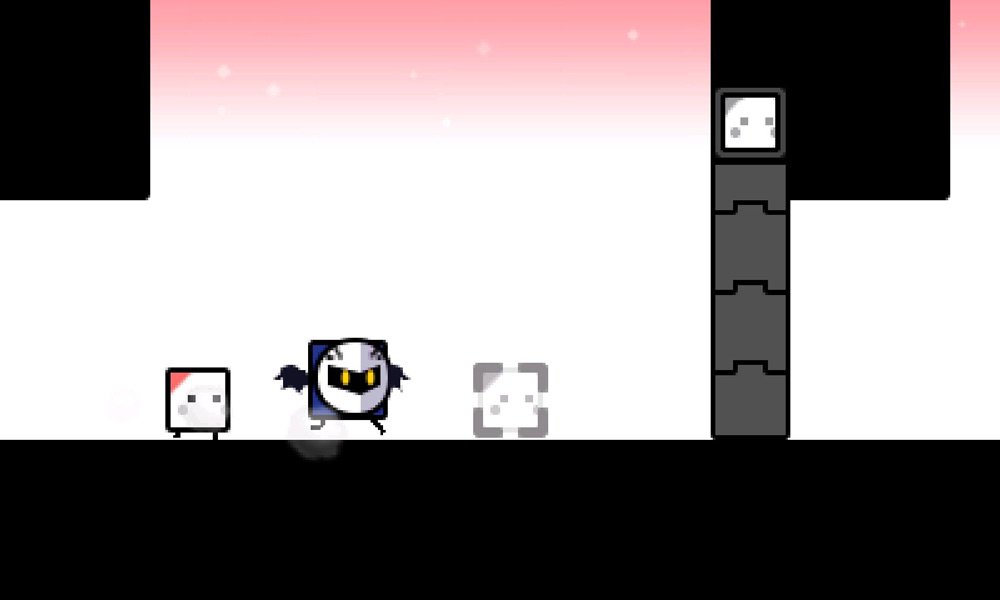 If you’ve played BoxBoy! or BoxBoxBoy!, congratulations, you already know the basics to Bye-Bye BoxBoy! Nothing has changed with the basic formula. You’re still controlling Qbby, a jubilant box with legs, to generate a single string of boxes that help him make his way through the three or four puzzles each level holds. These boxes can act as platforms to guide him safely over spikes or death pits, shields against electricity, or help Qbby reach places his stubby little jump can’t.

So long as you remember which button does what, you’ll have no problem mastering Bye-Bye BoxBoy!’s mechanics. I had played through the original game just before downloading this, so it was all second nature to me. While the opening set of puzzles didn’t do anything I hadn’t already seen in BoxBoy!, new hazards like water and wind mix things up, forcing me to pause, think, and create some eclectic chains of boxes in order to proceed.

Those puzzles were entertaining, but what really got me into the game was the Qbabies. Each of the first three planets house one of these little box kids in dire need of a good rescuing. Qbby saves them in a series of escort mission levels that, like every other level in the game, are short, sweet, and simple to grasp. As he proceeds, the Qbaby will either follow directly behind or be separated below him, requiring Qbby to drop down the appropriate box shape for them to proceed.

Once the Qbabies are safe and sound, they grant new abilities. These skills, which allow Qbby to create boxes that rocket upward, blow up parts of the map, warp him past obstacles, and make a chain he can snake around the course, are fun to experiment with and really elevate the game. It just sucks the use of these power-ups is extremely limited, only accessible in a handful of puzzles. They never overstay their welcome, but I also don’t believe I saw the full potential for any of them in their brief appearance. As was my experience with BoxBoy!, Bye-Bye BoxBoy! is very easy and I was never really challenged until accessing the bonus worlds. Even collecting all of the optional crowns in each level, something you must do before you generate a certain number of boxes, was a cinch.

Outside of the journey, you can use earned coins to purchase new costumes, music, challenges, and comics, the last of which I found to be downright adorable. If you own either of the previous games, some of the costumes collected in those will transfer over including the incredibly useful bunny ears. You can also use Kirby series amiibo, or Kirby characters from the Smash line, to unlock cool-looking color costumes modeled after the pink puff and friends. The amiibo screen also has a slot for the Qbby figure which I hope is an indication that we’ll be seeing it here in the west and not simply something they forgot to remove in translation.

Bye-Bye BoxBoy! is being billed as the last of the BoxBoy! trilogy and if this is where things truly end I think that’s for the better. Qbby is great and this monochrome world is wonderful, but I feel as though its basic puzzle formula is on the cusp of getting stale. If we do see more of this boxed boy, I hope his next adventure is something more substantial.