I’m not sure when it happened, but we’ve now fully moved away from the type of Japanese role-playing game we loved for three or four console generations.

What happened? Did we change? Did we stop liking this kind of game? Maybe we can blame that stretch of nearly-constant complaints of tired tropes and linear storylines there toward the end of it all. Maybe game makers just got tired of making these kinds of games.

Now we have RPGs that seem to go out of their way to avoid anything that would remind us of these games we used to love. But what’s funny to me is that the more they seem to try to innovate, the less gamers seem to like them.

Me? I never became tired of what we would call an old-school RPG. In fact, I’ve been waiting for someone to make another.

Bravely Default is exactly that: an old-school RPG.

The four crystals of the world have mysteriously failed, and now everything is out of balance and falling apart. Literally: Hero Tiz Arrior watches as his hometown suddenly crumbles before him, falling into the earth. Agnés Oblige feels personally responsible as the Wind Vestal — her life’s work is to protect and tend to the wind crystal, which has since frozen up, causing the world’s wind to stop blowing. Edea Lee, daughter of the head of the Duchy, was raised to believe that Crystalism is wrong, but has a sudden change of heart. And a man named Ringabel has no memory of his past, but possesses a journal that seems to know the future.

These four come together as the heroes of Bravely Default, working together to revive the crystals that have been engulfed in dark energy.

Bravely Default has a bit of Final Fantasy flavor, and is said to be a spiritual successor of Final Fantasy: The 4 Heroes of Light, but I suspect for most it will just be a really nice standalone 3DS RPG. Outside some light references (Cait Sith, Phoenix Down potions, etc.), Bravely Default is its own game, set in its own world, with a feel all its own. For me, although some parts are a bit familiar, it’s a breath of fresh air overall. 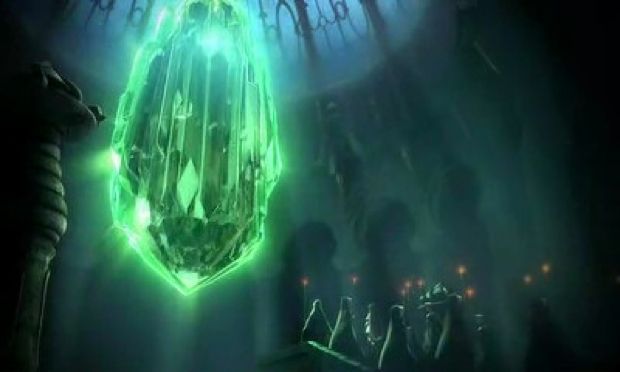 Developers Silicon Studio fully embraced classic turn-based role-playing for the game (read: random encounters, hit points, healing items, and tons of dungeons to crawl), but also added a few twists with a job system and a deep turn-jumping mechanic. The game gets its name from this turn system.

At the beginning of your turn, you can act as usual, inputting your preferred command, or you can Default, which has you blocking and storing that turn for later use. You can save up three of these Defaults, and then use them all at once if you wish, pummeling your enemies with known weaknesses. All of your allies can do this, but you have to keep in mind that your enemies can do the same.

If you’re feeling lucky, you can try to Brave several times from the get-go, which has you taking an advance on future turns. But this means that you’re stuck for the next several turns having to stand there and take hits. I often liked risking it all by Braving all four party members to their max at the beginning of an encounter, but I can’t tell you how many times I paid the price for that risk after unsuccessfully taking the enemy out on that first round of turns. This gamble makes for a pretty fun change-up on the standard turn-based battle formula, adding more strategy. 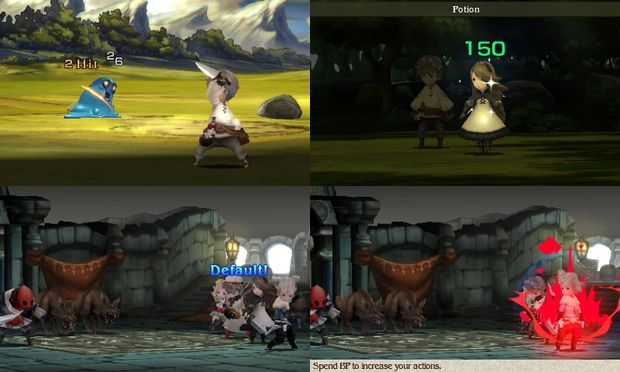 The job system will be familiar to those who played some of the older Final Fantasy series games. It lets you freely assign class types to each of your four party members, and the job points earned from each battle are applied to the equipped class type to level them up, adding new abilities and attacks along the way. You’re free to mix and match after leveling a few jobs up, which lets you pair, say, a white mage’s healing abilities with a warrior’s strength and attack ability. Along the way you’ll also earn support abilities that can be equipped on top of these primary and secondary jobs, giving ample room for customization.

Put the job and Brave/Default system together and you have one of the most deep and enjoyable battle systems I’ve used in a long time. Now that I’m so used to it, it’s going to be hard to start another JRPG knowing that I can’t sneak in a few turns by Braving.

The gameplay is a loop of story progression, overworld travel, dungeon exploration, and an epic boss battle, just as you’d expect in any classic JRPG. It’s all about the journey here, though, so going in with an understanding that you’re not going to find any groundbreaking gameplay systems or storytelling methods is recommended. 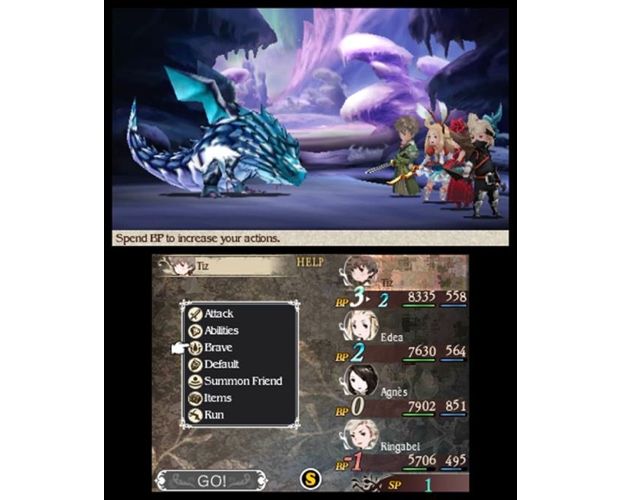 I found that my enjoyment came from the smaller details. Of course, seeing how the story unfolded and meeting new characters kept things moving along nicely for me, but I got just as much out of taking on optional quests to earn new job types, or exploring the flexibility of the battle system when up against big bosses. Heck, working to get a new job so that I could try on the various job costumes alone was enough to keep me going.

While it has next to nothing to do with gameplay, I love that each character’s job class is represented by adorable outfits that are shown not only in battle, but also in the world map and all of the in-engine cutscenes. I’m quite fond of the large hats that many of the costumes feature, whether it be Agnés’ summery mage hats, Tiz’s merchant top hat, or how all of the big hats seem to fit around Ringabel’s ridiculous pompadour.

In fact, the whole game is just as charming as these silly hats are. Everything from the various costumes to the overworld backdrops are bright, colorful, and imaginative. The musical score is a non-stop delight with its strong melodic themes, which range from serene overworld movements to rocking battle grooves. The hand-drawn artwork up against 3D set pieces gives the game a storybook look, and sliding the 3D slider upwards makes it more like a pop-up storybook. You can’t help but be charmed by this game’s visuals. 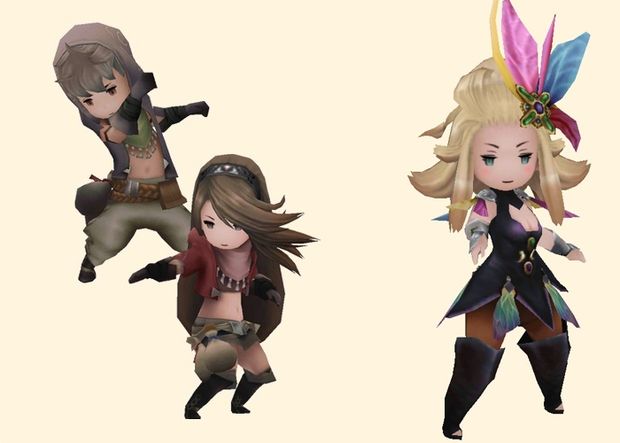 The main cast is compelling enough to hold up the story just fine, but the addition of a huge and varied supporting cast makes it that much more lively. For both the main cast and supporters, dialogue work is great, and the vocal performances are mostly good, though some of the voices can wear on you after awhile. My only real hangup is that the voice performances are quite slow, making dialogue-heavy sequences feel a bit stretched out.

Bravely Default has some interesting social features that make good use of Nintendo 3DS’s connectivity. A StreetPass will earn you an ally in battle that you can summon at any time, even during boss fights. You’re able to summon them as a one-time attack, with their usefulness determined by their level. If no one is around, the game will let you send out an open invitation to other online players, giving you a few to call upon during play. And if you’re completely friendless and alone, there’s even a Friend-Bot.

A town-rebuilding mini game has you recruiting workers via StreetPass. A town named Norende is annihilated early on in the game, and you’ll use these recruited workers to help rebuild the town’s shops and homes, with you serving as a manager, periodically checking in while you go through the main quest. Each project has a time requirement tied to it, so the more workers you recruit, the more you’ll get done. Successfully rebuilding a business earns you bonus items as well as quick shopping privileges that really help out when you find yourself in the depths of the game’s many dungeons.

Bravely Default has to be one of the most convenient and thoughtful RPGs I’ve ever played when it comes to settings and preferences. Aside from the standard sound and message settings, you’re free to change difficulty and even encounter rates at any time. At first, it kind of feels like cheating to turn off encounters completely when you’re low on resources while lost in the deepest dungeons, but you really appreciate the feature when you need it most. What’s nice is that you can also turn the encounter rate even higher than normal to work up your levels or gain more money.

I loved that you can fast-forward through battles by mashing the right d-pad button. You can use the d-pad to set your preferred speed, toggling between normal, 2x and 4x speeds. It is pretty difficult to keep track of the action at top speed, mind you.

Even the equipment system has some nice convenience features. With Bravely Default‘s many job classes and weapon types, getting your loadouts just right can be a bit of work. An auto-optimization does the work quickly, but if you want to dig down deeper, an effectiveness rating system lets you see at a glance what might work best for your characters while shopping and equipping.

Square Enix did find a way to work in one type of microtransaction for Bravely Default, but I’m glad to say that its inclusion does not harm the experience in any way. While simply leaving your 3DS on earns you an SP drink that will let you temporarily freeze time in battles to earn some extra hits, you’re also able to purchase these with real money.

Look, the story and its progression aren’t going to blow you away. You’re likely familiar enough with these kinds of stories to know that you’re going to see some repetition when it comes your quests and how the story unfolds. While there are some pretty nice plot twists and more than a few surprises, at its core you’re still working your way across an overworld map to find another dungeon to look for a boss to beat. And yes, you’ve done this before. But, again, this is a classic JRPG at heart, and it makes no apologies for that. And I love it for that. 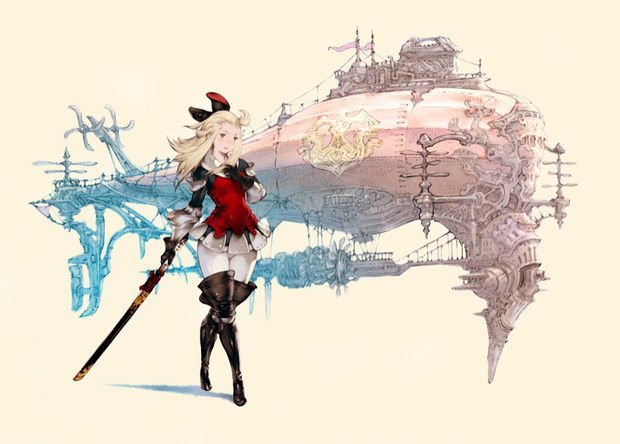 And the new stuff will likely hush any grumbles on predictable storylines or tired RPG tropes. The Brave/Default battle system is flexible and powerful, and it’ll reward those that are willing to experiment a bit. The job system is what really makes this game, though. With its nearly endless combinations of skills and attacks from two dozen job classes, battles never get old as they let you play them exactly how you’d like.

Bravely Default gave me an experience that seemed to put me right back in my bedroom in the middle 1990s, where I’d sit in front of a small Hitachi television set and play the day away with a Super Nintendo controller in hand, so engrossed that I’d forget to eat. It harkens back to a time where we were all in love 16-bit Japanese role-playing games, and couldn’t get enough of them.

If you fondly remember those days, you’ll adore Bravely Default.

And if you like JRPGs and own a 3DS, Bravely Default is easily one of the best available for the system.