He’s gonna take you back to the past…

For years, James “Angry Video Game Nerd” Rolfe has suffered the worst that retro gaming could toss at him for the sake of your amusement. Why does he do it? Is he a masochist? Does the rage that burns inside with every sudden death and game-breaking bug fill him with purpose? Why does the pain give him so much power?

To know the Nerd, you have to become the Nerd. You can’t just film yourself playing any ol’ NES game, spout a few curse words, post the poorly edited footage onto YouTube, then call it a day. It’s not that simple. No, we must dive into the deepest corners of his psyche.

There was once a Z-grade movie of sinister renown called MANOS: The Hands of Fate, which was recently translated into videogame form by FreakZone Games. AVGN show partner ScrewAttack knew that the only way to do a Nerd game justice would be to assign development to a team with experience making palatable the most unpalatable of media dreck. Only by folding pain over pleasure could we truly begin to understand. 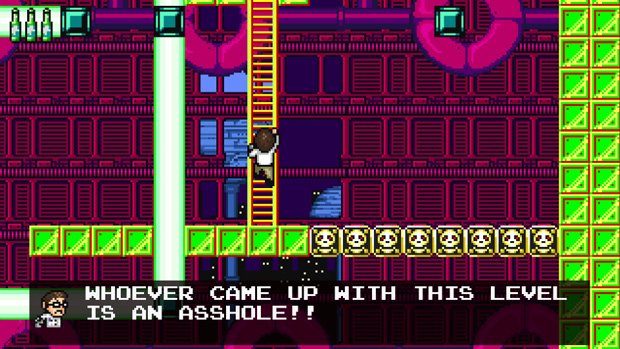 The games that the Nerd typically plays fall under one of three categories: otherwise decent games that feature relentless difficulty, average games with a number of very curious or backwards design choices, and outright festering ass. The last group is his main claim to fame, but for an official Nerd game to work, it would have to draw inspiration from all three categories while at the same time being enjoyable enough to play over prolonged periods.

In other words, FreakZone had to take shit and simultaneously make it not shit. Quite the paradox, but one that FreakZone achieved quite handily.

Long-time Nerd fans will note many nods and Easter eggs to the show’s history in everything from the enemies and items to the obstacles and backgrounds. You consume Rolling Rock to refill health and acquire tokens to summon the Glitch Gremlin or Super Mecha Death Christ. You fly atop the board from Silver Surfer, go toe-to-toe with Dr. Jekyll and Mr. Hyde, and find Shit Pickle hiding in various locations. Then there’s the final stage, a foul monument to one of the Nerd’s most despised game companies.

Several classic Nintendo games are also paid tribute. In the introductory level, you get instructed by Naggi, the green-hued cousin of Ocarina of Time‘s Navi, much to the Nerd’s displeasure. The disappearing blocks from Mega Man and the giant goblin heads from Air Man’s stage in Mega Man 2 feature prominently, as does Doom‘s Cacodemon, remade out of feces and appropriately dubbed “Cacademon.” Even FreakZone’s own MANOS is acknowledged with a boss battle pulled straight from that title.

But what really gives Adventures the AVGN touch is the running commentary. Every so often, the Nerd will make some kind of rant or observation, although the fact that it’s text-based makes it difficult to read during particularly harrowing platforming segments. Whenever you die, the Nerd will spout one of his famous curse-laden analogies (e.g. “This game is rotten fungus coming out of a badger’s sphincter!”) with keywords randomly generated from a pool of submissions from the game’s Facebook page. The current pool isn’t all that big, thus many phrases are repeated; perhaps ScrewAttack will continue to update the game with expanded word banks. 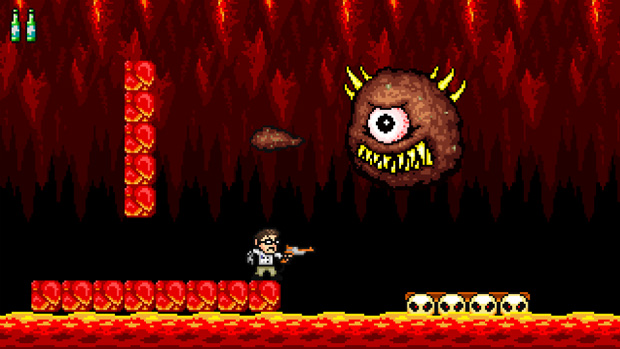 All the references and potty humor in the world wouldn’t be enough if the core game wasn’t compelling. Thankfully, there is a solid quest beneath the surface dressing that even those completely unfamiliar with the Nerd’s exploits would be able to enjoy.

If you happened to have played MANOS, you’ll notice that Adventures feels like an extension of that, with many shared elements and environmental hazards — I wouldn’t consider that a knock against this game, though. There’s a classic “Nintendo hard” degree of challenge, but it’s tempered by very solid controls and enough checkpoints and beer bottles to carry you towards the boss. Oh, and it’s got a pretty bangin’ soundtrack to keep your fighting spirit high!

You begin the game as the Nerd with a multi-directional NES Zapper for a weapon, and careful searching will lead you to three additional party members — Guitar Guy, who can run fast and shoot wave beams through walls; Mike, with a super high jump and the ability to spot destructible walls and invisible platforms; and Bullshit Man, who can double jump and lob extra powerful lumps of poo. Only by swapping characters on the fly and using their abilities can you reach formerly inaccessible areas filled with 1-ups, health, and weapon upgrades. You may even spot a few NPC cameos, like brentalfloss, Egoraptor, and our very own Jim Sterling and Mr. Destructoid! 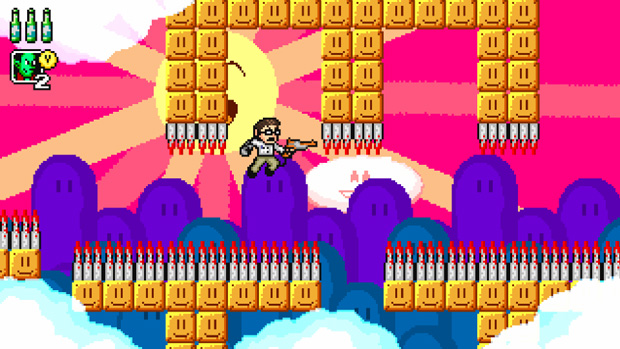 Every obstacle in the game operates on very simple patterns that can be observed from a distance before being approached. Spikes that emerge from the floor? Fire pillars or laser turrets that trigger at regular intervals? Maces that circle the bricks they are chained to? Just count the seconds and time your progress. Your mistakes are entirely your own.

Naturally, the last level throws everything plus the kitchen sink at you at once, but that’s what last levels are supposed to do.

However, there is one persistent obstacle — a skull-faced block that causes instant death upon touching — that caused me great grief. Such blocks appear in clusters and typically blink in and out with the same rhythm as the disappearing blocks. They are everywhere, in every single level without fail, yet they always feel completely out of place. I mean, death blocks that kill you with a mere graze? What’s up with that?

In a way, death blocks are a quick and easy way to bump up a stage’s difficulty without the need to create unique environmental hazards. Sounds rather creatively bereft, no? But if you were the Nerd, wouldn’t such an obstacle become the focus of your rage and frustration, the breaking point after which righteous obscenities start flowing like wine? If the designers’ goal was to put you in the Nerd’s shoes, such an evil element would be necessary to trigger that transformation. 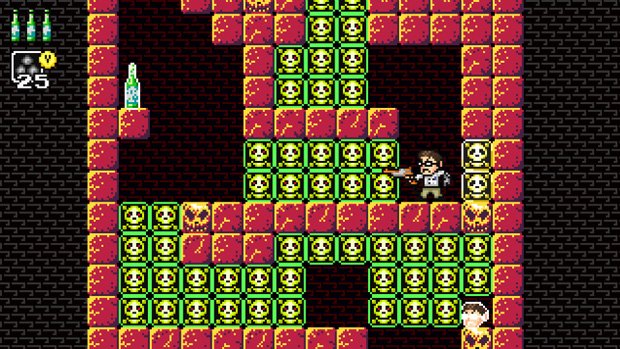 Adventures is no insurmountable wall, but neither is it a welcome wagon. On Normal mode, you are given 30 lives and unlimited continues, which should allow anyone with enough drive to at least make it to the final boss within a couple of hours — whether you can actually beat the final boss is another matter, the god-modding bastard. Beyond that are even tougher difficulty modes that prevent saving between levels and reduce your amount or health and retries.

As a pseudo NES-era throwback, it nails the careful balance between cruel and inviting. As a tribute to the Nerd, it does a decent job covering his entire career, although repetitive dialog lessens the humorous impact on repeated playthroughs. As an authentic Nerd “experience”… well… your mileage may vary, but I’d like to think it is.

Angry Video Game Nerd Adventures is not a cowa-fucking-piece-of-dog-shit, that’s for certain!