A game where you sort luggage.

A videogame is a thing that asks you to do a series of tasks in order to meet arbitrary goals that were established by someone else. Videogames are things that most of us partake in for “fun,” regardless of how difficult the tasks are. In fact, a lot of people only want to play videogames that present them with tasks that “offer a nice challenge.”

A job is a thing that asks you to do a series of tasks in order to meet arbitrary goals that were established by someone else. Jobs are things that most of us will only do if we get paid, regardless of how easy the tasks are. In fact, a lot of people hate jobs that present them with tasks that “aren’t challenging enough.”

Where does the line between job end and videogame begin? What makes a game, or a job, “nicely challenging?” These are some of the the questions I was left asking myself after my time with Yoot Saito’s Aero Porter. 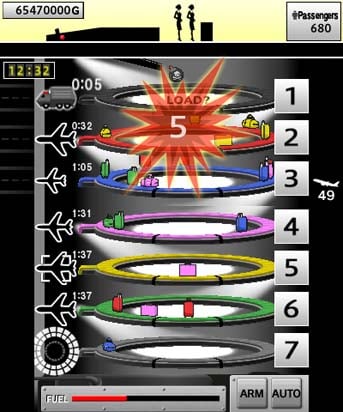 Yoot Saito is most famous for creating the Dreamcast classic Seaman, arguably the strangest game ever made. It is a game where you take care of a fish man. That’s it. Do a marginally good job, and you may have a few interesting conversations with it about existentialism and the possibility that The Beatles weren’t real. Then he’ll leave. Game Over.

Knowing this about Yoot Saito, I went into Aero Porter expecting something surreal. Shame on me for thinking I know what to expect from Yoot Saito. While Aero Porter does delve into a few playfully strange moments, it’s a fairly straightforward game about sorting luggage. What’s strange about the game is that it’s compelling. Sorting luggage sounds boring as hell. You’d have to pay me to do it in real life. In videogame form, it’s something that I’m paying Yoot Saito and Level-5 for the permission to do.

Part of that comes from how the game starts off so deceptively simple, and how Yoot (or as he’s known in the game, Bob) treats you as an employee. He makes it all sound so easy, and is so disappointed with you when you screw up. That kind of management makes you really want to do better, which leads you to keep playing even when things get tough.

Make no mistake about it, this game gets really tough. You start with three conveyor belts and three different types of colored bags. The bags continually spin on the conveyor belts until you flip a switch to send the bags onto their corresponding flights. By lowering or raising connecting bridges between the belts, you can send different  bags to different belts. Get all the yellow bags on the yellow belt, flip the switch to get the bags on the flight, and you’re doing your job right. Get too many of the wrong colored bags on the wrong flights, or fail to get all the bags on the plane before take off, and you’re going to have some very disappointed customers (and a Yoot/Bob Saito) on your hands. 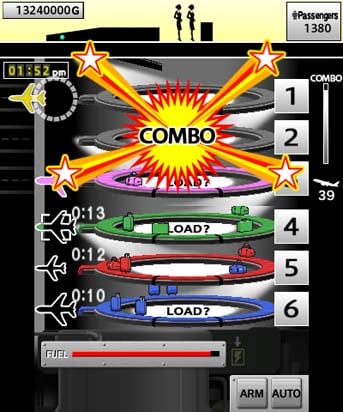 The catch is, if you activate the bridge to raise or lower a bag from one belt to another, you activate all the raising or lowering bridges in the whole baggage department, which could cause you to raise/lower a bag onto another belt that you didn’t intend to move. This forces you to simultaneously focus on all the belts in the department at once, while assessing where each bag is, and where you want to move them. As your airport continues to expand (thanks to your super profitably baggage handling skills), you’ll eventually end up managing seven conveyor belts at once. That’s more than twice as much work as you started with. Anyone who’s ever been “that guy” at a job who’s willing to go the extra mile for the same pay knows how typical this workplace scenario can be.

On top of all that, you’ll also have to manage your fuel levels. Run out of fuel and your belts will start running at a snails pace, making it almost impossible to get anything done. You’ll have to buy more fuel, and then manually lower the fuel all the way down to the bottom of the screen into the engine room (but don’t accidentally lower any bags into the engine room too, you moron!)

There are a few ways to make your job easier though. Score enough combos and you’ll gain better equipment that’ll allow you to shut the lights down (to save fuel), stop incoming baggage from unloading for a few seconds, adjust the speed of your belts, and make your belt bridges raise/lower at a faster pace. The may sound like small details, but they can mean the difference between a flight full of happy customers, or a plane filled with incorrect, sometimes deadly baggage. 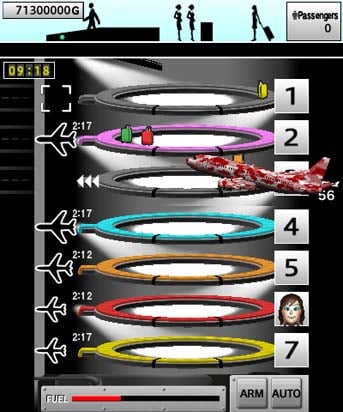 This deadly baggage comes into play during Aero Porter’s “specialty” situations. These events can happen at any time, and do well to simulate the kinds of unforeseeable problems that can happen in even the most serene work environments. Terrorists will occasionally throw explosive luggage into the mix. You’ll have to be sure to get the bomb sorted onto the disposal truck (and not a plane, you idiot!) if you want to keep your airport’s reputation (and passengers) alive.

You’ll also get ball shaped VIP luggage that needs to be rolled (via motion controls) around the belts to get it onto the right flight, and bags that belong to high powered politicians that are intentionally mis-colored in order to keep their owners’ identity a secret. You’ll have to take a close look at these bags to to see what colored tags they carry. Their tags aren’t visible from every angle, which forces you to narrow your focus to just these bags for at least a few seconds. In a game that’s all about taking in information from both 3DS screen simultaneously at all times, it’s cruel task indeed, but necessary if you want to keep the president of some random nation (and Yoot/Bob) happy.

The beauty of Aero Porter is in how it forces the player to make these kinds of on-the-fly judgement calls while simultaneously tending to the craft of baggage handling. When those bombs or VIP bags show up, you have to make them top priority, which may mean ignoring other flights and bags for a while, or even intentionally putting the wrong baggage on the wrong flight just to get the plane out of the port. If you try to play Aero Porter like it’s only a puzzle game by sticking strictly to the goal of doing everything perfectly, you will never truly master it. Only those who are willing to make tough, potentially damaging management decisions while simultaneously keeping track of every belt and every flight time and your fuel gauge will become a master baggage handlers. 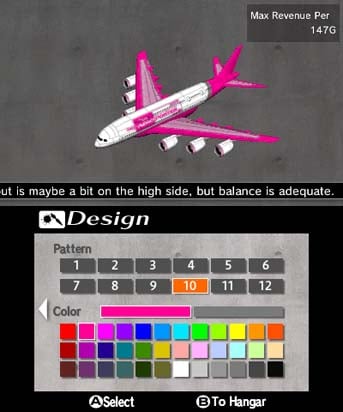 Aero Porter is a brilliant amalgamation of the puzzle game and the business management simulator, though it’s not for the faint of heart. The amount of information the game asks you to juggle at once will be too much for a lot of people. It took me a long time to get past the third day of work, though that level of tough-but-fair challenge only worked to enhance my level of excitement about pushing forward.

My only real issue with the game is that it runs out of new rewards fairly quickly. After you’ve maxed out your airport to “Space port” size and gained all the new equipment available, your only in-game motivator for continued play is the opportunity to unlock a variety of new customizable planes for your personal hanger. I’m sure that aviation enthusiasts will find that compelling. The rest of you may drop out.

That deficiency aside, Aero Porter is a definitely worth the time of anyone looking to have both their decision making skills and color sorting technique pushed to their limits.