I don’t love it when you get small, Jake

Adventure Time is currently my favorite show on television. It offers the same kind of nonchalant surrealism, iconic but expressive characters, and the simple delivery of complex themes that got me interested in videogames in the first place. The potential for Adventure Time to make the jump from animated series to engrossing videogame is staggering. Sadly, that potential has been largely squandered up until this point.

When series creator Pendelton Ward announced that he was working with WayForward, one of the most talented and resourceful small developers in the industry, on creating an Adventure Time game for the DS and 3DS, my expectations immediately shot sky high. Unbelievably, those expectations were largely met. At times, they were even exceeded. Too bad it’s all over so soon. 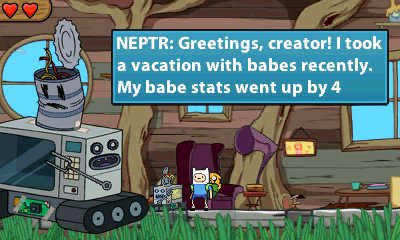 Adventure Time: HIK!WYSOG?! starts with a nightmare where an owl kicks your ass. From there, things quickly transition to a conversation between a boy named Finn, his shape-changing dog Jake, and a little Game Boy-esque robot named BMO.

The robot encourages the boy and his dog to destroy every tea cup in the basement. Next, the two protagonists talk to another robot — one that looks like a talking microwave — about stat building (of course), before leaving the house. Just as they step outside, an old flying man steals their garbage. The heroes deem that behavior to be unethical, so they decide to go to the old man’s house and beat him up.

To Adventure Time fans, all of this will seem perfectly normal, and only works as a teaser for what’s to come. To those who’ve never seen the show, it’s a perfect primer for the brazenly bizarre, effortlessly charming world of Adventure Time.

Like some of the best episodes of the show, the game’s storyline is fairly barebones, but the writing is excellent. I laughed out loud and not just because I’m a fan of the show. In fact, I’d wager that a lot of the charm and humor in the game may have a greater effect on people who aren’t already familiar with Adventure Time, as the concepts and characters will feel more fresh. If you’re a fan of the style found in games like Katamari, Scott Pilgrim, Earthbound, Animal Crossing, or other sweet and strange videogame series, chances are you’ll feel right at home.

The similarities to Scott Pilgrim go deeper than that. Paul Robertson, one of the head animators on Scott Pilgrim vs. the World: The Game, worked on the art for Adventure Time: HIKWYSOG. If you’re as big a fan of Mr. Robertson’s work as I am, you’ll pick up on his style right away, as it’s quite prevalent during some of the bigger, more beautiful enemy graphics. Mr. Robertson was joined by Joakim “Konjak” Sandberg, one of the best sprite artists in the business, as well as Shiho Tsutsuji, a 10+ year veteran in the pixel art field, whose past credits include the Fire Emblem series and just about every 2D Kirby game of the past decade. All of these artists under one roof makes for one of the best-looking sprite-based games in recent memory. The animation here is more fluid and expressive than just about anything you might find on television, including Adventure Time. 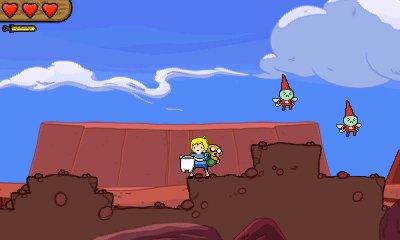 The sound design and score on the game are equally impressive. Sound effects and voice samples from the show’s excellent cast are peppered throughout, which comes as no surprise. The quality of the original songs and arrangements by Jake “Virt” Kaufman of the WayForward sound team are another subject entirely. They came out of left field, and totally blew my mind. There are a shocking amount of songs that feature full vocals, from the opening theme, to the candy graveyard theme (complete with creepy ladies whispering “death” in your ears), to a new song written specifically for a 1,000-year-old vampire queen, and many more.

These songs don’t mimic the exact songwriting style you’d find in the show, but that’s a good thing. They stay true to the feel of the source material while giving even diehard Adventure Time fans something that they’ve never experienced before. The ending theme includes the lyrics “our friendship is stronger than any butt.” I shouldn’t need to tell you that you’ve just witnessed greatness.

While the writing, graphics, and sound are all near perfect, the actual game design is more of a mixed bag. The game takes inspiration from Zelda II, offering a 2D, top-down RPG overworld and side scrolling town/dungeon/set piece action sequences. The pacing is far more dense than Zelda II, with important locations much closer together, faster-paced combat, and fewer instances of unavoidable random battles in Ooo to slow you down. 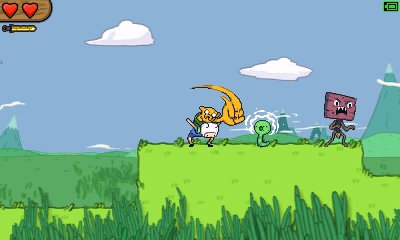 You’ll need to have a healthy sense of exploration to get through the game, which requires searching both the overworld and the sidescrolling areas for new items and abilities in order to proceed. The structure is generally fetch-quest focused, which some may qualify as “padding,” but if you love being in the game’s world as much as I did, you’ll take any excuse to spend more time with Peppermint Butler or the Earl of Lemongrab, even if it means searching every corner of Ooo looking for Wildberry Princess’s diary.

Thankfully, you’ll need more than passive item collecting to pass through some of the game’s various gates. There is also a fair amount of ability collection for both Jake and Finn, both of whom are controlled simultaneously. (Jake’s actions are mapped to X and R, while Finn’s actions are controlled with the remainder of the inputs.)

Jake starts off with nothing more than a slow, weak, long-distance punch (he’s clearly feeling lazy), but through various tomes of knowledge and personal experience, he learns to float in the air, Princess Peach style, to form an ear shield that protects from projectile attacks and repels harsh winds. He can also learns to turn into a cute little boat, and much more. Finn’s abilities are more direct, generally focused on swordplay. He starts with a slide attack, ground pound, three-hit-punch combo, and an uppercut, but over the course of the game, he acquires a sword and multiple ways to make use of it. 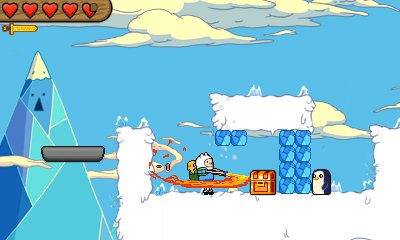 To further mix things up, Finn and Jake can grab various pick-ups from enemies and treasure chests. Other than the well-hidden Wizard Stars which are generally used for health recovery, temporary stat enhancement, and special moves. Most of these items have links to the show, like the frozen business man’s brief case, the crystal apple, beauteous wings, everything burrito, tiger hand, etc. Quite a few of them are rare, which makes hunting for them all the more fun. Only truly dedicated explorers find The Enchiridion (note: I still haven’t found it myself). To add a further sense of discovery, there is an item-mixing system that can lead to unexpected results. Mix salt with a milkshake and chug it down — you’ll begin to spout ice shurikens straight out of The Chamber of Frozen Blades.

It’s a shame that this aspect of the game wasn’t more fully integrated into the overall design. You can go the whole game without mixing a single item, or bothering with any non-quest oriented pick-ups. That speaks to my main issue with the game — it doesn’t ask enough of the player. Most enemies are fairly passive beasts. They have distinct and expressive attack patterns, but are all fairly easy to defeat or avoid. All the game’s bosses have easy patterns to learn too. Other than the last two fights, experienced players will likely beat them all on the first try. 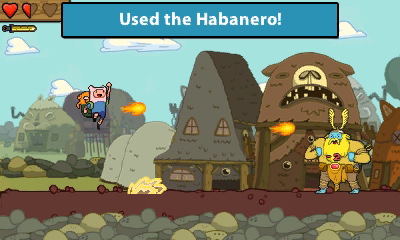 Worse, the game is over way too soon. I didn’t up my speed stats — which increase your overworld and side-scrolling area walking speed — until close to the end of the game, and I did a fair amount of extra running around and exploring (though there are still plenty of secrets I’ve yet to see), but I still beat the game in less than six hours.

Although there is a New Game+ option, it’s largely the same experience. In both difficulty and length, Adventure Time: HIKWYSOG?! feels like an extended first level of a much larger, potentially more challenging game. It’s better that WayForward and D3 used their resources to create a short but expertly crafted game than to use the same budget to make a larger but more watered-down experience, but that doesn’t change that fact that most consumers will expect a larger game for the retail asking price.

As for the collector’s edition stuff, it’s fairly barebones, but still worth owning for hardcore fans of the show. Like the game itself, the overworld map and bestiary book are small but made with genuine love of the source material. You also get a plastic stylus in the shape of Finn’s sword, which will likely be most appealing to those with smaller hands. My favorite bit is the Enchiridion-shaped metal case the package comes in. It’s extremely well put together, and gives even an old jerk like me a sense of wonder. 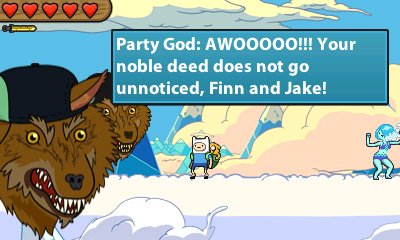 There was a time when a game like Adventure Time: HIK!WYSOG?! would qualify as a near perfect game, length and all. Ironically, WayForward’s own excellent digital offering Mighty Switch Force has caused that standard to change. The game feels more like a top class, $15 download than retail title. That said, it’s still an incredibly well-crafted game, and easily the best piece of self-contained Adventure Time artwork I’ve seen yet.

With 50+ characters from seasons 1-3 of the show in appearance, it feels like more than a love letter to fans. It’s closer to an expertly blended Megazord of everything that makes the show great. If you are a huge fan of Adventure Time, and/or are a less experienced videogame player, feel free to tack two points on to the score.