I remember my first episode of Adventure Time. It randomly came on the TV one day and I had no idea what it was — but I couldn’t stop watching. There was something about the show that kept my eyes glued to the screen, watching best pals Finn and Jake battle the “evil” Ice King to save princesses from all across the Land of Ooo.

Years later and I’ve seen every episode of the show, and I still can’t predict what will happen on any given week, or what new endearing character I might meet. To me, that’s the mark of something special.

Sadly, the new Adventure Time 3DS game is the opposite of everything the show stands for. 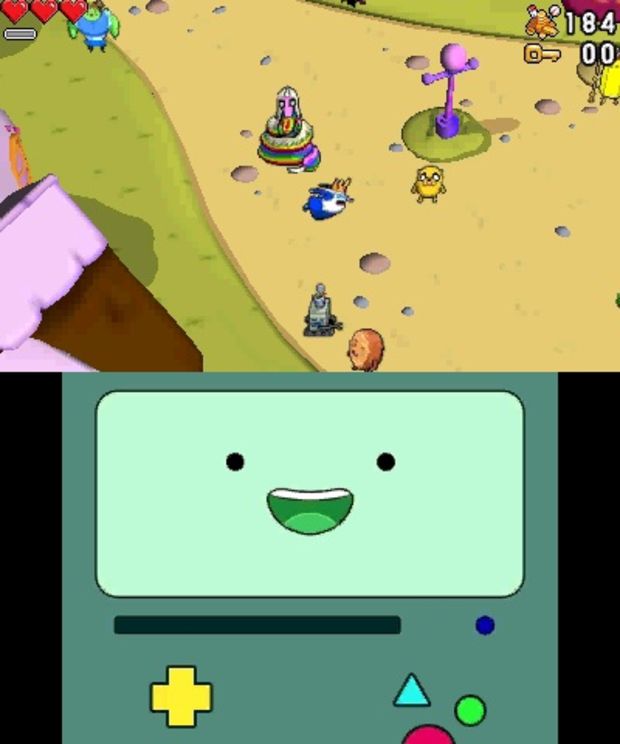 As the name might imply, Explore the Dungeon is predictably a dungeon crawler through and through, as players are tasked with completing a randomly generated 100-floor labyrinth. There’s no real plot to speak of (and that’s fine), as Princess Bubblegum wants you to get to the bottom of why prisoners are escaping from said dungeon. From start to finish as either Finn, Jake, Marceline, or Cinnamon Bun (as well as a few other secret characters), you’ll basically just battle your way to the end in the exact same way — but you most likely won’t make it very far.

On the 3DS, the presentation is lazy, lackluster, and shameful. As a fan of retro games, I’m actually quite fond of an 8- or 16-bit style every so often, if it’s done right. But here, it’s clearly a placeholder for a rush-job, as the cutscenes look like they were created in Microsoft Paint, and the animation is awful all around. It doesn’t help that the voice acting sounds tinny on the 3DS (like it was recorded in a parking garage) and the writing is devoid of any charm or wit whatsoever.

But this lack of effort pales in comparison to the animation in-game, which renders it borderline unplayable. Simply put, the game is constantly chugging along at a snail’s pace, with a perpetual framerate problem. There’s no run button by default to make it better, so it feels like the entire game is running in slow motion. I honestly have no idea how the 3DS version was allowed to be released in its current condition.

Gameplay isn’t much better, unfortunately. It’s as bare-bones as you can get. You’ll have your standard attack button at your disposal (which can be charged), as well as blocking, dodging, sub-weapons, and a super power. The sad part is you won’t need to mix up any of these concepts beyond mashing your normal attacks — the AI is so poorly designed that you can get by without any sort of deviation in strategy.

Although each character has a different playstyle or power (Jake and Marceline can traverse gaps, Finn can equip more items), your choice won’t matter in the end because you can just breeze through the boring dungeons with any of them. While the first few floors start out promising, you’ll quickly realize that each level is a ghost town, with the same few enemies repeating over and over 10 levels at a time until a new theme arises. In lieu of any sort of multiplayer found in other versions, you get a cute BMO on the bottom screen that barely talks. 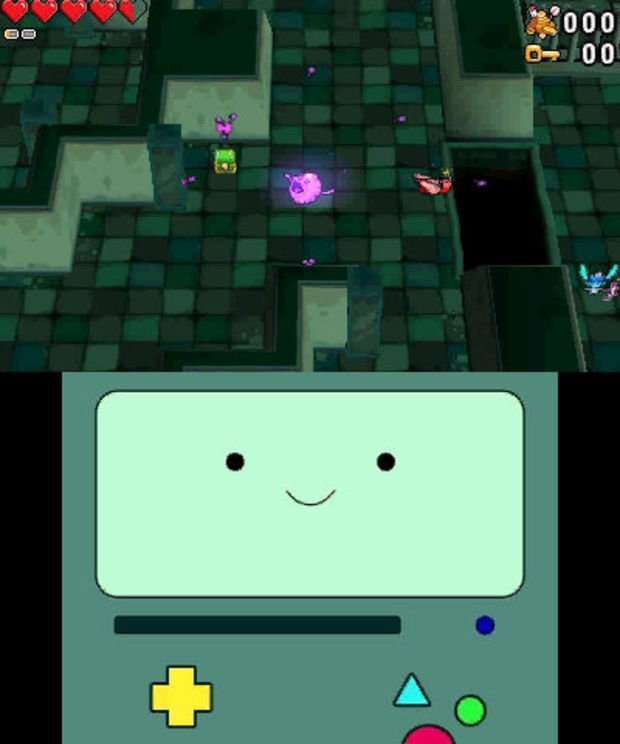 Foes consist of uninspired designs that vaguely resemble characters from the show, and bosses aren’t that much better. The only real value the game has in terms of fan service is at the very end, where it reveals a plot point that is yet to be presented in the show. That’s… literally it. The actual dungeon layouts, which tend to follow the same formula of “the staircase is always on the opposite end from where you start,” are utterly uninteresting. When coupled with the boring enemy designs and the fact that you don’t actually earn experience from killing anything, there’s absolutely no incentive to explore in Explore the Dungeon.

Speaking of experience, you have to “buy” your actual upgrades in town with the gold you acquire from the dungeon. Should you choose to go back up (you’ll get the option every five floors), you better spend all the money you have — because you lose it when you leave the hub world. It’s a design choice that makes no sense whatsoever considering the game is far from “hardcore” in any other aspect. Why limit your ability to develop your character and at least have fun? 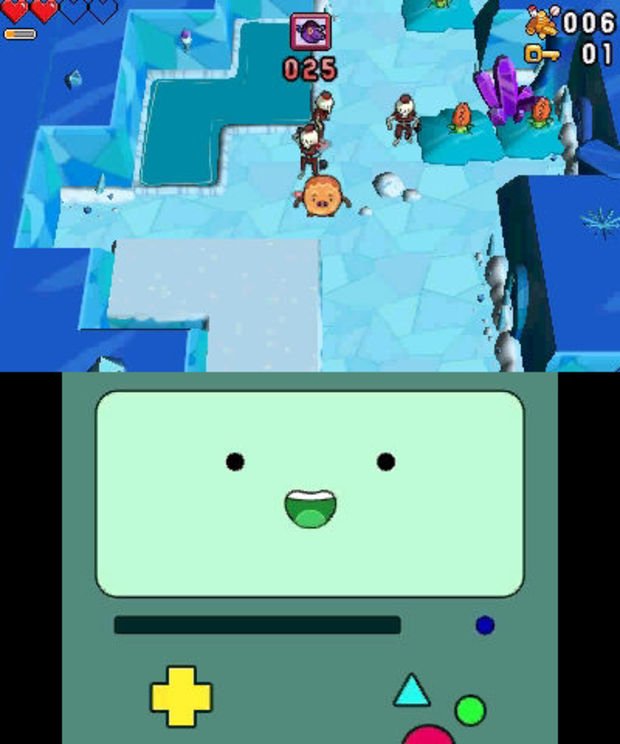 Although this review is based on the 3DS game, I did get a chance to play the console version, and it’s a much better experience in every respect. Not only does the game not suffer the perpetual slowdown problem of its portable cousin, but it’s four players, and generally looks better all around.

There are also a number of other small improvements, like the fact that Lady Rainicorn’s dialog is in Korean — small touches that show more effort. It still has the same dull gameplay as it’s essentially identical in terms of feature parity, but with three other Adventure Time fanatics it could be a good bargain-bin purchase — because it will hit the bin sooner than later.

At some point during the development process of Adventure Time: Explore the Dungeon 3DS, someone should have looked at the current build, and scrapped the project entirely. Whereas Regular Show 3DS was a flawed love letter to retro fans, Explore the Dungeon is a sheet of paper with chicken scratch scrawled on it. It’s the worst game WayForward has put out in years, and yet another example of a wasted licensed game opportunity.