As a big fan of the old school Thundercats, I was pleasantly surprised by how good the new Thundercats series is. Namco Bandai is working on a simple beat ’em up for the DS that ties in with the new series and it’s not that bad.

When I say simple, I really do mean simple. It’s not innovative in the least, instead hitting the bare bones needed to make a decent brawler in order to appease the younger fans of the cartoon, and DS owners alike.

The game follows the plot of the new cartoon series somewhat loosely, and sees you in control of Lion-O at the start of the attack on Thundera by the Lizard army, lead by Mumm-Ra and former ally Grune. You move from left to right where you can perform basic ground and air attacks with your trusty Sword of Omens. Enemies will come in different attack patterns, and you can’t move forward until everyone has been killed.

As you kill enemies, you’ll fill up your Sword of Omens meter which once filled lets you shoot a blast of energy from the sword, instantly killing everything in sight. I like to call this attack the “Ho blast,” as the sword only fires once Lion-O finishes saying Thunder, Thunder, Thunder … Thundercats HO!. No, I’m not sorry for my horrible jokes.

Activating the Ho blast is done by touching the Sword of Omens located on the bottom screen. Surrounding the sword on the touch screen are fellow Thundercats Tygra, Cheetara, Panthro, WilyKat and WilyKit. Once you’ve found your allies through the story, they’ll be able to jump on screen and perform a special move to kill everything on screen. You have to collect Thundercat symbols scattered around levels in order to utilize your ally’s abilities first though. 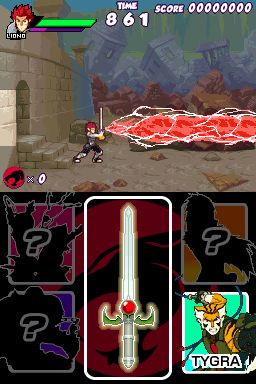 You can also collect Thundrillium crystals scattered in a level which goes to unlocking artwork straight from the show. The voice actors from the series will even have some voice overs in the DS adventure. There will even be a section or two where you can drive the ThunderTank!

That’s about it, really. Your main attacks are pretty basic, and fighting through the hoards of lizards is very easy. The little touches developer Aspect Digital Entertainment put in that calls back to classic beat ’em ups is pretty cute though. You can’t move back left, enemies will drop whole cooked turkeys as health pickups, there’s a score meter up top, an onscreen prompt appears telling you to continue moving right, and there’s even a score tally at the end of each level.

The only thing that can hurt this package is if Namco tries to charge more than $19.99 for it. Honestly I can totally see myself recommending this to my little cousins addicted to their Nintendo handhelds, so long as it’s reasonably priced that is.