Batman’s back (in LEGO form) and he brought his friends along for sequel in LEGO Batman 2: DC Super Heroes. Not just Robin, though. Superman, The Flash, Wonder Woman and Aquaman are among the blocky heroes, and The Joker and Lex Luthor have the villain thing on lock, as always. Last week we got our first hands-on preview with the title, so read on to see how it all … stacks up. 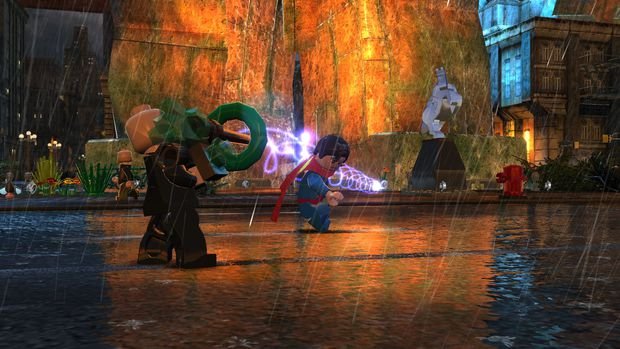 The Joker and Lex Luthor have teamed up to spring all the bad guys in Arkham Asylum with a deconstruction weapon that can tear open the blocks that make the prison. Gotham City’s heroes, Batman and Robin, swoop in for riot control, and they handle the job quite well at first, but it eventually becomes a situation where the Justice League needs to be called in.

The gameplay in LEGO Batman 2 is delightfully simple. I steered a LEGO mini-figure version of Robin in a cooperative session with another attending press member playing as Batman (LEGO Batman 2 supports drop-in/drop-out play for a second player at any time) in the fight against Arkham’s worst, kicking, punching, grabbing and throwing my way through them. A simple combo system lets you string attacks together, but more advanced attacks come from character-specific suits that add new abilities for combat and navigation.

Early on we saw that Batman has a electricity suit that lets him power-up to do special takedowns as well as power up equipment for puzzle solving. I liked Robin’s acrobatic suit, which lets him throw poles into surfaces to swing on and jump from, enabling him to reach higher platforms. The poles can also be used as a baton-like weapon, but it pales in comparison to the suit’s hamster ball ability, which lets Robin roll around to smash baddies and other obstacles. These are just a couple of the many suits available. 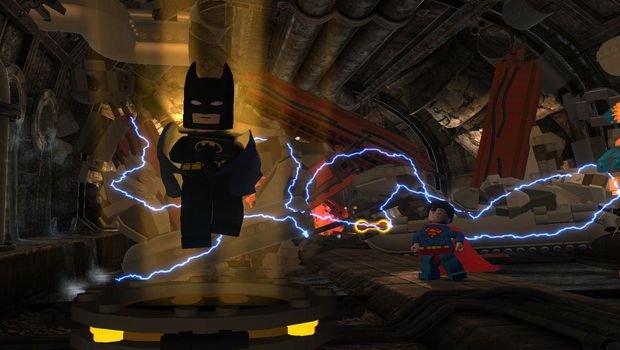 This high level of accessibility combined with some depth in abilities and combat means that you can sit down to play LEGO Batman 2 with a child and you’ll both will have a good time. I certainly did.

I really enjoyed the dynamic presentation of the two-player session. The split-screen isn’t static, and will move around to highlight the action, with the division constantly moving depending on where each player stands. If both players are near each other, there is no split, but as they move apart, the dividing bar will tilt and spin freely, and the camera will zoom in to highlight the action. This makes for a cinematic presentation, making your co-op session look something like an animated movie.

For the first time, all of the LEGO game characters have been fully voiced. The work I saw in a presentation and gameplay was top notch, with Superman and Joker being the most notable. The dialogue is packed with wisecracks and jabs, making for some pretty funny cutscenes. 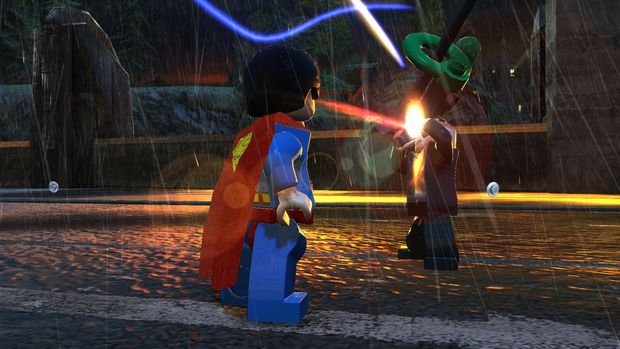 After I played through the demo mission I was able to get a taste of LEGO Batman 2‘s open-world. Set in Gotham City, heroes can explore freely, taking on missions, picking fights and trying out any of the 70 playable characters. We saw all types of weird experiences in this open world, ranging from crazed Batmobile cruising to Wonder Woman riding on the back of a lion. It all came together for me when I saw LEGO Superman take to the skies, cruising over Gotham’s skyscrapers as the Superman theme queued up in the background.

Lego Batman 2: DC Super Heroes will be released later next month for just about every current game platform on the market, save for mobile.