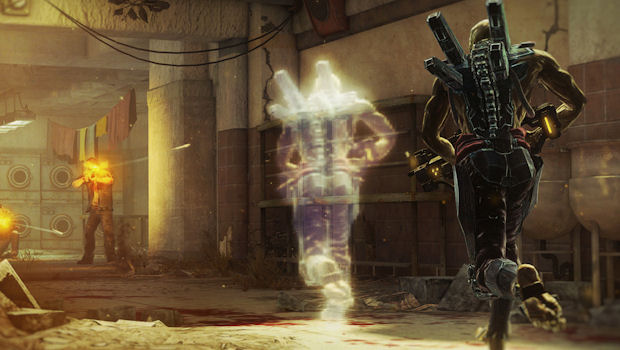 Insomniac has parted its legs and given us a glistening glimpse of Resistance 3‘s multiplayer mode.

The big change is that R3 will actually reduce the amount of players in a match, going from 40+ mayhem to more reserved 16-player matches. The change was made because apparently the game is just more fun on a smaller scale. There will be Human vs. Chimera deathmatch and objective-based modes on maps set around the world.

Resistance 3 will offer a “deep” customization experience, with progression paths that suit a variety of play styles. Whether you’re into heavy assault or support strategies, there are lots of skills for you to spend experience points on. Provided examples of abilities are the Bubble Shield, Ammo Beacon (give ammo to teammates), Radar Beacon (enhance your team’s radar), Doppelganger (projects an image of you nearby to distract enemies) and Dash (an explosive burst of speed to evade enemy attacks).

Players also get to pick a “personal attribute” and a “combat attribute.” These include the power to have leapers bust out from one’s corpse, access extra weapons, and reloading or firing at a faster rate.

A beta is due out later this year. Hopefully more news will be had on that soon.

All I need now is to be told that PlayStation Move will not be included — or at least restricted to its own server — and I am 95% sold on this bitch.