When Bethesda announced Prey during last year’s E3, those who had been following the troubled development of the series were confused.

Some history: the first game was about Tommy Tawodi, a Cherokee mechanic who was abducted by aliens and had to fight his way out of a massive spaceship called the Sphere. The Prey 2 that was being developed back in 2008 was about a futuristic bounty hunter living in a post-Sphere world.

This new game with the same name showed a man waking up, suiting up, and repeating the same day over and over again à la Groundhog Day. Watching the reveal, I wondered if there were any connections to previous games or this was a soft reboot. From the hour I played last week, it turns out that even calling it a reboot is generous. While it’s beyond bizarre that this name is being recycled — I was all-but-told that Arkane Studios had been developing a new sci-fi game and the Prey name came later because “it’s such a good name” — after playing it, I wouldn’t have it any other way.

Note that the video below and my preview are filled with some large spoilers, so if the idea of System Shock 3 with modern controls, alien powers, and inventive ways to circumvent obstacles is enough to sell you, close this now.

After choosing whether you want to be the male or female version of Morgan Yu (this doesn’t seem to change the plot from what I’ve seen so far), you awake in an apartment overlooking San Francisco. This being a first-person game similar to System Shock, I immediately started poring over everything, from emails to spare parts laying on my desk. I even did that thing where you start picking up objects in your house and throwing them at walls like no sane person would ever do. A radio transmission from Morgan’s brother Alex told Morgan to suit up and go up to the helicopter on the rooftop, then thanked her for joining the program. I grabbed my suit and walked out into the apartment hallway, greeted a maintenance woman, and went to the roof.

I boarded the helicopter that would take me to the Yu’s facility. The family has a corporation that’s researching neuromods, which can improve humans by way of injecting material into their eyes. A massive Prey logo was projected onto a building, and an instrumental retrowave-ish song began playing as I watched the Golden Gate bridge pass by. The music had me bangin’ my head, as you can see in the video, and it’s a legitimately fun way to start the game, considering you know that you’re going to end up on some screwed-up space station eventually.

At the facility, Alex greeted me and told me I had some tests to perform. In what feels like a scene taking the piss out of tutorials, three scientists behind a thick window had me participate in inane tests, like picking up small boxes or vaulting over a single wall to press a button. The lead scientist was continually exasperated, and there was some comedic timing when he blurted out comments like “Okay, can someone tell me what’s going on?” as if you’re failing the test in some way, and another scientist reminds him “Sir, the speaker is still on.” Something was obviously awry, but I wasn’t sure as to what. As the head scientist complained about his coffee over and over again, he looked down at his cup as it reverted to its true form, a shadowy headcrab-lookin’ jerk called a Mimic. It drained his life and he became desiccated in seconds as gas filled my chamber, knocking me out. 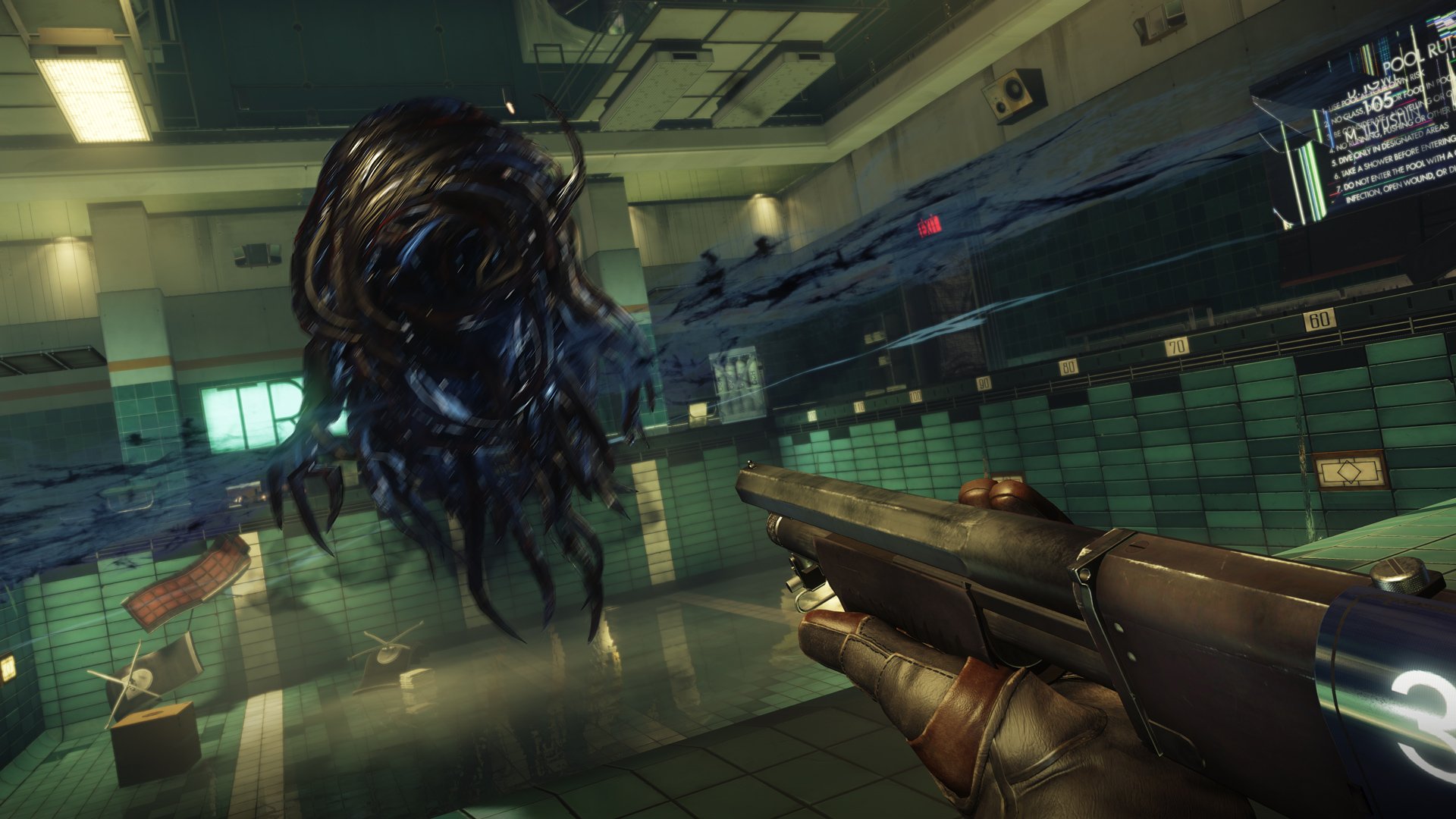 I awoke again in my apartment, on the same day as before, with the same song serving as my alarm. I checked the computer, and there were numerous emails all saying “GET OUT.” I suited up once more, went into the hallway, and found the maintenance woman dead on the floor with a wrench next to her. I picked it up (flipping it up in a little flourish because ya gotta be cool), and started exploring. There was nowhere to go, so I figured I’d smash the window overlooking the city and go down the fire escape. As my wrench shattered the glass, instead of being met with digital winds whipping through my hair, I could now see that the window was an illusion, and I was never actually in an apartment at all. I was in what looked like a soundstage, with props to replace the ones in my room. There were more emails logging the subject’s — Morgan’s — behavior. Goosebumps. I found rooms that would shapeshift similar to the Clockwork Mansion in Dishonored 2 to better facilitate the false journey I was making daily to the Yu’s facility. To what end Morgan was being manipulated, I’m not yet sure.

From here it became more equivalent to what you’d expect from a System Shock sort of game, especially once I found a giant window that revealed I had been on a space station since the beginning. Audio logs, emails, passwords, non-linear paths, and finding your own way to progress all became familiar, but modernized and crisp. The UI is sharp, the graphics are smooth and clean, never stuttering (keep in mind I was playing on a high-end PC), and the music was a combination synths and pulse-pounding percussion that made every encounter with the shadowy aliens intense. While at first I was just whacking them with a wrench, I eventually found the GLOO cannon, which can be used to freeze enemies, create your own platforms to bypass obstacles, and put out flames or electrical currents. These varied uses lead me to believe I’ll be using this quite often instead of only situationally.

Once I found my first neuromod, I saw how the skill trees would flesh out character development. The abilities on the first three trees range from better hacking, the ability to repair devices such as turrets, and better combat proficiency. Three trees that I wasn’t able to look at in the demo were for alien abilities, like mimicking objects as your enemies are able to (wanna turn into a cup and roll through small spaces? WELL NOW YOU CAN!). Lead Designer Ricardo Bare made an interesting comment about how taking too many alien abilities can lead the station’s defenses to believe that you’re an enemy, so balancing which powers you choose is more than just a build choice. 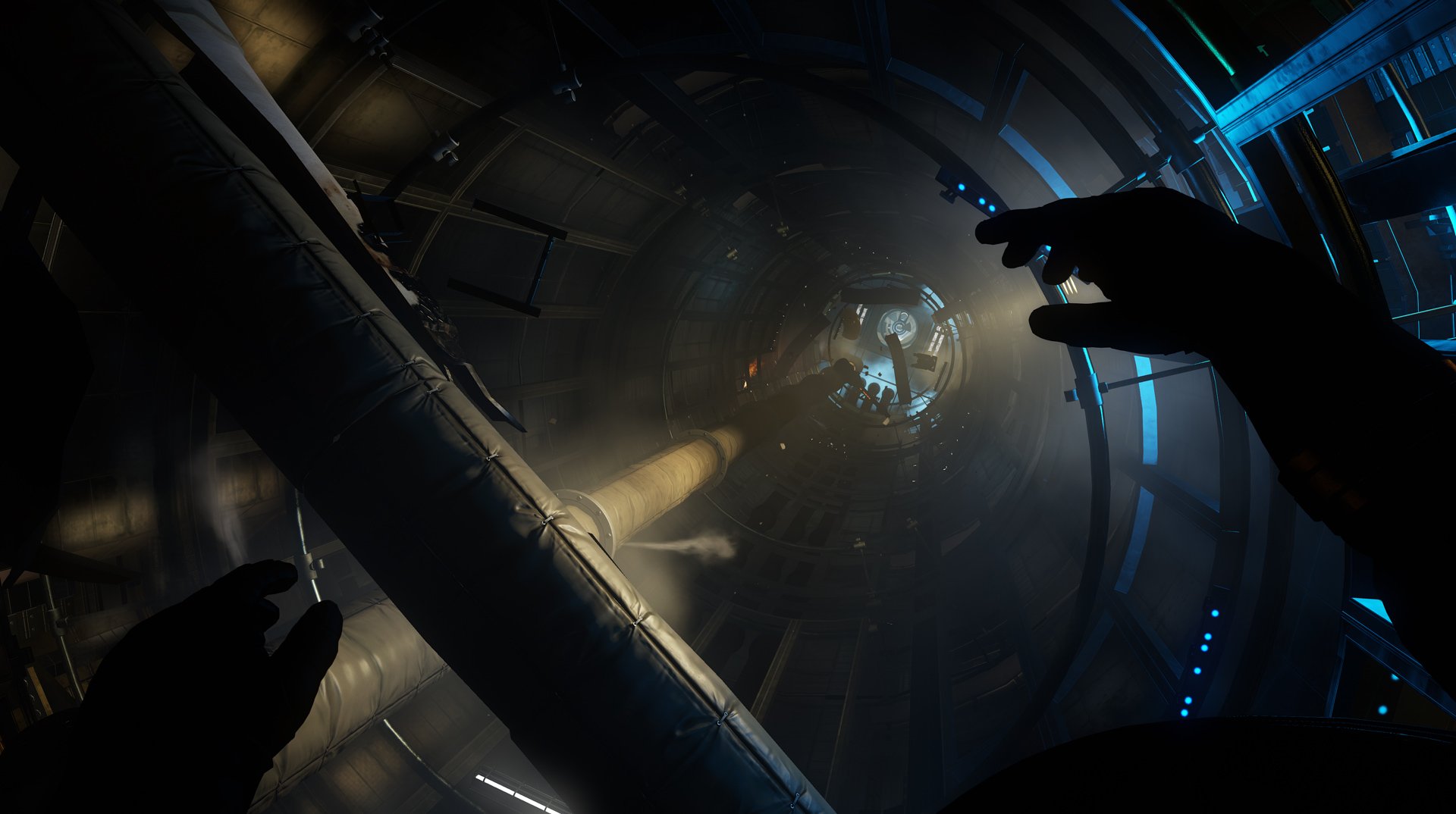 In a cool touch, all crew members on the ship have an actual name and identification trackers on them. I found a crew registry that told me whether or not members were dead or alive as well as their locations, leading to a slew of sidequests. Bare said that even the ones who are said to be alive could be in mid-transformation to a Mimic, so you may have to fight them to finish their sidequests. How you treat these surviving members also leads to a branching path later in the game. Bare was quick to say that this wasn’t simply ending A and ending B, but a clear split that happens later in the game.

Though I was fenced off in one main hub area, later in the game players will have to cross the entire station to accomplish their goals. Arkane referred to Prey as an open station game. Even in the limited area I was in, I was surprised by the amount of freedom I had. I needed to reach the highest floor, and though I could have gone through the labyrinth of rooms to get in there, I decided to use the GLOO cannon to make platforms up to the top. By doing this, I missed out on a bunch of rooms that I returned to later, but I like that you can break the sequence somewhat and do what you want on your own terms.

Item management is done in creative way as well. You can see all items on a body or in a drawer just by mousing over it, which helps to mitigate some of the minutiae often involved in looting. All junk items can be broken down into synthetic materials, organic materials, and the like at fabricators. If you find the license for an item or weapon and have the necessary components, you can create it. If I had pumped more neuromods into weapon upgrading, I could have made my shotgun better. I look forward to seeing how deep this well goes. 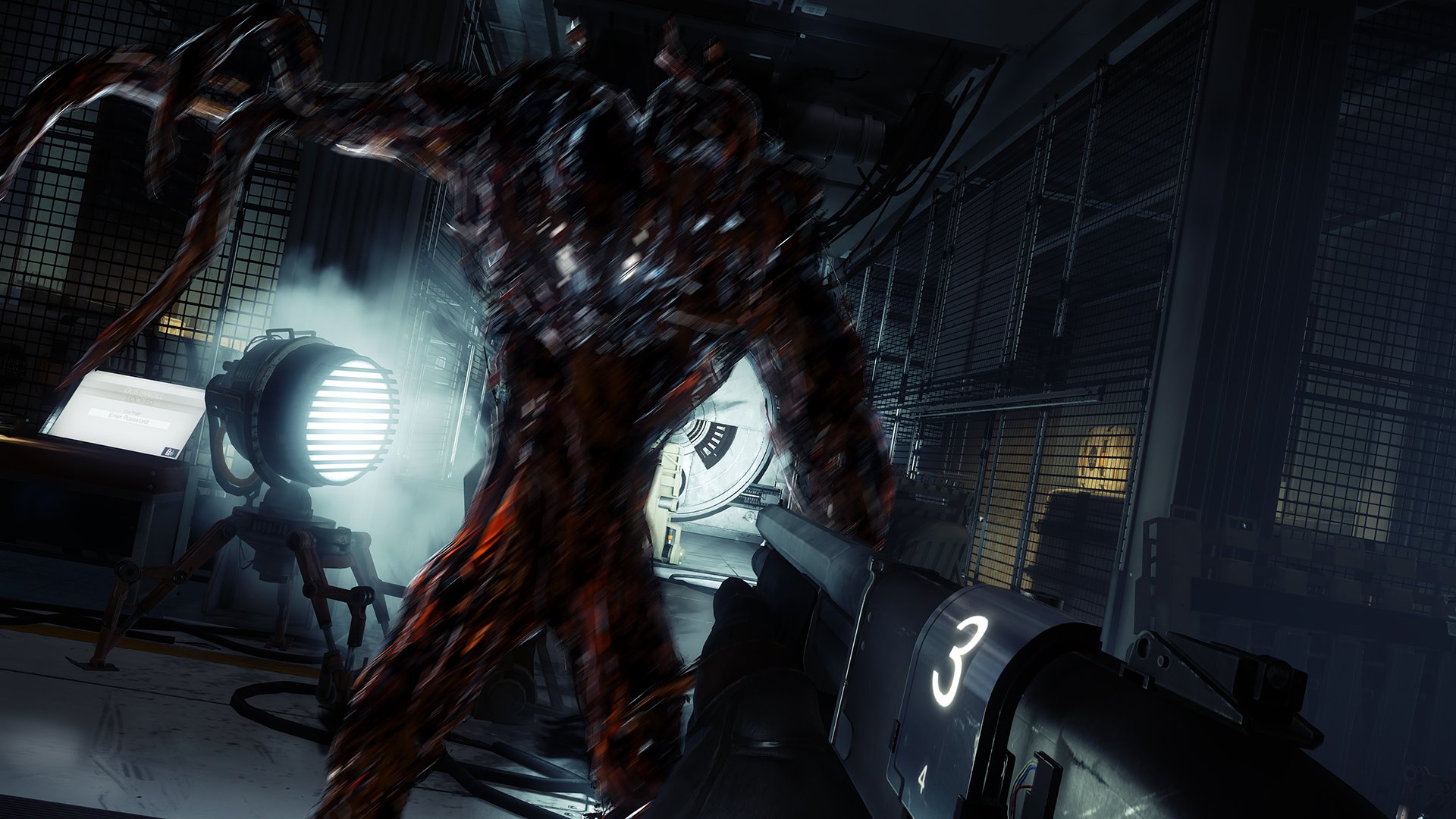 There’s a fluidity to movement and combat that I thought might be lacking since the nueromods imply a certain to degree of RPG-ness, but I was sliding around and vaulting over cover to take out the Mimics and their bigger, scarier brothers, the Phantoms. I particularly liked that even when I had a shotgun, there was never a ton of ammo. This could change later, but at least in the demo I felt like I really had to scavenge to have a shot at survival.

The Mimics do seem a tad generic at first, but when they used their titular ability to become random objects in the room, a delicious paranoia was fostered within me. To anyone watching over my shoulder, I probably looked a little weird when I started wrenching every stool I came across just in case it was a morphed alien, but hey, better safe than screwed. I only came across two enemy types, but I imagine as players branch out across the station, the Mimics will find new ways to destroy our best-laid plans.

The story portion of my demo ended when I found a visual recording of myself, telling me that the blanks in my memory were due to neuromod use. Right when hologram Morgan said “You’re not going to like what I have to say next,” Alex remotely deleted the file, saying he thought he had gotten rid of all of those. He said that he wants a chance to explain himself, but he’s preoccupied at the moment. His regret is obvious in his voice, and I was left excitedly wondering where the hell this is all going to go.

Prey comes out May 5, 2017 for PC, Xbox One, and PlayStation 4. If the full game can continue the wonder and confusion in this demo, I can happily let Prey 2 go.