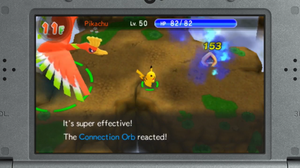 Though I’m not one of them

Plenty of information on Pokemon Super Mystery Dungeon was shown off on today’s Nintendo Direct, some new and some known. Footage depicted players teaming up with legendary Pokemon like Groudon while walking around, which looks silly considering the size difference. They also showed off the Connection Orb, which allows players to acquire new quests as they progress and befriend more and more Pokemon.

Coming with the game’s release on November 20 is a free 3DS theme for those who purchase the full game. I’m not a big fan of the Dungeon series, but I have to admit that the theme does look slick.