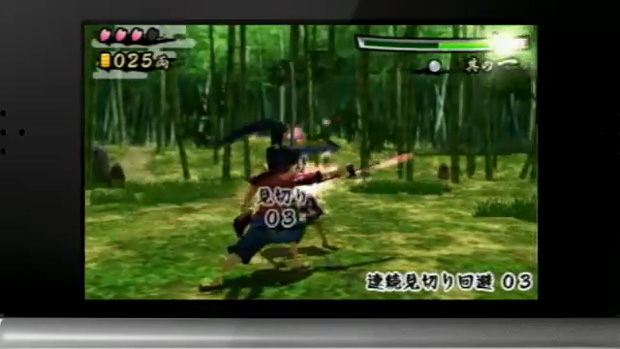 Among the news at the recent Nintendo Direct conference — where the PictoChat-ish app Swapnote was announced — a new title called Nimble Sakura Warrior for the 3DS eShop was revealed. The game places you in the role of a wandering samurai as he chops down foes, though battles aren’t a simple hack-n’-slash affair. In a similar fashion to Punch-Out!! or Infinity Blade, movement during battles is limited; you have to dodge at the right moment with the slide pad and counter with buttons.

I’m digging the art style of the game, which looks like a blend of Mystical Ninja and Captain Rainbow. Characters have strange geometric heads like they were Muppets or something. It’s great! Combined with some good ol’ reflex-based action, Nimble Sakura Warrior sounds like my cup of moonshine.

The game will drop in Japan in November, but no overseas release has been announced yet.

Nintendo’s Downloadable 3DS Samurai Game Is All About Dodging [Siliconera]