It’s a dream and a nightmare at the same time

Ocarina of Time is one of those incredibly well made games that just never clicked with me. Maybe it’s because it was too much like A Link to the Past, except everything looks worse and takes longer to do. Maybe it’s because the game’s theme of being a child and an adult at the same time is something I can’t relate with. Either way, I’ve tried repeatedly to finish the game and I always lose interest well before the end.

I have the exact opposite relationship with Majora’s Mask. Like Earthbound, it’s a game that I have not been able to stop playing since it first came out over 15 years ago. I think about it pretty regularly, and talk about with people who aren’t at all interested in the topic at least once a month because I can’t help it.

Majora’s Mask is a game about do-overs. It actually feels like a do-over of the game that came before it. Ocarina wanted to be about being an adult, but in the end, it was just about being in an adult’s body while living like a child, experiencing the best of both worlds. Majora’s Mask does the opposite. It’s about having to live like an adult and being treated like a child. It’s about learning from your mistakes, being empathetic, and knowing that every second you’re on this planet is another second closer to your inevitable death.

One of the weirdest things about becoming an adult is discovering that so many things are totally awful and few people notice or care. That guy on the street is homeless and starving. Ah, don’t worry about it. Someone else will take care of him. There is poison in our food but we keep eating it because it tastes friggin’ delicious. Ah well, you can’t live forever, right? People are getting killed right now and we might be next. Bummer. Did you see the new Game of Thrones? [Blank spoiler] character got killed and I was so sad that I cried for real.

This is our world. This is also the world of Majora’s Mask. A giant, angry moon is clearly hanging over our heads. It’s getting closer every day. I think it’s going to kill us. Should we do something about it?

Maybe, but I’m really busy with this thing I’m working on now. Get back to me later. 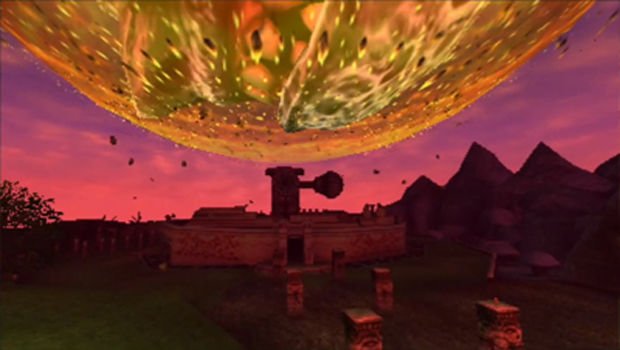 Looking to other adults and saying, “Jesus Christ, aren’t you seeing how terrible this is?!” is a pretty common occurrence. It’s largely because adults often don’t feel the same alarm kids do when things are going wrong. When you’re a kid, everything feels clearly color coded between “good” and “bad.” The rules are well known and enforced. You can practically hear dramatic music playing in the background of your life when you’re in trouble, and happy clown music when things are going your way.

As an adult, things aren’t as clear. Consensus on right and wrong is harder to find. It’s up to you as a grown up to decide for yourself what’s safe and what’s not. That’s Link in Majora’s Mask. He’s the only one who truly sees the danger. Sure, there are a few politicians and religious characters who are also aware of the pending Armageddon, but they mostly just talk about it, or in some cases, cry about it. Link is the one who gets that we’re about to die, and is willing to try to make a difference. He can’t sit back and wait for others to take care of him. He has to take care of himself, and in doing so, everyone else. It’s a challenge that’s simultaneously scary, strange, beautiful, and anything but simple. Ask any interesting adult about their lives, and they’ll likely use the same words to describe it. 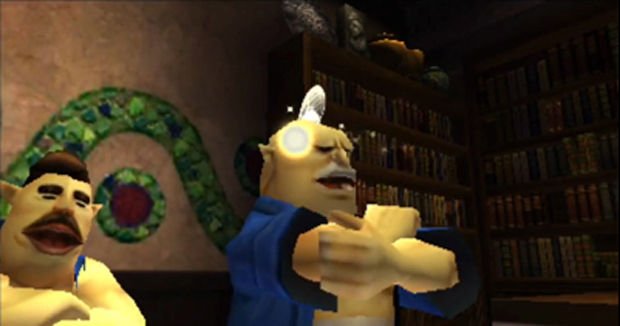 People can see you, but can they see you?

Majora’s Mask is the canonical sequel to Ocarina of Time, at least in one timeline. That means that in this era, Link has been an adult before. He’s also saved the world before. No one sees that though. To the people of Termina, Link is either an unremarkable kid, or an unwelcomed outsider, depending on if he’s hanging out with humans or not. The only people who seem to respect him on-sight are other kids. After a little initiation test, they indoctrinate him into “The Bombers,” a street gang of philanthropic stalkers. Unlike most adults, the Bombers aren’t wrapped up in their own petty little problems. Instead, they’re wrapped up in everyone else’s petty little problems. They keep a close eye on the comings and goings of everyone in town, regardless of how well they know these people in real life. If only they had a hashtag. Maybe then they’d have the visibility they need to make a difference.

That’s the dream anyway. Reality is different. In fact, visibility often makes things worse in real life, as it clouds out messages due to excess noise and distortion. Still, the instinct to be seen is something that almost all young adults have. It’s part of the old “identity vs. role confusion” stage of psychological development, as theorized by psychologist Erik Erikson. Majora’s Mask messes with a lot of these stages, which is a topic probably best tackled at another time. 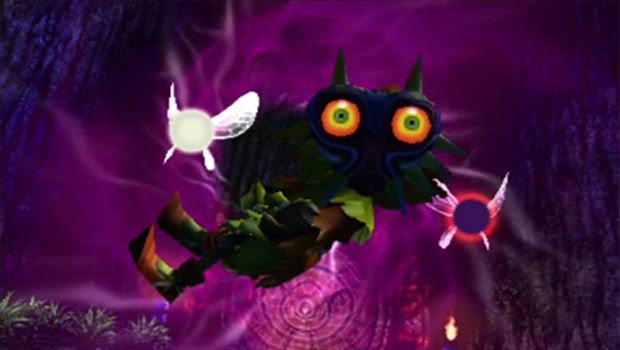 Regardless, being denied visibility is frustrating for more than just developmental reasons. If people knew Link was the one who saved the world in Ocarina of Time, if they respected him as an equal, then maybe they’d listen to him when he says that the world is about to end. This is another way that the game simulates the experience of young adulthood. As a kid, you might guess that every adult gets treated with respect. In reality, going out into the world expecting people to automatically think you are a smart, respectable, cool guy, just because you’re a grown up will lead to immediate disappointment.

This is where the whole mask motif fits in. Link learns that being seen for who he is physically won’t get him far. He is forced to start manipulating situations by appearing to be who people want him to be. He learns to adjust his outward identity to best fit the setting he’s in. It feels dishonest at first, like an imposter complex. With practice, Link learns he’s not an imposter. He’s just expressing different sides of himself, first out of necessity, later out of genuine joy.

It’s not always easy though. In fact, it’s usually painful, at least during the initial transition. That changes in time. With practice, Link gets comfortable with the masks in his life, using them to connect with people of any race, age, or gender. While these people aren’t seeing everything that Link is, they are seeing a side of who he really is. It’s through this process that Link changes the world. 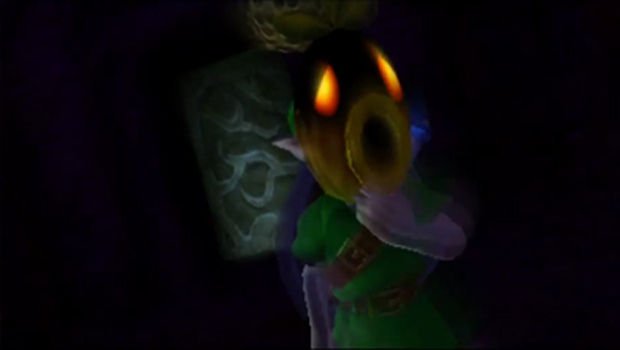 All things are made from minutia

Majora’s Mask gets a lot of people down because most of the game doesn’t tell you where to go and what to do. You can take on most of the game’s challenges in any order you want, or end up wandering around with no idea what to do for hours. Some of the most important things you need to do in the game involves helping random strangers to communicate with one another at very specific times, or putting some random set of variables together and just hoping that it was a good idea. These are things that anyone could do, but only Link would do, because Link is the kind of person who cares about these things.

Earlier I mentioned how Link is the only person in Majora’s Mask that gets how bad his big picture is and how the difference between good and bad isn’t always clear in adult life. The same goes for seeing the differences between “important” and “unimportant” things. It gets pretty cloudy as you get older. As a child, you know it’s important to do the things that will cause you gain pleasure or avoid punishment. In that way, childhood is like most videogames. If we’re going by Kohlberg’s stages of moral development, most children and videogames operate on the lower end of the pyramid. If you get rewarded, do it. If you get punished, don’t. 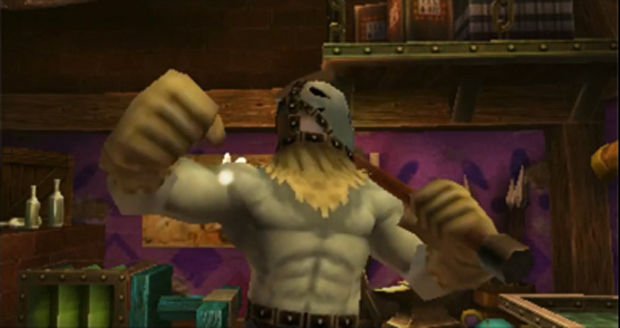 Majora’s Mask expects you to be able to access a higher level of motivation. Though the lingering fear of death is always there pushing you forward, the moment to moment decisions you make in the game are often driven by a combination of curiosity and optimism, with no guaranteed reward beyond experience. The game doesn’t tell you have to form an all fish-person rock band, or lead a parade of dogs through the town, but what if you did anyway? What if you helped that strange boy help communicate his love to an older woman? What if you did things to help people, just for the sake of helping, with death hanging over your head and no idea how to stop it?

It’s these small moments of adventure and kindness that eventually lead to the world being saved. They also lead to Link finally becoming an adult; a super powerful adult that is also a god. Most free-roaming sandbox games provide the player with the freedom of an adult while rewarding them for behaving like a vaguely organized sociopathic toddler with super powers, offering constant rewards for acting before thinking. Majora’s Mask thinks more highly of you than that. More than every other Zelda game, and just about any other game. It expects you to have the empathy, tolerance for hardship, and the willingness to live in the moment for the sake of the moment that defines emotional maturity. 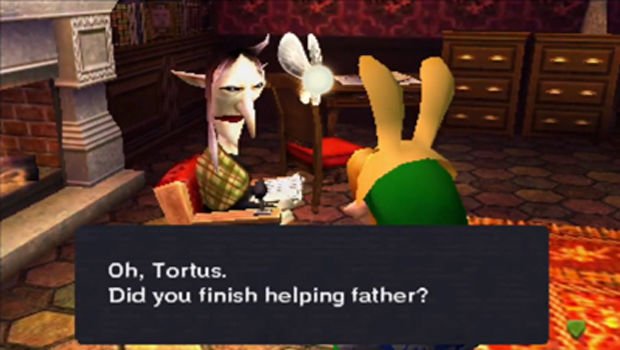 Unfortunately, you can’t go back in time to fix your mistakes in real life. All we can do is acknowledge them, accept them, and try to do better next time. We can’t rewind time, but we can do our best to not repeat past mistakes as we move forward. That was the main lesson I learned about life as a young adult. It’s also the lesson of Majora’s Mask, the game about a boy who is an adult, motivated to move forward by his impending doom, discovering himself and the world.