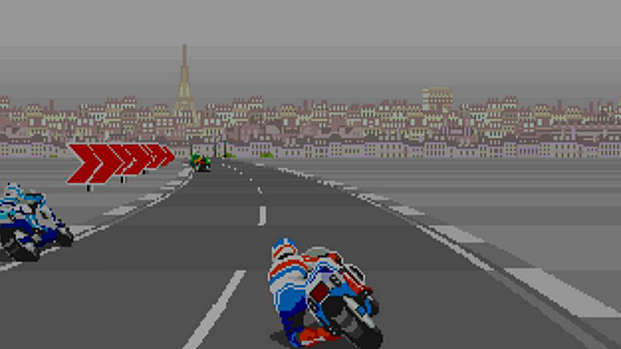 The Sega Genesis classic Super Hang-On is getting a 3D makeover for the 3DS, due out on Nintendo’s eShop on March 27 for 600 Yen.

Following on from Sega’s first 3D re-release of 3D Space Harrier, you can play Super Hang-On using the gyro-sensor and tilting the 3DS as you go round corners. It’s called the “Moving Cabinet Feature,” and as the name suggests, it’s trying to emulate the feeling of playing the game in the arcades when you shifting your weight on the bike itself in order to make that turn. It’s really a nice idea, and proved very popular with 3D Space Harrier, though I’m sure it will cause serious rage when the tracks get tough, and will ultimately lead to 3DSs being thrown at the wall.

This 3DS version also supports various screen modes, such as widescreen, and has a new difficulty mode, as well as save and replay features for novice players. It’s even got a sound equalizer for its grand total of four tracks, all of which are awesome by the way.

Hopefully, this will make its way to the West at some point as I would love to get on this and re-live the pain and joy of having the life sucked outta ya, attempting to get over that finish line on expert, but this time in 3D!