Last week, we saw the announcement of Barry Burton as a playable character in Resident Evil: Mercenaries 3D, filling out the game’s announced roster of eight selectable fighters. That means that Barry, a character who has never starred in a mainline Resident Evil title, made it into the game over Resident Evil 2 and Resident Evil 4 star Leon S. Kennedy.

Why didn’t fan-favorite Leon make it to the game? According to Capcom producer Masachika Kawata “(As for Leon) He’s all tied up for Resident Evil: Operation Raccoon City. He couldn’t make his appearance Mercenaries” which is pretty much the biggest non-answer I’ve ever read. I’d assume that Capcom is saving Leon for DLC, but in the same interview, Kawata-san stated that “At the moment no, we haven’t got any plan (for DLC)“, so there goes that theory.

So why did Barry make the cut instead of Leon? Get the full quotation and some speculation/opinion after the jump.

Most of the Resident Evil characters are cool heroes. Barry’s a little bit different. It was quite a few years ago we found out that Barry was popular in the western market. It was a bit of a surprise for us Japanese guys. But since then we’ve always thought about him. He’s a guy who thinks about his family all the time, which shows his humility. We thought he would be a unique character to play. He’s a large guy, so he can do melee by using his body. He’s also a maniac for guns. That’s his strong point. From the start of the game he is allocated powerful weapons. He’s not included as a comedian character. It’s difficult because we don’t play the game in English. The English lines may be taken in a different context when it’s translated from the Japanese. I remember him as having love for his family. In order to protect his family he has to betray his colleagues. That was an impressionable scene.

Sounds to me like Kawata-san has very little understanding of why Americans love Barry, though he seems to have some idea that many of us have spent years laughing at (not with) Capcom’s initial use of the character in Resident Evil 1. Still, just because we laugh at Barry doesn’t mean we don’t love him.

Personally, I’m all for Barry making it in over Leon, at least for this game. Resident Evil: Mercenaries 3D already has one major male lead — Chris Redfield. Throwing Leon in there would just muddle the spotlight. Barry, on the other hand, exists in his own unique area of Resident Evil history; not quite at center stage, but still positioned as a key part of Resident Evil‘s identity. Of course, it would have been great to get both Leon and Barry in the game, but if we can only pick one, then it makes sense for Barry to make the cut over Leon (and just about any other Resident Evil character for that matter). 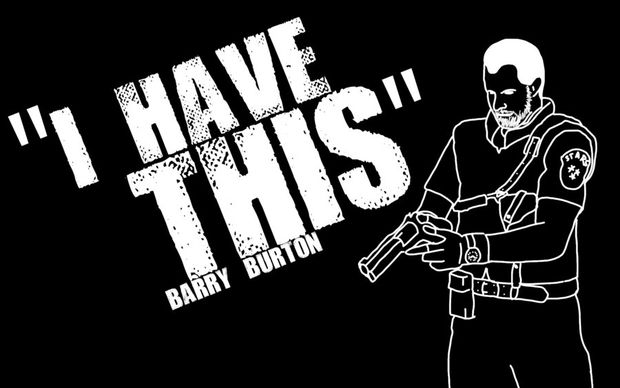 That’s because Barry Burton represents a key ingredient to the classic Resident Evil formula better than any other character in the series’s history. He embodies an entire generation of sincere attempts (and subsequent failures) by Japanese developers to capture Hollywood-style film making techniques in their games, and the hilarity that followed. The first generation of English voice acted games from Japan (like Resident Evil, Shenmue, and House of the Dead) had a way of accidentally exaggerating the the trite, cliche, ridiculous methods of Hollywood-style acting and writing that was nothing short of iconic. There is a reason why these games are still quoted to this day, while “better” acted and written games are often forgotten. It’s because they did something special, whether they meant to or not.

This style of unintentional parody is dying art in the modern gaming world. As games become more and more able to accurately recreate the experience of watching a professionally produced Western film, those “master of unlocking” moments are growing closer and closer to extinction. All the more reason to applaud Capcom for including Barry in their next Resident Evil game, while shunning the arguably more “Hollywood” types like Leon and Ada.

So shine on Barry Burton, you crazy bearded diamond of a man. As long as you keep making those overly dramatic, declarative statements about blood, dining rooms, and weapons that are “really powerful, especially against living things”, then I’ll keep paying top dollar just to hear you talk.