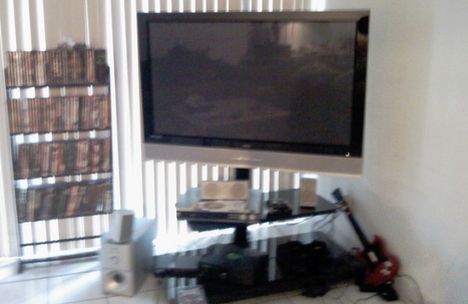 This week’s game room belongs to Mr. Wilson. He has a nice TV with a very sh*tty computer right next to it (I had that computer too, hated it), an awesome controller stand, and lots of DVDs. He also has another game room with an even better TV. Also, his dogs are adorable. Check out his blog for more pictures of his setup.

Highlights this week include The GHost making more amazing Destructoid Cards, several recaps of the Baltimore NARP, Tamz’s art, Genki-JAM’s Pokémon comics, and free touch’s Destructoid figures. Hit the jump to see all this plus many more awesome posts by the Destructoid community.

Well damn, what a way to start off the highlights this week. JACK of No Trades, the master of 3D art, shares with us a heart-breaking story of his troublesome past. Videogames have helped JACK deal with some of life’s pains.

Next up on the Baltimore NARP hypeage is Rockvillian. This classy lady shares with us a few pictures of Hitogoroshi’s epic toy room and grrlaction’s legs. Awesome.

The rest of the recaps are provided by the king of party recaps, BlindsideDork. First up, we have a montage!

Next up, we just have a bunch of random goofy videos from the Baltimore NARP.

Finally, more videos from the Baltimore NARP, this time consisting of an epic lightsaber battle.

The GHost looks to be a weekly staple here until he goes off to Africa to save children later this year (no really, he’s going somewhere over there to help kids or something). Here’s the latest batch of Destructoid Cards:

The GHost has now made 50 cards and is going to make 50 more cards before he goes to Zamarzkistyvvz. A lot of people have been wondering how the Destructoid card game actually works. That’s a good question, as The GHost isn’t even sure. So that’s where you come in! Read the post by The GHost and see if you can help out.

So far, brecksher has created a concept that looks interesting for the card game. Anyone else?

Oh boy, here we go again. Another Fap Fiction, this time involving the four Destructoid British stars. I don’t know if I should be turned on or not at the atheistium part.

Elandarex shares with us a very interesting tale. Recently, his house was broken into and his PS3 and Xbox 360 were both stolen. His Wii, however, wasn’t — and Elandarex believes the Wii was really behind the whole robbery. The shit about his stuff being stolen is true, the rest of it is him losing his mind, more or less.

-D- lovingly shares with us a story that was shared within the CBM called the Mur-gasm. Damn, I wouldn’t mind being on a receiving end of a Mur-gasm.

I mentioned Tamz on Art Attack Friday briefly and there’s really nothing else to say except that his art is awesome.

Oh, now isn’t this just adorable! Genki-JAM stumbled upon some old comics he drew when he was younger called “The New Adventures of Pokemon“.
Issue 1.
Issue 2.
Issue 3.
Issue 4.

Issue 4 was never completed. So, Genki-JAM is holding a contest. If you finish the comic, you’ll get some kind of prize. Probably.

mikeyrab brings to our attention, well, those of you in the Chicago area, an amazing-looking retro game store. The place is called People Play Games and looks to have a gigantic collection of old-school stuff.

The lovely atheistium was invited out to play Alone in the Dark over in the UK. She gives us her impressions of the game and she is so damn sexy.

Ashley Davis is one of my favorite writers to have joined Destructoid. Everything she writes is just full of win and awesome. In her latest piece, she talks about her irrational fear of water in videogames. Also, her art is awesome.

A big Happy Birthday to DJDuffy. She’s my favorite DJ who actually isn’t a DJ.

GuitarAtomik had another live show this past week, and this time he got his performance recorded. There’s a couple of videos, one of which contains a new single by Guitar.

Mxyzptlk finally got himself an Xbox 360! About time you joined the next generation of gaming, Mxy!

Holy crap! Ron Workman has a super secret to share with you all. I wonder what it could be.

This past week was also the first Dtoid Australia get together. FooLiz got some Australians together and they all went to see Indiana Jones 4. Afterwards, they all got drunk and kidnapped some sheep.

Hoygeit has made another piece of amazing art. This one is for FooLiz and is based on her love of Predator.

Happy Birthday to power-glove! For his birthday blog, pg thanked a ton of people from Destructoid. It’s a pretty epic list.

Also, a big Happy Birthday goes out to Joseph -Orcist- Leray. He’s king of the Forums and likes to cuddle in bed.

AND, Happy Birthday to Gregor too.

Be on the lookout in the C-Blogs later this week. I want to create a database or something with all of your guys and gals birthdays. What were your favorite blogs of the past week?