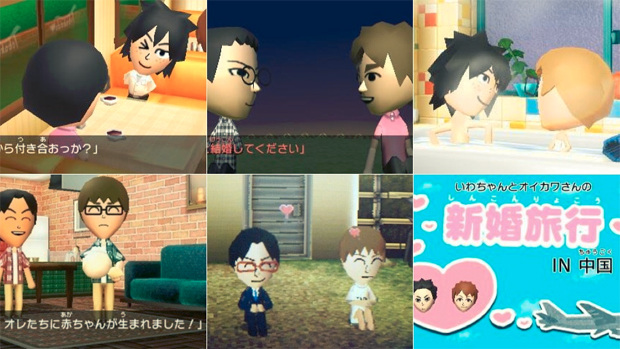 Tomodachi Collection: New Life reportedly features a bug which allows male characters to engage in same-sex relationships. Male couples can marry, raise children, and even bathe together in the Nintendo’s latest bestseller.

These same liberties do not appear to extend to female characters. Similarly, same-sex relationships weren’t an option for either gender in New Life‘s predecessor, which released for Nintendo DS back in 2009.

The life simulation title has shifted 758,575 units to date, reigning supreme atop Japanese charts since it launched on April 18. Many players are excited at the proposition of same-sex relationships in the game, driving a number of them to purchase the title as a result.

According to one fan, Nintendo customer support is aware of the issue and plans to the patch the game. Whether that means letting girls join the fun or removing the feature entirely, well, I suppose we will just have to wait and see.