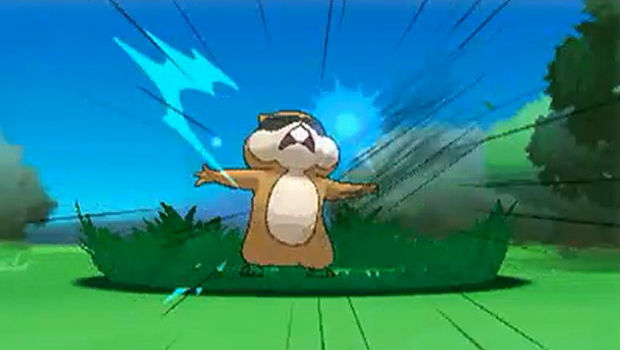 In addition to a general overview of the localization process, the Pokemon Roundtable brought about some more pertinent info — specifically, gameplay. The Player Search System (PSS) is new to Pokemon X and Y. It recognizes players passing each other by who play either game, allowing you to link up and become acquaintances. The PSS tracks both locally and abroad, and can track your friends in addition to acquaintances (which you can subsequently upgrade to friends).

Battles can be changed to specific settings, including custom rulesets. Two Pokemon new to X and Y were also featured — Skrelp (Poison and Water) and Clauncher (Water). Noivern, which was announced this morning, was used as an example of how the creators wanted to adapt the official art style into a fully realized 3D model. The Nintendogs-style “Pokémon-Amie” feature was discussed, basically re-treading on information we knew this morning, like an increased bond with your Pokemon by way of a cute mini-game. Now, we know that it’ll give you increased battle benefits like better stats.

Interestingly, a new “Horde Encounter” style battle was shown, pitting the player in a 5-on-1 situation. For this demonstration, Gogoat, Tauros and Axnew were shown. “Sky Battles” are also a thing, mostly involving Flying creatures — for the demo, the new Talonflame (Fire and Flying), Aerodactyl, and the old Noctowl were demoed, as was Haunter, who was able to participate due to his levitation ability.

According to IGN’s Rich George, the prospect of multiple save files were shot down, and the idea of converting Pokemon from previous generations is “tricky” due to the DS/3DS communication barrier and they are “working on it.” In case you’re wondering, they are “exploring the possibilities” of DLC but no announcements will be made at this time (Pokemon just wouldn’t feel right with DLC), and the exact amount of new Pokemon was not given. Concepts abstract to all but the most hardcore of Pokemon enthusiasts like EV and IV will also reportedly be made more visible.

Well, this all sounds pretty interesting. We’re only a few months away at this point!