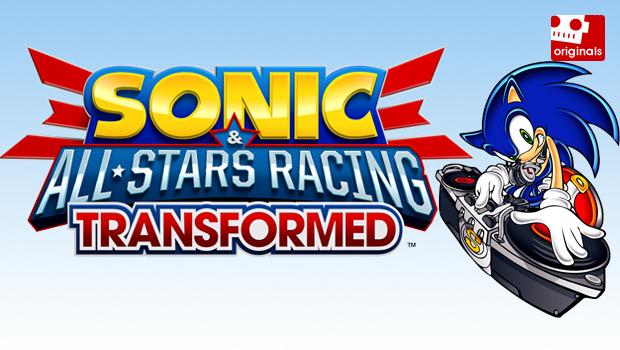 One of the greatest things about all these crossover titles and all-stars games is the chance to revisit some of the most memorable pieces of game music history and have it presented in a new light (nobody mention Turtles in Time Reshelled now, I’m trying to make a point here). There are two things Sumo Digital knows well: great games and great music. And lucky for us, the result of that has been stellar games such as Outrun 2, Sega Superstars Tennis and Sonic & Sega All-Stars Racing. The two latter titles were especially nostalgic, featuring a great selection of classic music arranged and mastered by Sega legend Richard Jacques.

Well, Sumo is back with their newest racer, Sonic & All-Stars Racing Transformed (ASRT), a sequel to the 2010 hit. Jacques has been granted even greater access to the Sega music vault for this title, and worked hard to outdo himself yet again with some kick-ass arrangements of the many franchises represented in the game.

Sega and SUMO were generous enough to give Destructoid exclusive samples of the music, and producer Steve Lycett sat down to chat about the general sound approach to the game.

“I’m sure a lot of people have seen we’re busily cooking up a new All-Star game, but one thing that we’ve not really talked about (until now!) is what we’re doing musically!

Originally I sat down and had a rough inkling of what we wanted to do, I knew with the transformation aspect we should do something that complimented it musically, but as a mere producer, I needed to call on the experts! So for the soundtrack to All Stars Racing Transformed, we’ve signed our good friend Richard Jacques and his team to work on the music, creating both remixes of classic tracks to race and original music to tie the game together from the opening FMV to the end of game credits! Again, due to the fact that the vehicles in the game can transform between, cars, boats and planes, we also wanted to emphasize this with the music.”

“It was clear Jacques knew and understood right away what was needed for the game and its core audience, plus he’s got the technical know how regarding interactive music to make it all work together in the game. The second we heard it, it was an easy choice for us!

Plus with excellent timing, he’d just setup a fantastic new studio facility right in the heart of London where he and his team could work on the soundtrack. It also doesn’t hurt that it’s surrounded by some excellent pubs! We began the process by sitting down and discussing the various characters and IPs that were going to be featured in the game, and how the various circuits would look and feel.

Once the remixes were largely complete, we tested out the implementation that we had planned for when the vehicles transform during a race.

As this is a key game design mechanic, Richard and his team felt that he could do something very cool with the music that would really impact the vehicles transformations. So after some technical testing, Richard created an additional set of ‘transform’ files, which feature various processing and additional production methods of the music tracks, giving us a superb effect to highlight the transform maneuver before continuing with the music.

Finally, if this wasn’t enough, the final step was creating brand new front end music and themes to tie the whole soundtrack together. Richard and his team then worked on the final production and mixes of all the music tracks, adding live instruments where appropriate, and giving each mix a final layer of polish. I can safely say he has done the fans and the classic original tracks proud. There is a huge amount of variety in the soundtrack, some classic old fan favorites as well as some new tracks and a few surprises.”

Picking the right music for the game

“So we created a short list (which was incidentally very long!) of tracks that we all thought would be a good pick for the game. Our main criteria were finding tracks that would be purely iconic to each franchise, and that would please the fans, and also tracks that would be very suitable for remixing. We have also thrown in a few surprises for good measure too! After creating our shortlist, Richard then created various temporary edits of the original material to ensure it would work within the game.

After a period of licensing and music rights clearance issues, we set about trying to obtain some of the original assets, so the remixes would be faithful to the original. This proved quite a challenge as some of the original music tracks are now quite old and were stored and backed up on various kinds of now obsolete storage media. Thankfully, the sound team at Sega of Japan was a great help in getting as much of the original material that existed.

To give you and the readers an idea of both the process involved and a sneak peak at the final results, here are some explanations about a few of the tracks, featuring the original and the new ASRT remix:

The OutRun Bay circuit in ASRT features a remix of ‘Splash Wave,’ one of the original music tracks from the original Outrun arcade game, created way back in 1986.  This is probably one of the most iconic Sega tracks to date, and has been remixed many times before, not least by Richard for OutRun2!

As there was no original music data available, Richard and his team had to re-create the music from scratch, simply by listening to the reference WAV file that we provided. As for all the remixes in ASRT we requested that the music and remix style was updated whilst remaining faithful to the original track. We didn’t know exactly what Richard was going to do with this track, but upon visiting his studio he played us a work in progress version, which featured both some awesome dub step and drum ‘n’ bass influences.

It just seemed to WORK! Richard told us ‘I had to be sympathetic to the original, and choose styles and influences that work not only with the instrumentation of the original track, but also the tempo is quite a big factor, and being a racing game I wanted to make sure that the track had enough energy to work with the game. Working with a 26 year old piece of music was certainly a lot of fun as I remember playing OutRun in the arcades way back in the day.’

For Jet Set Radio, and in true style of the original soundtrack, Richard created a mashup of Hideki Naganuma’s ‘That’s Enough’ and his own track ‘Everybody Jump Around’ from the original Jet Set Radio soundtrack. ‘Each track needed beatmatching and then there were some extra samples thrown in and additional production put onto each track, giving them a new twist,’ Jacques told us.

This soundtrack is now getting on a bit but is an incredibly iconic part of the original Golden Axe franchise, and so it was important we included the main theme. ‘We had to reprogram all the orchestral elements from scratch and provide some additional orchestration before we could begin the actual remix work, adding various layers of electronic elements. It was no easy task,’ Jacques noted.

You are not going to believe some of the music we’ve managed to get into the game and I am sure the fans will agree this is without doubt, the best soundtrack we’ve included in an All-Stars game to date!”

Sonic & All-Stars Racing Transformed releases on November 20, 2012 on all major platforms and handhelds. A soundtrack releases is rumored, so cross your fingers!