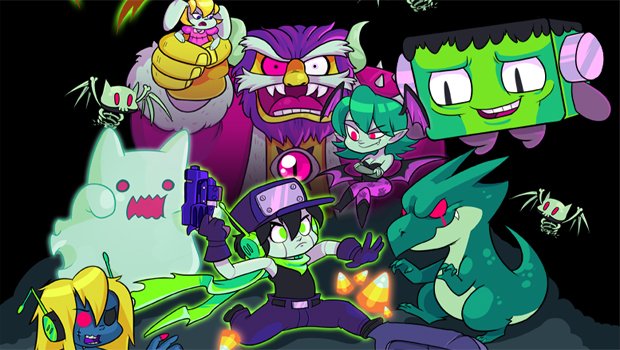 Whoever drew that Falcor sprite is a genius

Due to some technical issues, we may have some trouble getting you the full re-run of last Sunday’s Sup, Holmes any time soon (though the podcast version is on iTunes.) It’s a shame too, as our guest Tyrone Rogriguez, President of Nicalis, was quite generous with the exclusive news drops. At the very start of the show, we got the first official announcement of the Cave Story+ Halloween update/sale for Steam, which is literally the greatest thing ever.

Every character and background has been redrawn to celebrate the holidays, with redesigns that range from the appropriately spooky (knife wielding frog-man becomes Chucky from Child’s Play) to the appropriate (Cthulu becomes… Cthulu) to the unexpected (fishing Mimiga becomes Darth Vader, ) to videogame related (Curly Brace becomes Samus Aran). There are too many horror film, videogame, and Halloween related references here to even begin to list, but if you really want to get spoiled, check out some of the sprite sheets provided by Cszuslik and see for yourself.

Not one, but two Darkstalkes references? Amazing.

That was just the beginning of the news cavalcade. We also got to hear about potential updates for Cave Story eShop, the latest on the development of Aban Hawkins and the 1,001 Spikes (now planned for more consoles!), Cave Story creator Daisuke “Pixel” Amaya’s new project, the chances for Yatagarasu going online, a launch window for the DS/3DS version of Ikachan, and more, all provided for you below in convenient bulletpoint form.

* Along with the all new Halloween graphics and pre-existing Christmas themed re-skins, this new update for Cave Story+ on steam also includes a special Machine Gun Challenge mode, and at least one new Halloween themed song remix..

* Ikachan, is hitting DSiWare and the 3DS eShop simultaneously. This new version of the game will have new enemies, areas, and other content. The eShop version will also feature a new aspect ratio, similar to the display utilized with Cave Story eShop. Both versions will (hopefully) be released in December.

* Nicalis is looking into a Holiday themed update for Cave Story eShop, to include the Christmas themed re-skin from Cave Story+ on Steam. It’s not guaranteed to happen at all, but if it’s possible, the free update will be released before Christmas.

* Aban Hawkins and the 1,001 Spikes will have +12 playable characters in multi-player Vs. mode, including Aban, his sister, his father, Commander Video from the Bit.Trip series, characters from Tempura of the Dead, and many more. The game will also feature a new multi-player mode where players compete to climb a tower and “save a maiden”. The game is now on track for release in 2013. Release has been delayed by the fact that Nicalis keeps adding new content. The publisher is also looking into releasing the game on the PS Vita and on Steam via Greenlight.

* Daisuke “Pixel” Amaya is working on a “Metroid-like” game for iOS.

* Yatagarasu was originally developed by 3 ex-SNK staff (an artist, a programmer, and a engine designer) who had formerly worked on the King of Fighters series. Nicalis is helping to make adjustments to the game to take advantage of the 3DS hardware, such as altering the backgrounds to optimize them for a 3D display. The game may have online multi-player, but only if they can get the game running with minimal lag and without other performance issues. Local multi-player lobbies are also a possibility.

* NightSky is coming soon to iOS, and will have optional touch control, tilt control, and virtual game pad and button controls.

* Cave Story has been rated by the ESRB for the Xbox 360, the PS3, and the PS Vita, but Nicalis has no current plans to port the game to those consoles. In Tyronit e’s words – “We submitted all the consoles so that we wouldn’t have to resubmit in the future, IF we ever decided to bring to those consoles.”