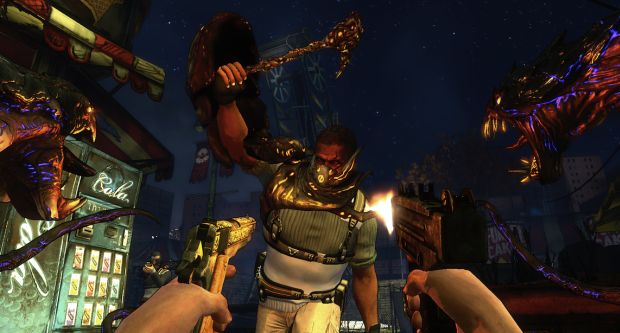 The Brotherhood aren’t simple thugs as they know the ins and outs of the Darkness. They’ll attack you with lights strung to their guns and even throw flash bombs in order to weaken your powers. You’ll have access to an upgrade system to help you against these tougher enemies and can upgrade your mystical, demon and weapons.

One of the upgrades shown off was the gun channeling ability, which channels the darkness into your guns for a rapid blaze of fire power for a duration of time. Upgrading this ability once again will allow you to see and penetrate your bullets through walls.

Gameplay was pretty smooth and the visuals are just great. I love the graphic novel-like visuals of it all. The demo ends with Jackie waking up in an insane asylum and with Victor Valente as your doctor. Does this mean that the Darkness and everything around it was all in your head this whole time? Naw, it’s probably just Victor trying to play mind games on Jackie as he tries to steal the Darkness powers from him.

Either way, we’ll find out come October 4 when The Darkness II is released for the Xbox 360 and PlayStation 3.