A new Mario platformer on any Nintendo system is always exciting, but one made specifically for the 3DS and created by the team that developed Super Mario Galaxy? Well, that’s something to really get excited about.

And from the time I had with this anticipated title on the E3 show floor, Super Mario looks to be one of the most classic (and best-looking!) games in the legendary series.

But, it pains me to say, all the remarkable promise this game has could be canceled out by one glaring issue. An issue that has me genuinely concerned for Super Mario‘s outcome. OH NO! 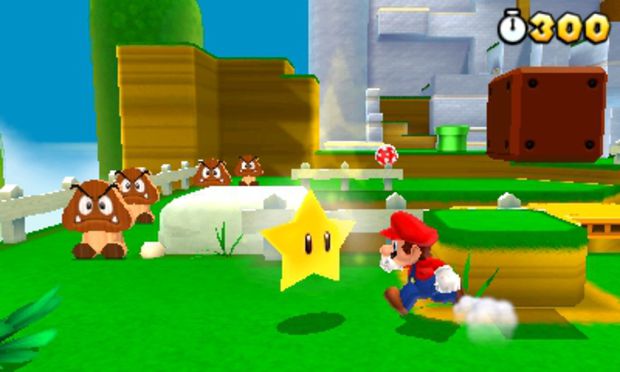 First, let’s talk about the game’s name: Super Mario. What do you think? Is it final? If so, after playing the game, it makes perfect sense. Super Mario for the 3DS combines elements from almost every earlier Mario game — mostly from Super Mario Bros. 3. Because of this, the name “Super Mario” makes sense. It kind of embodies everything about the series in a simple name, just like the game!

I will get to the main issue I had with the game at the end of this preview. The good news, everything else about this game is fantastic. Like, beyond fantastic.

Visually, the game looks amazing. The graphics are polished and colorful, and the 3D really is a sight to behold. And, even better, as good as the game looks with the 3D turned on, it looks just as nice with it turned off. 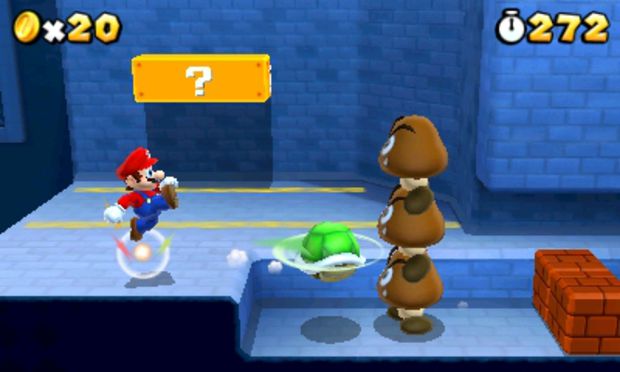 And, speaking of the 3D, Super Mario really takes advantage of this new dimension. In a genius move, the game is not unplayable by any means with the 3D turned off, but it really adds a lot to the game when it’s turned all the way up.

The levels are, in a way, designed around the 3D. This is most evident in the game’s bonus sections, which are accessed by entering pipes. In these throwbacks, Mario is tasked with collecting coins and power-ups in underground sections filled with breakable blocks, just like in the original Super Mario Bros.! Even cooler, most of these pipe sections are complete, accurate recreations of the bonus levels in the earlier games — except in Super Mario, they are viewed from an isometric angle.

And this is when the 3D comes in handy. Navigating such familiar surroundings in 3D is really, really cool. It makes jumping a little tough, but that is the point. With the 3D on, all of this navigation and platforming becomes so much easier! 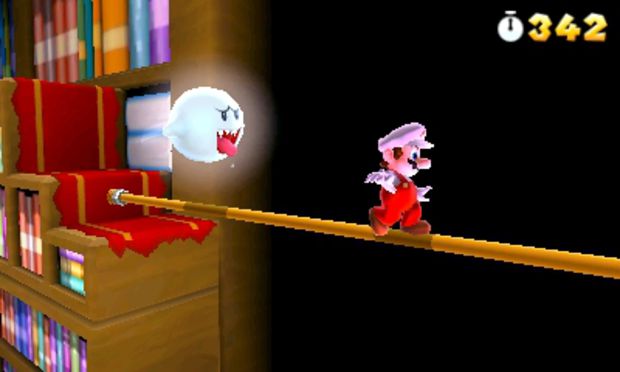 As for the levels themselves, they are a wonderful mixture of 2D and 3D. While all of the levels allow 3D movement (like Super Mario 64 and the Galaxy games), they are more linear and less about giant worlds. (Think the Bowser stages in Super Mario 64.)

I actually love this design choice, as the game feels more focused, and like a true hybrid of the old and new.

And there is a lot of “old” to love in Super Mario. As has been advertised, the Tanooki suit is back and better than ever. With it (activated by grabbing a classic Super Mario Bros. 3 leaf), Mario can swing his tail to attack enemies and break blocks, as well as hover for short periods of time, like when riding Yoshi in Super Mario World.

The Tanooki suit is RAD! 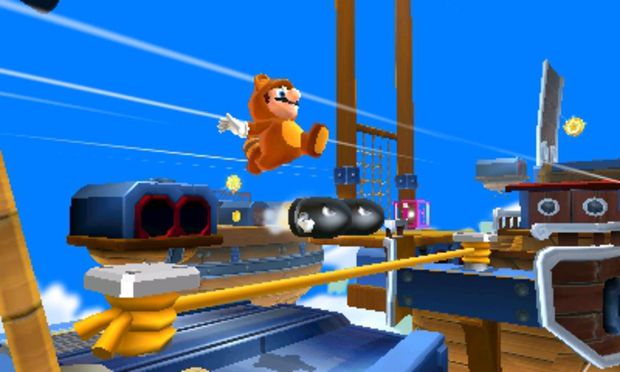 In addition to this, there are plenty of other retro goodies. The bouncing musical note blocks are back! Classic stage themes play throughout the game! Enemies not seen since the NES days return to attack Mario! FLAGPOLES! Super Mario is filled with so many old-school references and moments that it will make any Mario fan smile from ear to ear.

And with the power of the 3DS, this old stuff is combined with some amazing new technology and challenging, very creative level design.

But this challenge is where my main issue with the game comes in. 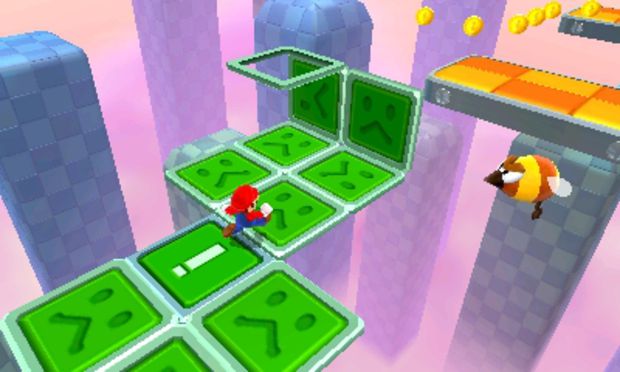 Don’t get me wrong, I love a good challenge. The harder the better, I always say! (That’s what she said!)

But in Super Mario, this extreme challenge comes from the trouble I had controlling with the 3DS’s circle analog pad.

Up until now, I have really enjoyed the circle pad on the 3DS. Sure, it doesn’t stick out as far as a normal analog stick, but that has never bothered me. In fact, I find it quite comfortable and interesting to use.

But Mario platformers are all about precise movement and tricky jumps. And in my time with Super Mario, I had a lot of trouble moving the circle pad fast enough to keep up with all the movement I was doing.

And this resulted in me dying … a lot.

And that made me sad. Especially given the fact that the rest of the game (graphics, gameplay, 3D implementation, overall design) is so superb!

But there is hope! The 3DS is a new system and I am not even really that used to playing with the circle analog pad. It could be that with time I will be much more comfortable with it and making tricky jumps in Super Mario won’t be a problem.

I really hope so. I love (LOVE!) what I saw and played of Super Mario and want this game to be the perfect experience that I know it can be.