Yesterday afternoon, I sat down with Renegade Kid co-founder Jools Watsham for one of the most laid-back, informal meetings ever. Actually, it was much less of a meeting and more of a fireside chat, only replace “fire” with “giant Gears of War 3 poster.” It was a nice change from the typical E3 hustle and bustle.

Renegade Kid was the developer of the two Dementium games, Moon, and the recently released ATV Wild Ride, all available on the DS. Not the biggest company in the world, but the folks there have a lot of heart and passion and just want people to enjoy their work. I mean, these are the cats who released not one but two M-rated DS games!

So anyway, I’m sitting here with Jools when he pulls out his 3DS and launches his upcoming title, Mutant Mudds. 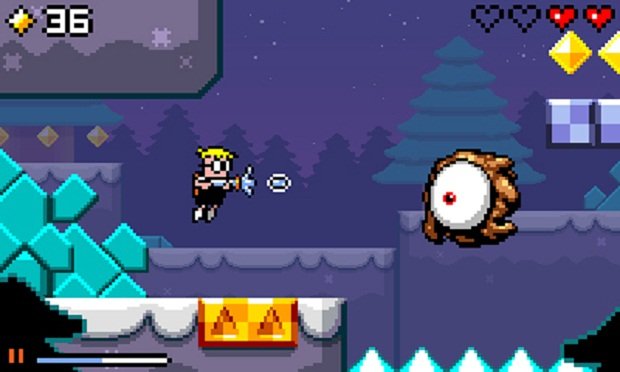 Mutant Mudds almost didn’t happen. It was originally a retail title on the DS with full polygonal graphics. That fell through, so Jools pushed for a release on DSiWare and asked fans to support the endeavor. That also fell through.

Back to the drawing board — Mutant Mudds was reimagined as a 2D sidescrolling for the 3DS. And since the 3DS eShop allows so developers to self-publish, Renegade Kid won’t have to worry about the ground falling out from under them again!

Drawing inspiration directly from classic Nintendo platformers, Mutant Mudds is 100% old-school with very few unnecessary frills. The colors are solid and rich, and the visuals as a whole give me a strong Commander Keen vibe. The soundtrack also is chiptune-tastic. As I said, old-school.

Your hero Maximilian carries around a water gun and jetpack combo that allows him to clean up enemy Mudds and hover for limited periods, respectively. The goal in each level is to reach the goal while clearing jumps, taking down foes, and collecting gems along the way. The three levels in the demo were split into easy, medium, and hard difficulties, with the harder levels being more representative of later game challenges.

Since this is a 3DS game, it naturally makes use of the 3D capabilities. In this case, it takes a page out of Wario Land on the Virtual Boy by giving you three different planes to travel along. By jumping off arrow markers, you will be launched either into the background, foreground, or middle. It’s a fun effect, but the levels I tried out didn’t quite demonstrate if it’ll serve any crazy new purpose later down the line.

The game is very chill, very simple, and just knows what it’s good at. It’s shaping up to be a solid time in the vein of the SNES era. You can tell there’s a lot of Nintendo love in here. You can check out Mutant Mudds when it releases later this year on the 3DS eShop!