We’ve been hearing TimeSplitters 4 rumors dating back to 2007, so don’t get too hyped about these most recent rumblings. They’re coming from Official PlayStation Magazine UK‘s “Rumor Machine” portion of the mag (via Joystiq), hinting that a reveal may be just around the corner.

“Gun-wielding monkeys are finally making a comeback!” it says, “A fourth Timesplitters title is to be announced soon.”

Great news if true, but again, let’s check our expectations accordingly. Let’s take a peek back at TimeSplitters 4 rumors and other false hopes over the years… 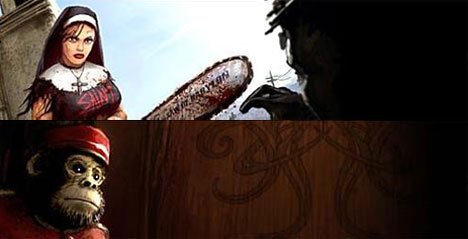 2007 was a huge year for TimeSplitters 4 hope, with developer Free Radical Design doing much of the teasing itself, well into 2008. Then in 2009, some hope was lost when Crytek purchased the developer, re-dubbing it Crytek UK. Studio manager Karl Hilton even said that they were working on an original IP, which put the breaks on TimeSplitters sequel hopes. Only a year later, we caught rumor wind that that studio was “in talks” for a new TimeSplitters…

My emotions, they are fragile. Please, let this story come to an end, and let it end with the awesome TimeSplitters sequel we so desperately want.