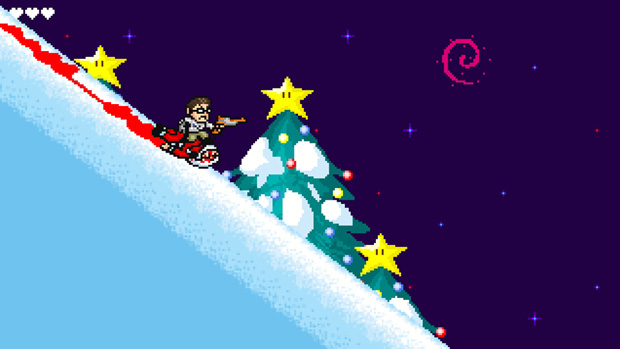 But it will make you curse your mother

Angry Video Game Nerd Adventures is a game that wants you to curse at it. It wants you to flip out and go ballistic and yell at small children. It wants to give you the experience of being the Nerd in more ways than one.

AVGN Adventures is all about “Nintendo hard,” a level of difficulty so obscene that getting through a stage is its own achievement. But you can’t have difficulty without balance, thus it tries to find company among games like Super Meat Boy and the NES homebrew Battle Kid.

All the while, the Nerd curses like a sailor.

Though published by and receiving input from ScrewAttack, AVGN Adventures is being developed by FreakZone Games, previously known for the game adaptation of Manos: The Hands of Fate. These guys definitely have a knack for honoring the source material in digital form.

Each level of the game is based on a particular AVGN episode or theme. For the demo, I was thrust into a futuristic world with nods to Mega Man, Silver Surfer, and others. Armed with an NES Zapper that can be fired up, to the side, or at a 45-degree angle, the Nerd hopped over “death tiles” on the ground and insta-kill lasers shooting horizontally and vertically.

The images in the gallery appear to be from an old build, because in the demo the Nerd’s health was represented by three bottles of Rolling Rock beer. ScrewAttack’s Craig Skistimas tells me one potential idea they have is, should you collect another beer bottle when health is full, that the Nerd will get drunk and the screen will get all hazy. But like I said, this is just an idea and might not happen.

You can also collect special items like the Glitch Gremlin, who can glitch the screen and cause all enemies to freeze temporarily, and Super Mecha Death Christ, the cyborg tank incarnation of ol’ JC who can clear enemies in a room with his heavy artillery.

You’ll also be able to recruit other playable characters: collaborator Mike Matei, theme song creator Kyle Justin, and Bullshit Man of the You Know What’s Bullshit? video series. For the demo, only Kyle — referred to as “Guitar Guy” — was available, and he was of course found hiding behind the Nerd’s couch. He is able to shoot wave beams from his guitar, which can pass through walls whereas the Nerd’s Zapper beams cannot.

Every so often, a text block will appear at the bottom of the screen with commentary from the Nerd. When you approach the Mega Man disappearing blocks, he’ll say something along the lines of, “Not these fuckers again!” But even better are the randomly generated quotes he spews whenever he dies, which liken his torment to various body fluids from animals and such.

Since you will be dying a lot, it’s nice to have something to look forward to on the death screen. ScrewAttack actually plans to keep updating the list of quotes through the life of the game, and you will even be able to suggest some of your own on the game’s Facebook page. That will ensure the Nerd never runs out of material.

For the final segment of the demo, you hop on the Silver Surfer’s board and fly through the sky, avoiding penis rockets and weird alien creatures. Then you reach the boss, the floating head from the Atari Jaguar game Cybermorph, which was covered in the Jaguar episode of the AVGN show. Before it can attack, the demo ends.

There were so many secrets and references packed in such a short playthrough, and Craig hopes to have so many secrets that people will not be able to find them for years. But the biggest takeaway is how the game literally puts you in the shoes of the Nerd. You are playing the kind of game that would give the real Nerd a hell of a time.

Angry Video Game Nerd Adventures is slated for a Steam release this year, with Wii U and 3DS versions also on the way. If you want some Nerd action on the PS3 and 360, know that ScrewAttack is trying to make that happen as well.