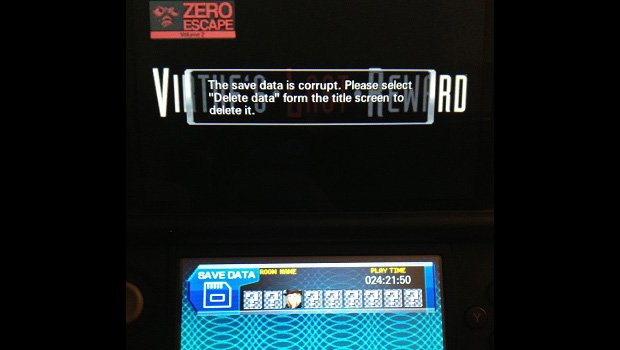 Vita players should be just fine

The good news is that, after more than 30 hours of play time, I’ve finally finished Zero Escape: Virtue’s Last Reward. Expect the review later in the week.

The bad news is that there is a game-ending bug in the 3DS version that can completely corrupt your save file under certain circumstances. According to this thread on NeoGAF, if you attempt to save during the “PEC” or “Crew’s Quarters” puzzle rooms, your game will crash and you will be forced to start the entire game over from the beginning. The existence of this bug in other puzzle rooms has not been confirmed, so you should ideally refrain from saving within any puzzle section. As long as you only save during the novel sections, you should be fine.

Having played the 3DS build myself, I can corroborate the existence of such a defect. However, since my crash occurred after saving the game at the end of a particular story branch and not while I was in a puzzle room, my file was thankfully not damaged. If you happen to get booted to the main 3DS menu and are greeted by an error message, try to reload your save as soon as possible to assess any damage.

Vita players need not worry, as this bug apparently only affects the 3DS version. It apparently plagued the original Japanese build and was brought over without being fixed by developer Spike Chunsoft. Publisher Aksys has not yet announced any plans for a patch, but I’m holding out hope.