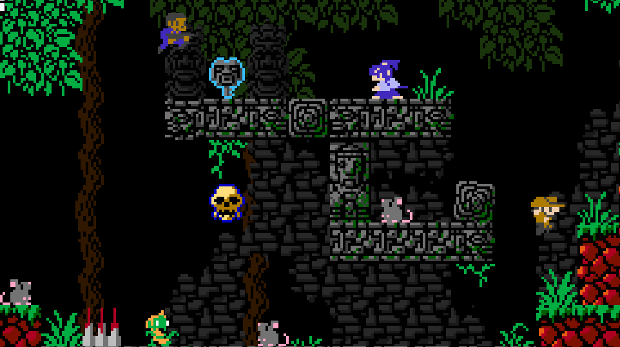 Would Subapce Emissary be better if it had tight controls, amazing level design, seamless 4-player co-op, NES-style graphics, simplified controls, and no Nintendo characters? ?If you play Aban Hawkins and the 1,001 Spikes, you can find out for yourself. Nine characters have been revealed for the game’s roster, with eight or more still to be revealed. As you might expect, each character has their own fun traits. Nyx (from Nyx Quest) has a Kirby-style flying multi-jump, Aban’s sister can hang on ledges, Commander Video (from Bit.Trip) has rainbows, and so on.

The newest members of Aban’s wild posse are President Thompson, blue-haired samurai Sugimoto, and a random zombie from 8-Bits Fanatics XBLIG classic Tempura of the Dead (free soundtrack here). Thompson has his signature machine gun, Sugimoto has his katana, and Zombie has perhaps the most useful ability of all — the capacity to take a hit and live to tell the tale. Every other character dies instantly from even the softest enemy attack, but Zombie just gets his head blown off. No big deal! One more hit after that and he’s really dead for real this time, so don’t get to cocky.

Tempura Fever has not yet been confirmed, but anything’s possible. If you want to see more, check out our play through of the PAX 2013 demo, or check it out for yourself at the Nintendo Booth at this weekend’s Indiecade.