Just like PAX last year, a ton of you made a community blog recounting your tales at PAX 09. And just like last year, I’ve (hopefully) managed to find all the blogs that were made and recapped them for you all here.

People from the United Kingdom, Australia, Europe, Canada, Mexico and from all over the United States came to Seattle to play a bunch of upcoming games and hang out in the nerd Mecca. I ran a little survey with the Dtoiders that went to PAX and unsurprisingly found out that a lot of them barely spent more than six hours on the actually show floor throughout the weekend.

So what was their main reason in going to Seattle? To hang out with their fellow Dtoiders! Find out how everyone spent their weekend of awesome after the break. 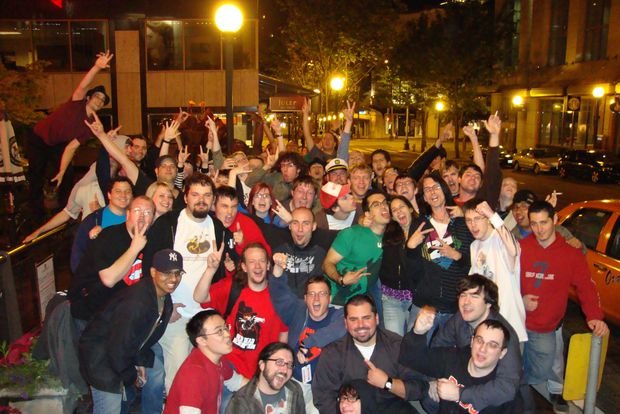 Before PAX actually started, local Seattle resident, the pelkus, held a little party over at his place. If you managed to catch the photos from the party, then you know it was one hell of a party.

the Golden Avatar caught some footage of Coonskin05 and BigPopaGamer playing some DDR at Gamework where a lot of people spent their weekend at.

This shit was beyond Pringles.

And here’s why the Destructoid panel was so awesome. Chad shared a few words on his song and what inspired him to do it.

The-mole- came out of his hole!

GraveRisen came home with a ton of swag from PAX. 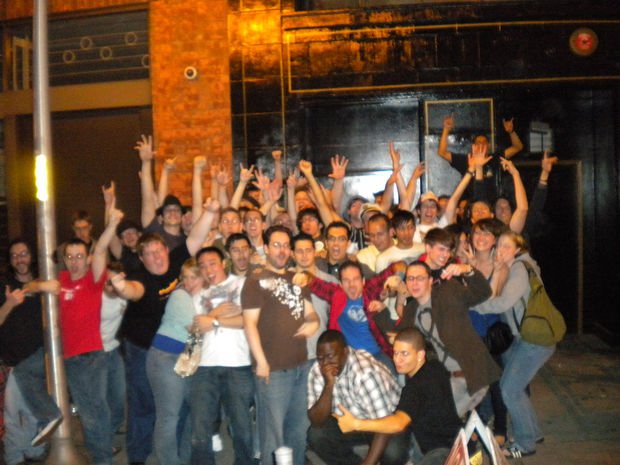 pendelton21 takes in PAX into his wide open arms. He then told us the best and worst part of PAX. Hudson’s swag was pretty lame this year.

PortugePunk took some very stunning pictures while at PAX 09 and is the one that took the picture from the header above.

Scion of Mogo described what it felt like to instantly be accepted into the Destructoid community. He was amazed by how nice and kind everyone was.

Tactix has a bunch of pictures from PAX which include his time as Mr. Destructoid. Tactix also has an awesome video montage of everyone that wore a Fedora at PAX.

Bubbles and Baubles showed off the cosplay she did for Tekken’s booth. 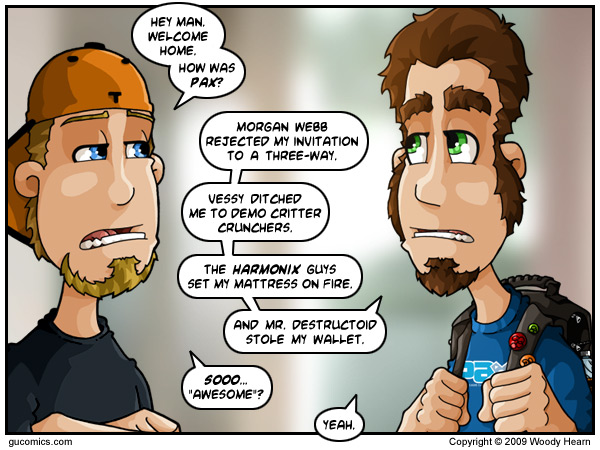 Qalamari used his recapping time to talk about specific moments from PAX.

Here’s a very thoughtful reflection on what PAX means to everyone by drewloid.

I accidentally took a joke way too far and flashed Gandysampras and pheonix-blood my junk. Yep.

blehman took a picture doing the Chad face with pretty much everyone that was at PAX.

Everyone at some point during the night busted out and sang “A Whole New World”. aborto thefetus also highlighted some of the more memorable moments from his trip.

walkyourpath and his wife had a blast while at PAX and they even brought Kauza’s avatar to with them. His avatar was an asshole though.

As Cutie Honey pointed out, everyone got Swine Flu. Cutie Honey also drew a bunch of people! Every time I saw Cutie sitting down somewhere, he had his sketch book out and drawing up random community members.

AgentMOO and his wife saw some panels, drank some lobster milkshakes and got attacked by bears.

I came home with a lot of awesome gifts from the community. A lot of it was shark themed for some strange reason.

Here’s a nice collection of photos from Senisan82.

Colette showed off the awesome Dtoid flask given to her and other Dtoid editors by Maya “bushofghosts” Kramer.

Knives did a bunch of filming while at Seattle and we should be seeing a lot of that footage soon. In the mean time, he has a couple of clips on his C Blog including one where he hits people with a trout.

Kryptinite sends out shout outs to the people he met at PAX and has some pictures from his time as Mr. Destructoid.

garison shares the love and has a bunch of pictures in his blog.

TonicBH recounted his PAX adventures in a 40 minute video.

A Holocaust rave totally happened in one of the hotel rooms.

Quisling had a wonderful time at PAX!

ScottyG had a lot to say about PAX so he did an audio blog in order to best say what he had to say. There’s also a bunch of pictures up on his blog.

rawnewdlz got everyone to do the Bboy Stance. Word up.

So, yeah. PAX was awesome to say the least. People got to see old friends from last year, make new friends this year and we all just had a blast. PAX is like a family union for Dtoiders and we’ll be seeing each other again at PAX East and PAX 2010. Until then, also cocks.